I was pleased to have the opportunity to lead the last C-EBLIP Journal Club session of the season. I chose an article which looked at the difficulties in employing performance measures to assess the value of a special collection or archives to the academic library. The article has some failings in that it is written largely from a business perspective, and uses special collections and archives interchangeably in a way that becomes problematic if you consider the archives’ responsibility as a repository for institutional records (which go through many different phases of use)—however, it did serve as a useful springboard for our talk.

What interested me was that those present immediately latched on to the problem of “What about preservation value?” when considering the article’s model of measuring performance. The article poses that the best way to measure a special collection/archives’ “return on investment” is not simply by counting the number of times an item is used (a collection-based method), but rather by reporting the number of hours a user spends working with an item, and what the learning outcomes of that use are determined to be (a user-based method) (Dupont and Yakel, 11).

In some ways, a user-centric approach to measuring performance in archives and special collections makes good sense. A single researcher may spend five weeks exploring fifteen boxes, or taking a close look at a single manuscript, and so recording the user hours spent may prove a more accurate measure of use. To reinforce this, there are a number of difficulties in utilizing collection-based metrics with manuscript collections. Individual documents studied within an archival collection are almost impossible to track. Generally a file is treated as an “item”, and the number of files in a box might be averaged. The article points out, accurately, that this imprecision renders collection-based tabulation of archival documents, images, and ephemera virtually “meaningless” (Dupont and Yakel, 14).

However, if the end goal is determining “return on investment”, user-centric data also leaves out a large piece of the picture. This piece is the previously mentioned “preservation value”, or the innate value in safeguarding unique historical documents. Both collection-based and user-based metrics record current usage in order to determine the value of a collection at the present time. This in-the-present approach becomes problematic when applied to a special collections or archives, however, for the simple reason that these bodies not only preserve the past for study in the present, but also for study in the distant future.

To pull apart this problem of using present-based metrics to measure the worth of a future-purposed unit of the academic library, we look at the recent surge in scholarship surrounding aboriginal histories. As Truth and Reconciliation surfaces in the public consciousness, materials which may have been ignored for decades within archival/special collections are now in high demand. Questions of this nature accounted for approximately forty percent of our usage in the last month alone. Had collections-centric or user-centric metrics been applied for those decades of non-use, these materials would have appeared to be of little worth, and the special collections/archives’ “return on investment” may also have been brought into question. The persistence of archives and special collections in preserving unique historic materials regardless of patterns of use means that these materials can play a role in changing perspectives and changing lives nationwide.

If, as Albie Sachs says in his 2006 article on “Archives, Truth, and Reconciliation”, archives and special collections preserve history “for the unborn . . . not, as we used to think, to guard certainty [but] to protect uncertainty because who knows how the future might use those documents”, might not the employment of only present-centric metrics do more damage than good? (Sachs, 14). And, if the value of an archives or special collections cannot be judged solely in the present, but must take an unknown and unknowable future into account, perhaps the formulation of a truly comprehensive measure of “return on investment” in this field is impossible.

A question we are frequently asked at our front desk is why we hold certain things within our special collections. How are our collection choices made? Is the idea to restrict access? And why oh why are some books that were published as recently as last year considered too ‘special’ to be taken out of our closed stacks?

We also are home to the Neil Richards Collection for Sexual and Gender Diversity. Certainly one of our most interesting book collections (and the second largest overall), the objective of the Richards collection has been to gather LGBTQ2 materials, with a particular focus on popular culture, pulp novels, queer mysteries, and Canadian queer texts. The Richards collection has grown to be the largest of its kind in Western Canada.

All of these collections have some overlap with our largest special collection of books: The Shortt Collection of Canadiana. The mandate for this collection has been looser over the years than those applied to the other collections (the Shortt collection ambitiously attempts to absorb Canadian-themed fiction and non-fiction primarily by Canadian-based authors, with a specific focus on Western Canada and Western Canadian History) In this diverse collection users can find everything from local history books (nearly one from every town in the province) to the novels of Gail Bowen, to church cookbooks, to 18th century explorers’ accounts, to current aboriginal interest newspapers, and more. While some of the items may seem too recent, or too widely or too locally distributed to be considered ‘special,’ it is the collection as a whole that has meaning, and which provides the greatest research value.

One recent addition to the Shortt collection which may fall into the “you have WHAT in your special collections?” category is two boxes of: 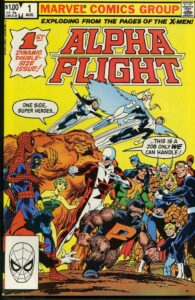 Alpha Flight? Never heard of it? And isn’t Marvel comics American anyway? Surely a sub-mandate of the Shortt Collection of Canadiana cannot be to collect comic books from the 1980’s. Isn’t that an odd fit?

This is true–comic books have not been an area of focus within the Shortt collection. Typically, any incoming comic books have been earmarked for Richards. Perhaps this is because queer comic book heroes are, in this time of the graphic novel, easier to find than Canadian ones (the Canadian comic book golden age ended in 1946, according to John Bell in his book Invaders from the North: How Canada Conquered the Comic Book Universe (2006)). Whatever the reason, we have fewer Canadian-centric comic books in the Shortt collection than we might like, and are working to remedy that situation.

So what better place to begin than with Alpha Flight? This team of Canadian superheroes, headed by James Macdonald Hudson (aka Vindicator, aka the Man with the Most Canadian Names), originally appeared in the late seventies as a part of the backstory to Marvel’s most well-known Canadian, Wolverine. The fact that the Alpha Flight team had its own decade long run of books within the Marvel universe is itself significant, given Marvel’s dominant role in the comic book industry, and given the minimal role Canadian superheroes have historically played within that industry.

The Alpha Flight books provide an amusing window on how Canadians were viewed by our American neighbors at this point in time. With characters like the Montreal-born Jean-Paul and sister Jeanne Marie Beaubier (aka Northstar and Aurora), a large hairy Sasquatch named Walter Langowski, and Eugene Judd a roughly puck-shaped bouncer from our own Saskatoon, Alpha Flight makes a caricature of Canadian-ness. Even the heroes’ costumes look like Team Canada’s Winter Olympic speed-skating apparel.

With Canada experiencing a recent resurgence of acknowledgement on the world stage (according to the New York Times, we’re “hip” now), collecting materials on what it is to be Canadian, what it was to be Canadian, and how Canadians have been viewed over time will become more important than ever. We are a nation that is constantly feeling out its own identity, and collections like the Shortt Collection of Canadiana provide a basis for that understanding.

*this blog post has been modified with permission from the author from a posting on the blog What’s That, UASC? on January 19, 2016.

**Copying and/or duplication of the above image without express and written permission from the copyright holder is strictly prohibited.