by Carolyn Doi
Education and Music Library, University of Saskatchewan

Blair, Julie, and Desmond Wong. “Moving in the Circle: Indigenous Solidarity for Canadian Libraries.” Partnership: The Canadian Journal of Library and Information Practice and Research 12, no. 2 (2017). http://dx.doi.org/10.21083/partnership.v12i2.3781

February’s journal club reading and discussion focused on this 2017 article from Blair and Wong, who write about the role of libraries in an “era of reconciliation.” Central to this paper is a focus on the historical relationship between Indigenous peoples and settlers, existing power dynamics, and systems of oppression. In particular, Blair and Wong call on library staff to “analyze their own intersectionality (situating ourselves in terms of race, class, gender, ability and sexuality), juxtaposed with the intersectional identities of the members of other communities” in order to better understand role of the library as a settler colonial institution (2). Finally, the article points us to the 2017 CFLA-FCAB Truth and Reconciliation Report from the Canadian Federation of Library Associations, which outlines four areas of inquiry:

1. Identifying best practices already in existence related to Indigenous peoples of Canada
2. Conducting a gap analysis on the Truth and Reconciliation Commission (TRC) Calls to Action and recommending an annual review to evaluate progress;
3. Reviewing existing relationships and development of a contact database; and
4. Reviewing the existing body of knowledge related to the decolonization of space, access and classification, Indigenous knowledge protection, outreach and service.

The journal club members discussed what is needed and necessary in a time when systemic racism, acts of racism, and targeted microaggressions are still experienced by Indigenous people on campuses and in the wider community. We discussed the calls for reconciliation, but not without truth and decolonization. Foremost were the challenges that we know exist in library systems and spaces, such as the need for amendments to subject heading schemas, learning for library employees, spaces for ceremony in libraries, better collaboration with communities, and representation in the library profession. At the end of the conversation, we returned to what we as individuals can do to commit to decolonization, beginning with a commitment to look for Indigenous voices when seeking out information on truth, reconciliation, and decolonization in research, media, and professional sources.

On February 9, 2016, the Centre for Evidence Based Library and Information Practice hosted Ry Moran, Director of the National Centre for Truth and Reconciliation (NCTR) for the Dean’s Research Lecture . Over the past few years, I’ve followed the Truth and Reconciliation Commission, but hadn’t really thought about what reconciliation meant to me. Ry’s lecture pulled some threads together that hit home, both professionally and personally. It felt like a punch to the gut, a personal call to action that I had to record.

Before I was a librarian, I was a historian. And I remember the last time I felt violated by the horrors humans inflict on each other. I also remember how far away those people and situations felt, and how relieved and privileged I felt to grow up in the time and the country I did, where I didn’t have to worry about institutions or individuals that went out of their way to make anyone “less than”.

Once I decided to study history, after a brief foray into early Canadian history, I focused on nineteenth & twentieth-century Europe. A course in European capitals of modernity found me in Berlin the same month the Memorial to the Murdered Jews of Europe opened. 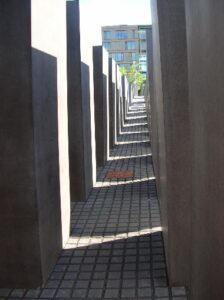 An image from the interior of the Memorial, looking out.

It struck me then, and continues to now, the physical scars on the city of Berlin (and across Europe), and the mostly invisible scars on the people – scars imposed within a decade or so. Thinking about reconciliation in my own country has me right back in the thick of primary source research as documents from East Germany were released, and new information about the Holocaust came to light. A fuller version of history has been assembled from these primary source documents, survivor testimonials, and other sources. Much as these sources have contributed to healing in other countries, I hope we will be able to do the same. As the NCTR examines and figures out how to release the documentary evidence they’ve gathered, I hope we will, in the future, live in a country that has accepted its history. And that kids learn about it in elementary school, and researchers in all disciplines add to the conversation and as a country, we move towards reconciliation.

Today, it clicked for me. I’ve studied and researched oppression and systematic attempts to eradicate culture and religion, and felt deeply those injustices. I have stood in memorials, in my own country and others, to people I never met, who died in conflicts that happened long before I was born, and felt their stories speak to me.

I’m so grateful to those who fought very hard to bring to light what’s happened in my own country in our recent memory, and begun to take us down a path to reconciliation. I’m proud to work at a University that is now an official partner of the NCTR , and will be looking for ways to bring my curiosity as a researcher, but also as a citizen of Canada, to how I can make reconciliation. In the face of the bravery of the survivors of Residential Schools, how can I not be brave enough to face my own ignorance and take the gift being offered to me, to learn. I look forward to continuing my learning, and am starting with the 10 Principles of Reconciliation (see pages 3&4), and the 94 Calls to Action. Where will you begin your journey to reconciliation?