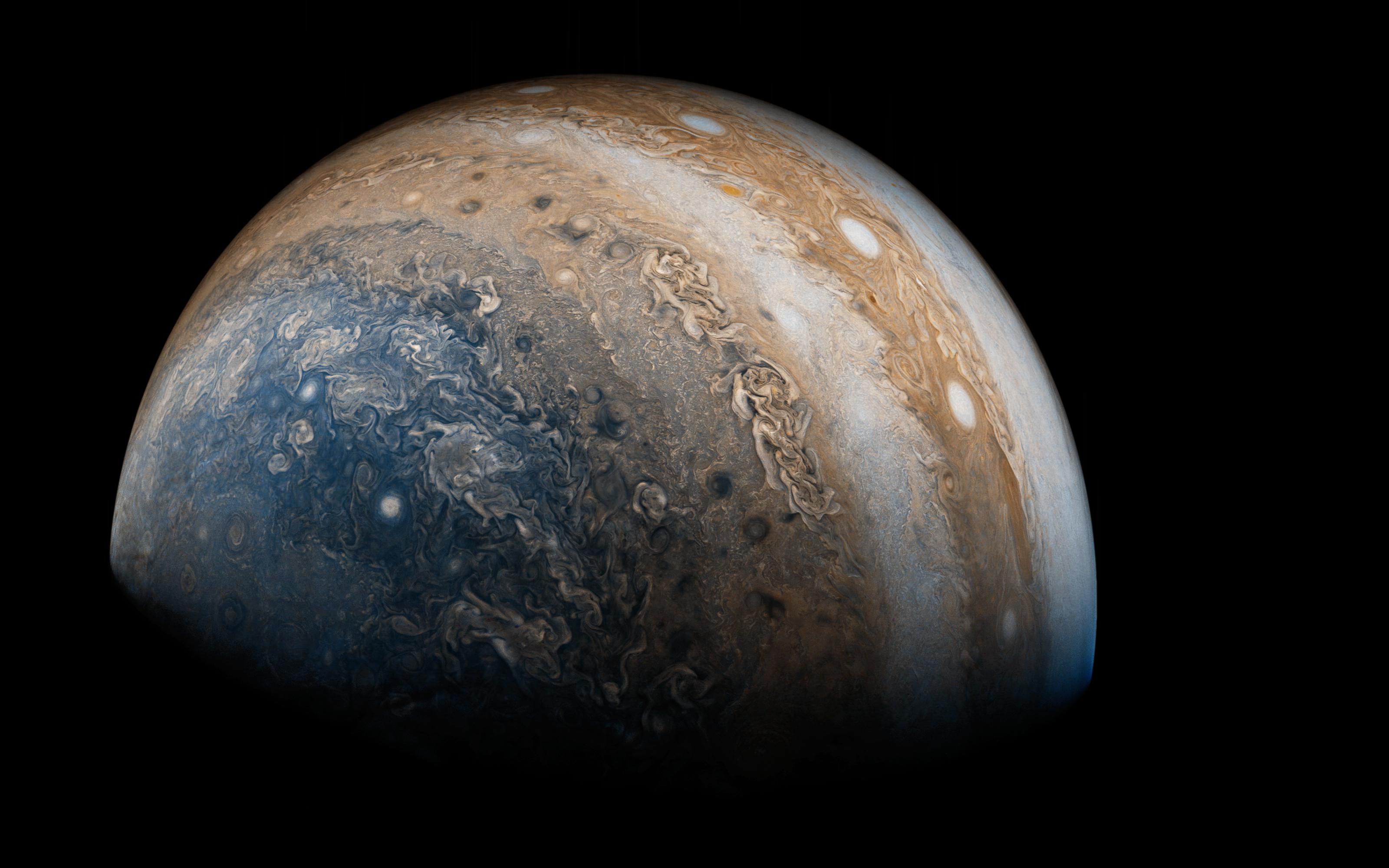 Since mankind has first looked up at the night sky, we have been filled with a sense of awe, wonder, and curiosity. For millennia humanity has looked up at Jupiter the same way and, as more is learned about the Jovian planet, these feelings only grow stronger. Jupiter more closely resembles a star than a terrestrial planet in composition, and indeed, if it had only been around 80 times more massive, it would have become a star rather than remaining a gas giant.3 In comparison, Jupiter is 318 times more massive than Earth.1 With Jupiter’s composition, relative size, and the fact that the planet has four planet-sized moons and many smaller natural satellites, Jupiter is in many people’s minds a kind of miniature solar system in its own right.3 Jupiter’s enormous size means the planet’s atmosphere is complex and experiences weather systems of unimaginable proportions. Within such a large system, these phenomena are hard to study, but it is theorized that energy within these extreme weather patterns is actually sourced from within the planet itself, rather than from the sun.2,5,6

Why Jupiter’s Weather is Interesting

Studying Jupiter’s weather is arguably fascinating. Unlike Earth, the Jovian upper atmosphere alone is hundreds of kilometres thick,1 leading to interesting weather dynamics. The atmosphere itself is roughly equal in composition to a stellar atmosphere; that is, mainly consisting of hydrogen and helium,3 which is clearly much different than Earth’s atmosphere.

The Great Red Spot is a feature that Jupiter is well known for. This giant spinning storm is a perfect example of extreme Jovian weather dynamics, as it has been observed continuously for over 300 years.3 The storm is as extremely large as it is extremely old. For perspective, the largest recorded storm on Earth was over 1600 km across with wind speed peaking around 321 km/h, whereas the Great Red Spot is over 80,000km across (more than twice as wide as the entire Earth) with winds of up to 643 km/h.2 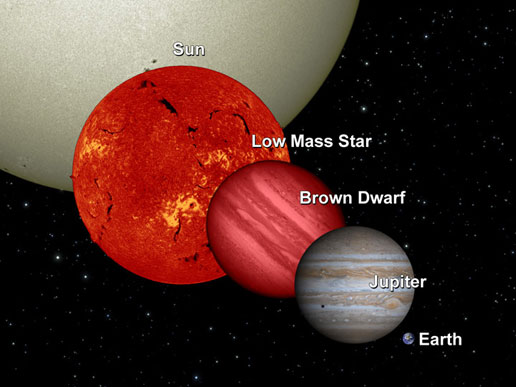 Observed from a distance, Jupiter’s atmosphere below 45° in latitude is divided into bright bands and darker zones of fast-moving jets of air.6 Jupiter’s weather is remarkably stable. These jets have been observed flowing to the east and west at nearly constant speeds for more than 100 years.6

The turbulent Jovian weather is not just skin deep however,4 and this is where Jupiter’s weather becomes even more interesting, as the planet’s massive storms and blemishes have roots stretching deep into its complex atmosphere.4 The surface of Jupiter’s atmosphere is constantly mixing with the atmosphere further down in the planet’s depths.4 Ammonia, dredged up from nearly 100 km down in Jupiter’s atmosphere, forms ice clouds which rise up in plumes to the surface.4 Between these plumes, dry air sinks down back into the atmospheric depths.4 This was discovered because the heat from deep within the planet, left over from its formation, generate radio waves which are intercepted by the ammonia, and thus the plumes become detectable in orbit above the atmospheric surface.4

As described above, Jupiter’s weather certainly is turbulent, but where does all the energy driving these weather patterns come from? Not from the Sun as, on Jupiter, sunlight is only around 4% as strong as it is on Earth.6 Observations have shown, in fact, that Jupiter emits almost twice as much heat as it absorbs from the Sun, implying that most of the driving force behind the turbulent weather patterns come from the depths of Jupiter itself.6 The heat Jupiter emits does not come from fusion within its core like a star,6 it is instead theorized that most of this energy comes from the heavier helium sinking deep into Jupiter’s core over time.6 The energy received from the Sun should not be discounted entirely however, as it has been seen that energy from sunlight plays an important role on the surface of Jupiter’s atmosphere.6 Sunlight will not be discussed in depth here as, while sunlight does affect the surface of the planet, (relatively) recent observations have shown that most of the planet’s atmospheric anomalies are caused by the heat given off from the planet’s depths.6

Observations made by the Galileo Orbiter have indicated that moist convection (the same effect that causes thunderstorms on Earth) transports significant amounts of energy upwards through Jupiter’s atmosphere.6 This was observed through lightning in the Jovian atmosphere, which indicated where the sources of the planet’s extreme weather patterns were located.5 Lightning and moist convection are intimately related.5 In a thunderstorm, water vapour in rising warm air condenses, forming clouds.5 When this happens, the condensation releases heat, causing the rising warm air to rise even faster.5 This moist convection also separates different electrical charges into different parts of the cloud, which is what eventually leads to lightning.5 This moist convection is what transports most of the interior heat of Jupiter to the exterior. These ordinary thunderstorm funnels that transport heat and energy from the planet’s depths are a major driver of the weather systems seen closer to the surface.5

The movement caused within a fluid by the tendency of hotter and therefore less dense material to rise, and colder, denser material to sink under the influence of gravity, which consequently results in the transfer of heat. 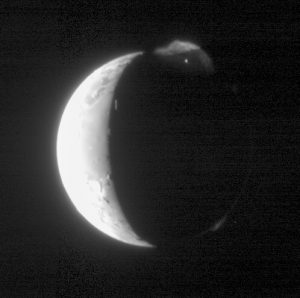 The energy from the rising plumes is transferred into the surface weather systems in one of two ways. Most often, the jets simply tear apart the rising thunderstorms on contact, taking on their energy.5 If this doesn’t happen for one reason or another, the planet’s rotation turns these rising plumes into eddies on the planet’s surface.5 Because the eddies are caused by the planet’s rotation, all eddies on the same hemisphere rotate in the same direction.5 Because of this, when two or more eddies collide they combine, rather than cancel each other out.5 When eddies combine and become big enough that they can be seen from far away, they are known as white ovals. The bigger these ovals are, the slower they move across the planet’s surface.5 For example, eddies that form at the same latitude as the Great Red Spot can move across the surface westwards as much as 400,000 km before encountering and combining with the massive storm.5 These atmospheric effects don’t last forever, however, and both jets and white ovals are maintained by these small eddies. Over time, both jets and white ovals dissipate back into eddies.5

One last important factor that needs to be discussed is how the vertical kinetic energy of the plumes is translated into the horizontal kinetic energy of the surface Jovian weather patterns. This question went unanswered until the Galileo Orbiter (discussed in the next section) gathered new data from the planet.6 The answer is that atmospheric wind speeds increase as one ventures deeper into the planet’s depths.6 On the surface, wind speeds increase from 100 km/h near the surface to 180 km/h 70 km below the surface, and continually increase at intervals after that.6 These wind speeds are more likely the result of internal eructation than cloud convection, but this is only theorized.6 Either way, the increased wind speeds at deeper depths sheer the columns of moist convection to such a degree that they are almost horizontal, rather than vertical, as they rise, relative to the atmospheric surface, and as such the kinetic energy of these storms is nearly horizontal when it reaches the surface and is taken away by the jets or formed into an eddy.6

Throughout history there have been many American missions to Jupiter. Most of these missions were flybys which supplied photographs of the planet to NASA. Some of these flybys include the Pioneer 11, Voyager 1 and Voyager 2, which all occurred in the 1970s.8 There were also orbiters or probes that travelled through the Solar System to Jupiter. These probes were sent to orbit the planet and eventually descend into its atmosphere.8 The Galileo Orbiter and the Juno Orbiter, which is a current mission, are two of the probes sent to Jupiter in recent times. The Galileo Orbiter was a long-lasting mission that helped us learn a lot of new data about the planet. It was the first probe to enter Jupiter’s atmosphere and record this advanced data from its orbits.7  The orbiter also detected new information about the moons of Jupiter and was the first spacecraft to discover a moon of an asteroid.7 The Galileo spacecraft was eventually directed by NASA to descend deeper into the atmosphere of Jupiter to be destroyed. This was carried out to protect against contamination from any Earth-based lifeforms, so it can eventually be determined whether any life has evolved in the Jovian system independently from life on Earth. Juno is a current mission to Jupiter that will hopefully bring us even more new discoveries in the years to come. The Juno mission is especially relevant to this article, as the current mission objectives include measuring the composition, temperature, and cloud motions of Jupiter’s atmosphere; mapping Jupiter’s magnetic and gravity fields to reveal the planet’s structural interior; and study Jupiter’s magnetosphere to gain a further understanding of how the planet’s strong magnetic field may be affecting its atmosphere.9 All of these discoveries will help humanity gain a deeper understanding of Jupiter’s atmosphere, with an emphasis on understanding what is going on beneath the surface. 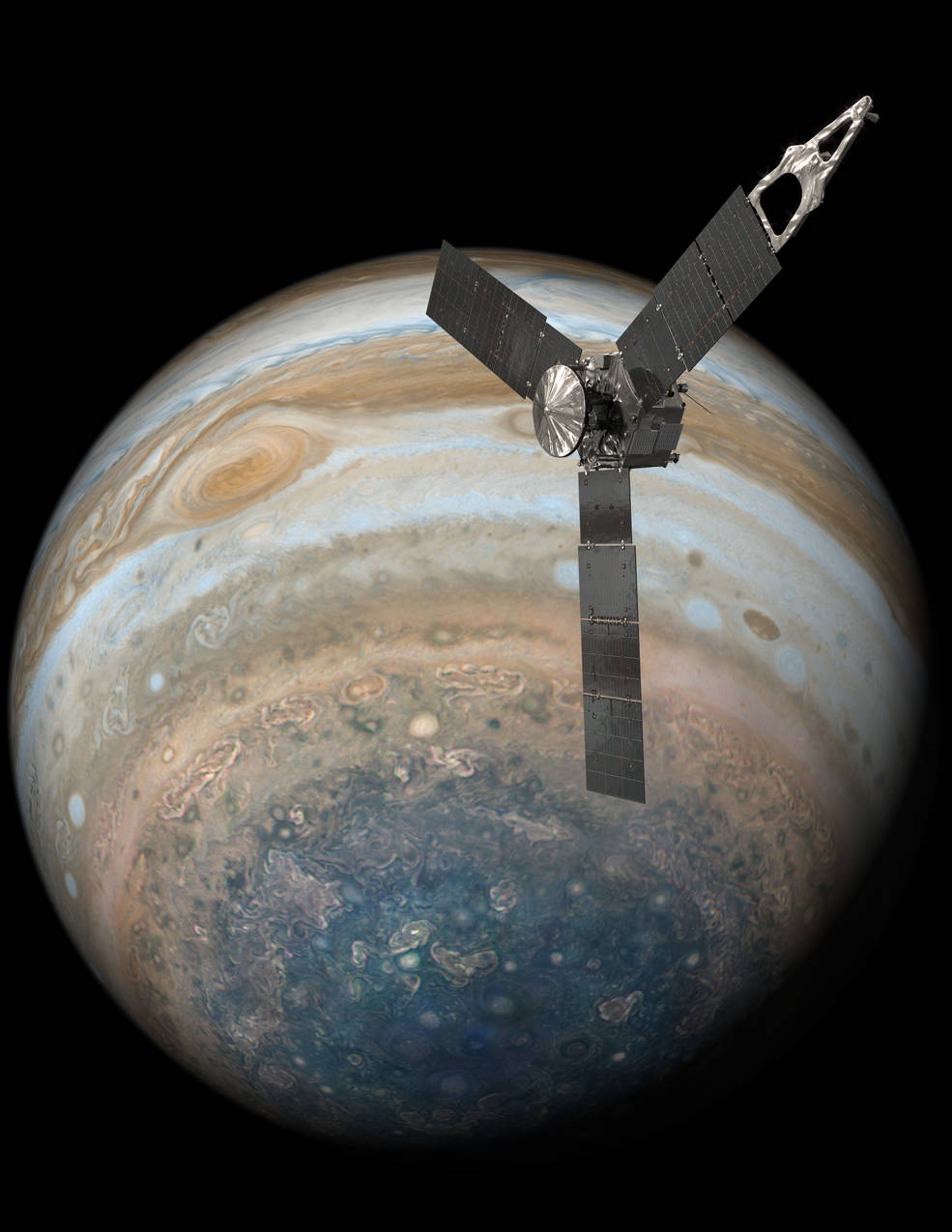 What has NASA’s Juno discovered around Jupiter so far?

While much is known about Jupiter’s weather patterns, and even more is theorized, humanity has only scratched the surface -literally- of the dynamics at play within the planet’s atmosphere. Only the first few hundred kilometres have been observed, and that is about the limit that can be reached with today’s technology. Within the next few years, the Juno mission will hopefully give us deeper insights to the internal dynamics at play deep within the planet’s atmosphere, and a give us a deeper understanding of Jupiter as a whole. Understanding Jupiter’s weather patterns in more depth could lead to a revolution of weather prediction here on Earth, most likely revolutionize the field of fluid dynamics, and of course help quench humanity’s insatiable thirst for knowledge. Whether we will one day be able to understand Jupiter entirely, or if its depths will forever be a mystery, remains to be seen, but we as humans will always do our best to grasp the unknown.