Saturn, the sixth farthest planet from the sun, is an enormous gas giant composed mostly of hydrogen and helium.[1] At 116,464 km across, Saturn is the second largest planet in the solar system and is usually recognized for its seven distinctive icy rings.[2] Another lesser known, yet, just as unique feature is the mysterious hexagonal-shaped storm clouds that hover over the planet’s North Pole. These clouds, which are continually present and consistently maintain their hexagonal shape, are entirely unique to Saturn.[3] With Saturn being a planet in our solar system, understanding the nature of its hexagonal clouds can potentially give scientists insight into our own atmosphere on Earth and how it may evolve over time. Not only that, but understanding the hexagonal formation can also explain how different altitudes impact one another and the transportation of energy in planetary atmospheres.[4] Despite these facts, the topic of Saturn’s hexagonal cloud formation is still relatively new and this paper will discuss what is currently known about why the hexagonal clouds persist, why they maintain their distinctive shape, and the position of the cloud formation.

On August 25th, 1981, the Voyager 2 spacecraft completed the second ever fly-by mission over Saturn.[5] Using its Imaging Science Subsystem (ISS), the spacecraft took several photos of the planet’s North Pole.[6] Scientists at NASA, the European Space Agency, and the Italian Space Agency created a composite of these photos and were surprised to discover Saturn’s unique hexagonal cloud formation. This new discovery, among several others concerning Saturn, prompted the Cassini-Huygens mission which was launched in 1997 and focused entirely on Saturn and its structural qualities from 2004-2017.[7] Almost all of the information gathered for this paper comes from the Cassini mission.

At the beginning of Cassini’s voyage, the North Pole was darkened due to Saturn’s winter season. However, in 2006 the spacecraft used its Visual and Infrared Mapping Spectrometer (VIMS) Instrument to capture a darkened image of the hexagon. Fortunately, in August 2009, Saturn’s North Pole experienced its spring equinox and Cassini was able to use its ISS to gather high-resolution images and much more detailed data of the hexagon for the first time.[8] Unlike clouds on Earth, scientists have been able to conclude that the hexagon does not move laterally, however, they are still uncertain about the hexagon’s vertical movement. At 78°N, these clouds are the result of a hurricane, which spans 30,000 kilometers across and forms a six-sided jet stream cloud-pattern above Saturn’s North Pole. This phenomena is more visible when summer approaches.[9] Using seven of the ISS images to create a movie that followed the hurricane over the course of 5 hours, scientists first calculated the storm’s rotation individually at each latitude and then interpolated the images to determine the speed of the storm at 360 km/h,[10] taking under 11 hours to complete a single rotation. This would explain its lack of movement over the surface of Saturn.[11] What, then, causes the storm clouds hovering over Saturn’s North Pole to persist, and why do the clouds form into an odd hexagonal shape?

Although there is still uncertainty regarding the hexagonal storm clouds on Saturn since their discovery in 1981,[12] scientists have been able to determine why the hexagonal cloud is shaped the way it is and how it functions. Clouds in general are created when warm water vapour reaches the colder air in the sky and goes through condensation. Since Saturn is so far away from the Sun and relatively massive in size, the planet reaches very cold temperatures compared to Earth and maintains the ice particles found in the clouds.[13] Through the use of Cassini’s Visual and Infrared Mapping Spectrometer (VIMS) and their knowledge on the elements found on Saturn surface, scientists were able to detect the size and makeup of particles found in the atmosphere. Due to the cold air in the atmosphere, the clouds form ammonia ice crystals after condensation occurs. [14] Ice crystals are less dense than liquid water droplets due to the orientation of hydrogen bonds so, therefore, the ice clouds are less dense than the lower clouds. As determined by multiple different models to recreate a similar environment to Saturn’s, the shape of the clouds itself is simply formed due to its constant speeding motion whilst winds from around it blow in various directions ultimately influencing the shape into a hexagon.[15] Usually, clouds that are closer to the surface move at lower speeds than clouds at higher levels. This would explain the speed at which the cloud moves and its relation to the location since the hexagon is closer to Saturn’s surface than other clouds. A possible reason for the stationary appearance of the clouds could be due to its formation above the North Pole itself. Since there are winds blowing towards it from different angles giving it its hexagonal shape, they might also just be holding it still in that precise spot.[16] 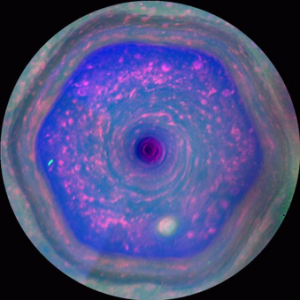 Saturn’s unique hexagonal-shaped cloud storm hovering over its North Pole has been difficult to explain simply due to the fact that scientists lack the ability to do hands-on experimenting, as they are able to conduct on Earth. The storm has been estimated to be moving at a continuous average speed of 360 km/h, which can explain its stationary placement above Saturn’s Pole.[17] With the lack of movement above Saturn’s surface, it is possible the winds blowing at its precise atmospheric level form the six different corners on the cloud.[18] Research has found that the cloud itself rotates at a very similar rate to the planet concluding that it is likely its shape relies on the movement of the planet.[19]

Since the discovery of the hexagonal cloud storm, there have been many experiments done to imitate the cloud structure, one of which was done by the Technical University of Denmark. This specific experiment involved spinning water at such high speeds according to the amount of water in the bucket to create a similar environment as on Saturn. When this was done, results provided that the water would form a whirlpool-effect and create a space in the middle of the bucket while the water was pushed to the sides of the bucket. With multiple different shapes forming due to the instability of the water rotating at such speeds in its controlled environment, the whirlpool eventually formed into the hexagonal shape scientists observed on Saturn.[20] Experiments such as these are the closest we have come to really understanding the shape of this cloud formation but due to the results, it is evident that the shape is highly influenced by the surrounding pressures of winds, location, and ice-crystal structure. 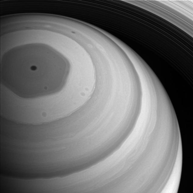 Position of the Clouds

The North Pole plays a significant role regarding Saturn’s unique hexagonal storm clouds. It is significant because the clouds always seem to persist in that particular area and do not seem to travel anywhere else on Saturn. This is a particular topic that scientists do not seem to have figured out yet.[21] Temperature may be part of the reason for the position of the hexagon, as there is also a vortex over the South Pole on Saturn, which is a much warmer area on average compared to the North Pole.[22] Interestingly, however, this vortex in the South Pole is changing. This may be due to the planet’s enormous size, fluctuating temperatures and atmospheric pressures. However, the exact reason is not yet entirely understood.[23] What is odd is that even though the North Pole is much colder than the South Pole, there is a random hot spot (a ring) located in the North Pole. The hot spot was discovered using data discovered from Cassini’s composite infrared spectrometer, and is similar to the hot spot found in the South Pole.[24] This hot spot, mixed with the general cool temperature of the North Pole, may cause a reaction that could play a part in the hexagonal shape.

Another factor that may play a part in the positioning of the hexagon is the fact that the hexagon seems to have had a steady motion over the last fifteen years and the motion seems to be independent from any other events (e.g. the South Pole vortex) occurring in Saturn’s atmosphere.[25] This steady motion of the hexagon seems to keep it positioned over the North Pole. While it is not known if the motion of the hexagon was steady prior to the last fifteen years, it is generally assumed that it likely was since there is lack of observable data to the contrary. An interesting observation was that the hexagon had nearly stationary motion relative to the reference frame (a reference point for which the hexagon was measured against), which was denoted as System III.[26] Although there is not much solid evidence regarding why the hexagon is positioned over the North Pole, there is some good information out there that can help form the foundations for useful theories in the future. A lot of information about Saturn’s hexagonal clouds has come from the Cassini-Huygens space research mission, where a probe was launched into space in the late nineties. The temperature differences between the North and South may be a contributing factor in regards to why this only occurs in the North Pole, and the very steady motion of the hexagon itself can help explain this phenomenon. 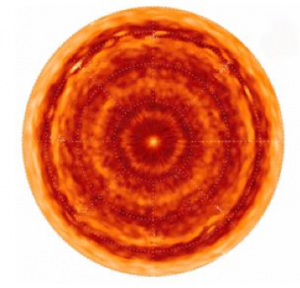 What We Now Know

Saturn’s unique hexagonal clouds span 30,000 kilometers across and form a six-sided jet stream located at 78°N. Scientists have determined that the hexagonal cloud pattern does not move from its horizontal location, but they are uncertain about its vertical movement. It seems that temperature plays an important role in both the shape of the hexagonal cloud pattern and in its position (the mixture of the North Pole’s coolness with the hot spot within it). It has been observed that the hexagonal cloud formation has been maintaining a steady motion for fifteen years now, and that this motion does not appear to be contingent on any other forces on Saturn. This steady motion may explain the enduring position of the hexagon. Learning more about the phenomena of this cloud pattern may provide valuable insight into our own planet and how it may evolve over time. Since the topic of Saturn’s hexagonal cloud formation is still relatively new, we have endeavoured to provide a literature review on the topic whereby a large amount of academically sourced research was summarized.