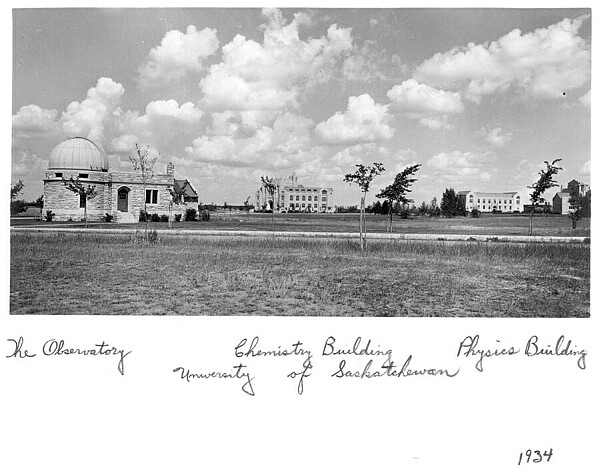 The University of Saskatchewan Observatory in an iconic symbol of the University of Saskatchewan, and a favourite destination of Saskatoon tourists. The Observatory was built between 1928 and 1929, following donations from residents of Saskatoon and Regina, along with further contributions from the university. In total, $3800 was raised through donations from local residents, following an initial donation of $500 by W.H. Duncan of Regina, after whom the Observatory’s 7-inch T. Cooke & Sons refractor telescope was named. Following the telescope purchase in the sum of $4,976.51, the building was constructed in two stages, beginning with the round telescope building in 1928, followed by the classroom and transit room in 1929, at a total cost of $23,000.

Over time, the Observatory has seen many notable changes. In its early days, the Observatory was managed by the Mathematics Department, but in the 1930s care of the facility was assumed by Dr. E.L. Harrington, Head of the Physics Department. In the 1930s and ’40s, Physics students were recruited as caretakers of the facility, stoking the fire to keep the furnace running, which they did in exchange for living quarters in the basement. Following this period, Professor W.H. White took up outreach through the Observatory, opening its doors to the public once-a-week for eighteen years. In 1945, Professor White designed and paid for the original sundial, a replica of which remains mounted on the Observatory’s south exterior wall.

The Observatory saw another resurgence in the late 1960s, with the formation of the Saskatoon Centre, R.A.S.C, who made the Observatory their home base and continued opening the facility to public viewing. Professor J.E. Kennedy and Mr. G.N. Patterson initiated projects such as a renovation of the basement, an overhaul of the Duncan telescope, complete with a new paint job and an assessment of the objective lens by NRC Astrophysics Laboratories in Ottawa, and replacement of the original dome with a motorised Ash dome. In 1984, following his retirement from the Physics Department, Patterson rebuilt the weathered sundial.

In the late 1990s, following several decades of construction in the surrounding fields, and associated light pollution from a growing city that has caused the stars to vanish from the Observatory’s night sky, the Department of Physics & Engineering Physics expanded the Observatory by adding two satellite facilities: the Physics Rooftop Observatory and the Sleaford Observatory, which is jointly used and managed by the Saskatoon Centre, R.A.S.C. While student and 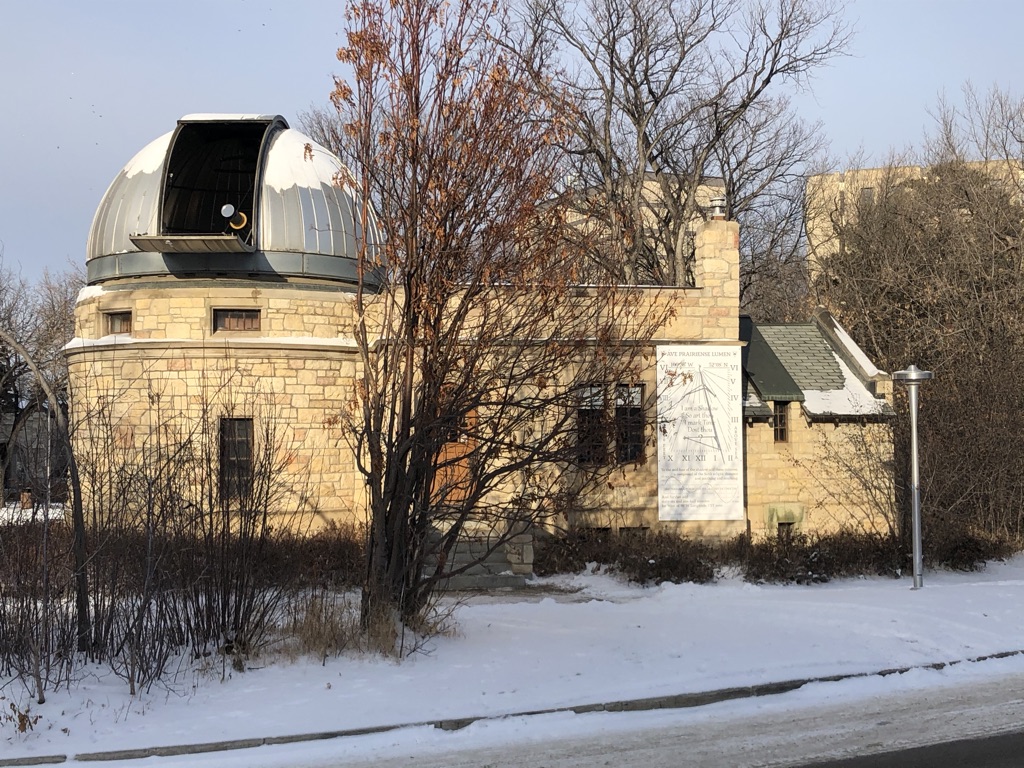 RASC volunteers continue to open the Observatory’s doors on Saturday evenings for public viewing of the Moon and planets, course work is now done using modern telescopes with accurate pointing and tracking abilities, and CCD cameras to measure the light from stars and their spectra. Notably, the 24-inch Tarasoff telescope was constructed at the Physics Rooftop Observatory in 2017-2020 through a generous donation from Karen Larsen, and two fully robotic telescopes were added to the Sleaford Observatory in 2019-2020 through funding from the College of Arts & Science and a collaboration between the U of S Department of Physics & Engineering Physics and the University of North Carolina Chapel Hill. With the addition of the Tarasoff and robotic telescopes, the Observatory is equipped for numerous fascinating projects, from observations of pulsating stars and binary systems, to transiting exoplanets, to the search for optical signals from neutron star collisions.

On this site, you will find stories of a variety of activities associated with the Observatory, from research and astrophotography done by U of S undergraduate students, to stories documenting the the Observatory’s rich history, to public outreach events and programming that we host, often in coordination with the RASC and College of Arts & Science. Please bookmark the site, share stories widely, and stay tuned!