So I’m trying my hand at some “Internet of Farming”, although officially I’m not connected to the net with it just yet. I’m starting small by trying to create a self-watering house plant. I started with a tutorial and code from Ardumotive.com, but had to modify a few things in the code to accommodate the TinkerKit LCD Module/Leonardo Arduino board I wanted to utilize. I built a really simple cedar box for the electronics and as a plant and water jar stand and voila. 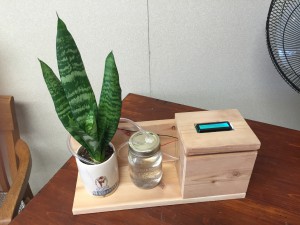 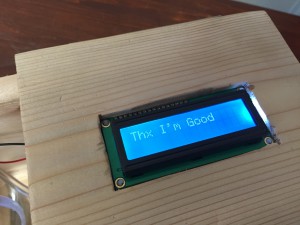 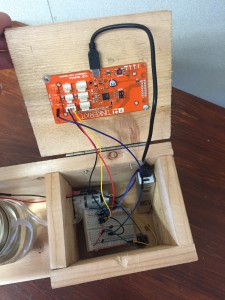 I have had some trouble with the power supplies for this unit however. Fist I was powering the whole thing from a lithium power stick I got at a conference. Worked well enough for powering the Arduino and the moisture sensor, but didn’t have enough umph! to run the motor for the pump. So I added a 9v battery to the motor side of the wiring diagram, but it ran it dry in less than a day. So now I’m trying to adapt an old AC/DC power supply to run it which seems to be working. That said, I’ve decided if I’m going to have the power supply plugged in anyway then I might as well have the arduino running off that too. So that’s where I’m at. Trying to figure how to run 5v to the Arduino through micro usb and get 12v to the motor when the arduino flips the moisture switch.