(This article originally appeared the May 2019 issue of Saskatoon Skies, the RASC Saskatoon Centre monthly newsletter. Reprinted here with permission from the author.)

My connection with the U of S Observatory began in May of 1970.  I was a grade 12 student about to graduate from Aden Bowman Collegiate when one of my teachers approached me about a job possibility over the summer.  It was through the College of Arts & Science at the U of S and it was for a position as Observatory Assistant at the U of S Campus observatory in Saskatoon.  The teacher knew I already was pretty “spaced out” about astronomy so I was encouraged to apply. 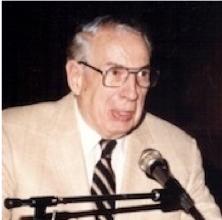 Sometime in June of that year, I met with Prof. Ed Kennedy, assistant dean of the College of Arts & Science.  I do not recall much about the actual interview except that he insisted I register as a student in his Astronomy Class for the fall term which I did.  I was hired and my responsibilities began in July, opening the Observatory for three hours of public viewing on Wednesday evenings.  Later that fall, we added school tours of the building and its telescope.  These were initially offered in conjunction with Wednesday evening Open Houses but as the numbers attending increased, they were changed to Thursday and Friday evenings. 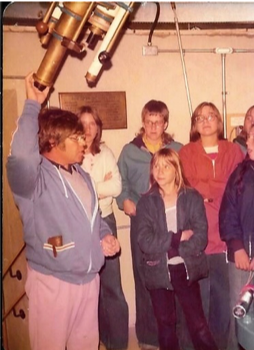 It was not long after beginning there that I met Mr. Wendel Frenzel who was a regular at the observatory and expressed an interest in working alongside me.  Wendel was an amazing individual of German background.  His self-taught knowledge of practical astronomy, command of the English language and ability to relate to people in the building was astounding.  Together we ran the observatory, taking turns working upstairs behind the telescope and downstairs in the classroom, greeting people and explaining astronomical concepts.  I began planning special events at the observatory including special openings for the close approach of mars, planetary configurations, and partial solar eclipses. It rapidly became clear that it was not only helpful but essential to have two people working in the building.  Wendel was soon added to the payroll.  At that time the observatory only had two levels open to the public and the only reason anyone would venture into the basement area was to navigate the narrow and precarious stairs to use the single antiquated washroom facility.

I learned a lot about myself in those early years.  I discovered that I was happiest if not “at my best” when surrounded by crowds of people waiting their turn to view through the telescope.  I seemed oblivious to the outdoor temperatures even when it was -30 degrees Celsius.  The same thing was true of the classroom downstairs.  I truly enjoyed discussing and explaining the wonders of our universe to anyone who was interested in learning. 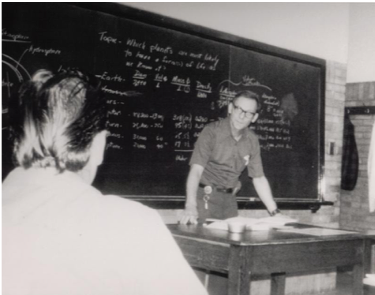 An attendance book kept track of all visitors including monthly meetings of the Saskatoon Centre, RASC which were being held on Monday evenings.  This is where I first met Mr. G.N. Patterson (Gordon).  He was an amateur astronomer and machinist for the Physics Dept. responsible for upkeep of the 7-inch Duncan telescope.

In 1971 under his direction and with help from members of the Centre, the telescope was completely dismantled, moved over to the Physics Building, repainted and reassembled approximately six months later.  There was considerable disagreement between Prof. Kennedy and Gordon Patterson over the repainting of the telescope.  Ed Kennedy, whose expertise was historical astronomy felt strongly that it should be repainted the original color which was a moss or olive green.  Gordon Patterson, on the other hand was doing the work and wanted a fresh new look.  In the end, Gordon won, and the telescope was reassembled in its new blue white and gold tones.  The refurbishing of the telescope made for some tough times, opening the observatory on Wednesday evenings knowing there was no telescope available for viewing. 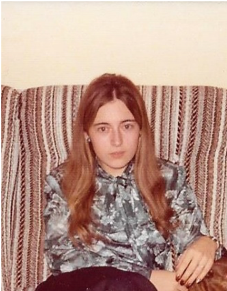 Following the refurbishing of the telescope, attendance at both Wednesday evening open houses and Friday night tours began to grow to the point that it was decided to add another Open House time slot on Sunday afternoons from 2 pm to 5 pm.  (see Appendix A) This proved very popular as many people were on campus on Sundays and looking for places to explore.  It was not uncommon to see a hundred visitors on a Sunday afternoon. In November of 1972, Miss Halyna Kornuta was added as a tour guide so a rotation could be setup among the Open House tour guides.  The practice of opening on Sunday afternoons as well as on Wednesday evenings continued for five years until the end of October of 1977.

In 1974, I began a teaching career with the Saskatoon Public School Division as a middle years teacher with a science specialty.  I enjoyed this and trust me all my students got a healthy dose of astronomy in their science classes.  With these new responsibilities, I still continued to “moonlight” at the Observatory unable to part with this avenue to spread my passion.

In 1975, Prof. Kennedy announced he had managed to procure $30 000 through the Museum Committee to renovate the Observatory building.  The funds would be put first toward replacing the dome which rumour had it was being held together by the layers of paint on its exterior surface.  The remaining funds would be to upgrade the flooring and walls in the building, create two proper washrooms and a darkroom in the basement, as well as proper display cases directly under the dome and in the transit room. 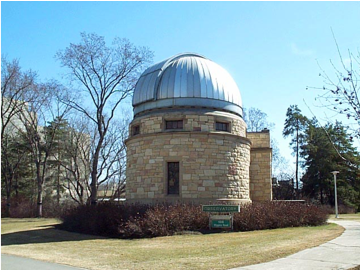 It was an exciting time as we watched the renovations unfold.  In April of 1976, I watched as a crane removed the old dome and lifted the new one purchased from Ash Dome into place.  This new dome was motorized so gone was the effort of using brute arm strength on the rope attached to a pulley system to move the old dome.  That same year renovations began in earnest and by Christmas of that same year were completed.

The newly renovated observatory was a real pleasure to work in.  Walls and ceiling freshly plastered and painted, floors tiled, stairs with proper handrails, two small but proper washrooms and a working phone to answer or record messages coming in and to allow phone calls out.  The displays were thematic and well thought out.  The elements of astronomy downstairs under the circular dome and actual meteorites upstairs in the transit room.  New bulletin boards surrounded the classroom area and it was fun properly hanging large wall charts and astronomical posters.  The overall changes and their effects were stunning.  Sometime in this period we stopped opening on Sunday afternoons and concentrated only on Wednesday evenings and Friday night school tours. 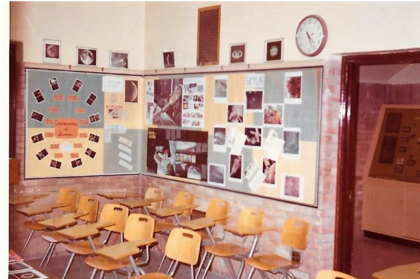 I left teaching and the observatory for a year to pursue a Planetarium Internship at the Manitoba Museum of Man & Nature in Winnipeg.  Upon return I went back to my teaching career in Saskatoon and of course evenings at the Observatory.  I used my planetarium audio production skills to produce an audio slide set entitled “A Visit to the U of S Observatory” starring and narrated by a young grade 6 girl from my classroom at Lester B. Pearson School.  An on-site Inservice for teachers followed and observatory attendance and in-particular school tour numbers continued to grow.

In late October of 1984, I was closing the dome after working a Wednesday evening Open House when tragedy struck.  During the routine procedure of moving the telescope to an inverted position to keep dust off the front lens, I heard something sliding down the tube followed by a loud bang at the objective end.  When I went to inspect before placing the lens cap on the lens, the event and resulting damage was apparent.  A metal tube light baffle attached to the working eyepiece had come loose over the years and had picked this moment to slide the length of the tube and collide with the edge of the objective lens making a chip on its edge the size of a quarter.  I reported it to Gordon Patterson who first thought he could just paint over the spot with a flat black paint but after closer inspection decided the lens was showing enough wear over its 55-year history that it was overdue for replacement.  A replacement seven-inch lens was cost prohibitive as it would have to be custom made but a standard 6 inch would work and likely be as effective in light gathering power as the old 7-inch.  The telescope was once again shut down for a few months while the new lens was ordered and installed.  The telescope returned to service as a 6-inch refractor and it offered some very effective views due to the newness of the front lens.

In the summer of 1985, I ceased working at the Observatory to keep up with the increasing demands of my teaching career and to allow the position of Observatory Assistant to be filled by a registered student at the U of S.  To this day, however, I credit much of my success in life, particularly in the area of astronomy outreach to those wonderful 14 years at the observatory. Even today, when I enter the building, I have that feeling of “coming home”. 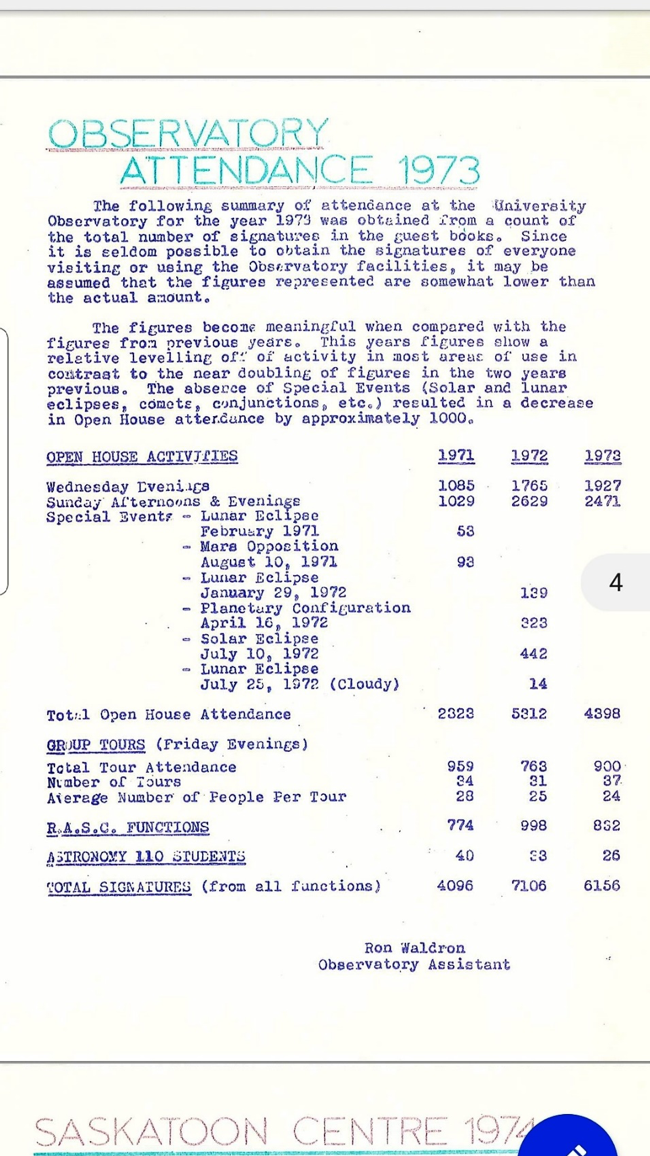