FROM OUR PUBLICATIONS DESK 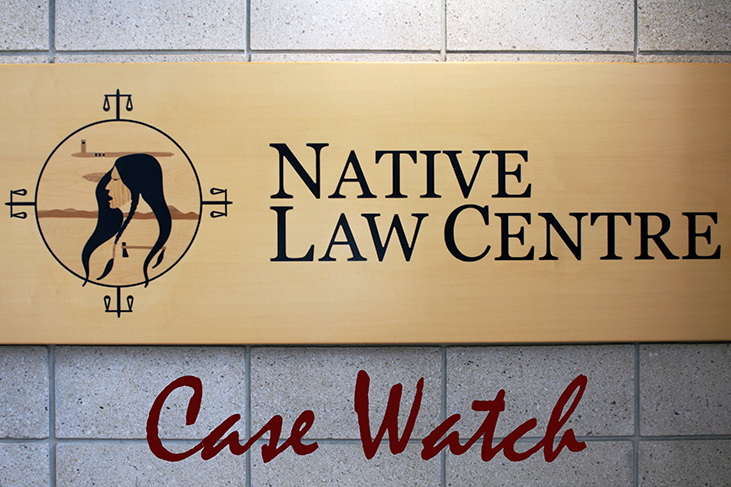 The following decisions came across our desk over the past month:

Uashaunnuat (Innus of Uashat and Mani-utenam) c Iron Ore Company of Canada, 2016 QCCS 5133 (in French only): The Superior Court of Quebec dismissed an application from the defendants to strike portions of the plaintiffs’ claims. The Innu plaintiffs are suing the defendants, a mining company and a railway company, for $900M in damages for alleged harms to their section 35 rights within their traditional territory, the Nitassinan, which covers a large portion of the Quebec-Labrador peninsula. The defendants argued that to the extent the plaintiffs’ claims relate to land outside Quebec’s borders, those claims are outside the jurisdictional competence of the Quebec Superior Court, as per the Quebec Civil Code. The claims are premised on asserted Aboriginal rights and title, as well as treaty rights. In determining this application, the Court noted the need to consider the Aboriginal perspective when addressing section 35 rights, the sui generis nature of these rights, and the fact that recognition of these rights is ancillary to the primary focus of this litigation, which is on damages. The Court also rejected forum non conveniens and Crown immunity arguments. It noted in the latter case that the section 35 rights of the Innu are existing rights, not rights created by the courts, and should therefore not differ as between Quebec and Labrador.

Freedom of expression in context to injunction application for blockade –

Siksika Nation v Crowchief, 2016 ABQB 596: The Alberta Court of Queen’s Bench granted the Siksika Nation an interlocutory injunction against a group of its members to prevent them from interfering with its contractor’s efforts to rebuild homes in an on reserve development. The respondent stated that his purpose for initiating the blockade was to draw attention to alleged issues of oversight, accountability and transparency with respect to the applicant’s use of financial resources on this project, among other things. The respondent invoked his Charter right to freedom of expression in defence of the protest and blockade. The Court found that the applicant was able to meet the test for an interlocutory injunction. The Court also held that the Charter did not apply in the circumstances, since the injunction was aimed at ensuring the applicant and its contractor could fulfill the terms of a private agreement, and the applicant was not seeking to prevent the respondents from pursuing legal avenues to express their dissent. The Court further concluded that the injunction would be a justifiable infringement of the respondents’ Charter rights even if the Charter had applied.

Annuity claims and the unique context of each Numbered Treaty –

Horseman v Canada, 2016 FCA 238: The Federal Court of Appeal dismissed an appeal from a Federal Court decision that declined to certify a proposed class proceeding for treaty annuities owed under each of the Numbered Treaties. The Federal Court had concluded that there was insufficient commonality between the circumstances of each treaty’s annuity clause for the purposes of a class action. The Court of Appeal upheld the decision and substantially agreed with the Federal Court’s analysis. It held that treaty interpretation requires an intensive inquiry into the mutual intent of the parties and the purposes for which they entered treaty. Due to the unique historical, cultural, and economic context surrounding each treaty, class proceedings would likely not have issues of commonality unless they were limited to a particular Numbered Treaty.

Admission of extrinsic evidence re: duty to consult on judicial review –

Sipekne’katik v Nova Scotia (Minister of Environment), 2016 NSSC 260: The Supreme Court of Nova Scotia allowed the admission of affidavit evidence beyond the record in a statutory appeal from ministerial approvals under Nova Scotia’s Environment Act. The approvals were for the development of an underground natural gas storage facility. Sipekne’katik claim Aboriginal and treaty rights to hunt and fish in the area where the project will be developed. The Court held that evidence beyond the record would only be admissible in exceptional circumstances, such as breaches of natural justice and procedural fairness. All parties relied on the Crown’s duty to consult falling within the broad heading of a “breach of procedural fairness” in order to argue that their respective affidavits were admissible. The Court noted that affidavit evidence would not be admissible merely because the honour of the Crown was raised as an issue. They must relate to the scope and content of the duty to consult and whether that duty has been fulfilled. Under this test the Court accepted all the affidavits, subject to the striking of some argumentative portions.

D.N.T. Contracting Ltd v Abraham, 2016 BCSC 1917: The Supreme Court of British Columbia granted a logging company’s application for an injunction prohibiting members of the Takla Lake First Nation (TLFN) from blocking, physically impeding, or delaying access to harvesting sites under a timber licence. Members of the TLFN stated that their burial sites and traditional territory were within the cut block boundaries of the licence. They also stated that TLFN receives a larger number of consultation referrals than they can manage due to their small size and financial management issues from previous administrators. TLFN indicated it was willing to negotiate with the applicant and allow the logging if accommodation could be reached. The Court held that the blockade constituted irreparable harm as further delays would threaten the economic standing of the company’s operations and harm it significantly. The Court held that TLFN should have brought its issues forward during the consultation process before the licences were approved, rather than threatening the administration of justice by blocking access to the harvesting sites long after the time for consultation had passed.

Appraisal of lease rates for on reserve recreational properties –

Schnurr v Canada, 2016 FC 1079: The Federal Court resolved three common issues in a class action lawsuit filed by a group of on reserve cottagers. The plaintiffs are disputing a rental increase proposal of up to 700% for each year of a five-year rental term. The primary issue was the appropriate methodology for determining the fair market rental value of the leased properties. The Court determined that the appropriate method was to consider comparable lease rates on comparable property. The Court sided with the plaintiffs’ real estate appraiser because of his greater knowledge of the subject property, and familiarity with the Saskatchewan market and the recreational lands in the province. It did not accept the argument that provincial park rates should be excluded from the calculation due to policy constraints on those rates.

Blackjack v Yukon (Chief Coroner), 2016 YKSC 53: The Yukon Supreme Court dismissed an application to strike the Little Salmon Carmarks First Nation (LSCFN) from an application for judicial review on the basis that it had no standing. Theresa Blackjack and LSCFN jointly filed a petition for judicial review of the Chief Coroner’s decision to close an investigation into the death of Theresa’s daughter, Cynthia Blackjack, without ordering an inquest. The Chief Coroner asserted that LSCFN had no standing in relation to the subject matter of the petition. The Court concluded that LSCFN had public interest standing to proceed with the petition because LSCFN raised a serious justiciable issue, had a real stake or genuine interest in that issue, and the proposed suit was a reasonable and effective way to bring the issue before the courts.

Limitations period for negligence claim based on sexual assault:

Fox v Narine, 2016 ONSC 6499: The Ontario Superior Court of Justice dismissed an application to strike a statement of claim alleging that a shelter was negligently operated when the late plaintiff was sexually assaulted there. The plaintiff was subsequently murdered. The Court held that there was a sufficiently proximate relationship between the late plaintiff and the shelter where she was staying at the time of her assault. There was also no reason to override or limit the scope of the duty of care. The statutory provision that would allow this action to proceed was created to improve the protection that the law offers to victims of sexual violence. While a limitation period under the Trustee Act, 2002 would ordinarily have barred the claim from being brought more than two years after the plaintiff was killed, there is no limitation period under the Limitations Act, 2002 where an action is based on sexual assault. The more general statute must yield to the more specific one, which was the limitations legislation in this case.

Canada not estopped from estoppel argument in Treaty 8 tax litigation –

Tuccaro v Canada, 2016 FCA 259: The Federal Court of Appeal dismissed an appeal from an interlocutory order of the Tax Court of Canada. Mr. Tuccaro unsuccessfully sought to strike portions of Canada’s reply where it was asserted that he was estopped from asserting a treaty right to tax exemption under Treaty 8. Mr. Tuccaro argued that this issue was definitively addressed in a past Federal Court of Appeal decision in this litigation with respect to an appeal from another motion to strike, and Canada was therefore estopped from raising its estoppel argument. Both the Tax Court and the Federal Court of Appeal disagreed. The Court of Appeal did not find it plain and obvious that Canada would be estopped from raising its estoppel argument, especially considering the discretion that a trial judge maintains over whether it accepts such an argument. The Court of Appeal also suggested that Mr. Tuccaro’s argument could have grave consequences if it were accepted. It could force litigants to raise grounds that they know have no chance of meeting the stringent test for motions to strike in order to avoid potential issue estoppel arguments on those unpleaded grounds.

Duty to reference Gladue factors in reasons for sentence –

R v Wheatley, 2016 BCCA 397: The British Columbia Court of Appeal allowed an appeal from a sentence of 18 months imprisonment for breach of a residency requirement in a long-term supervision order. The sentencing judge made no mention at all of Mr. Wheatley’s Aboriginal background or his traumatic upbringing, although this was established during the sentencing hearing and the subject of submissions. The judge was clearly aware of the law, having been the sentencing judge for one of the sentences on appeal in the Supreme Court’s Ipeelee decision. However, the importance of Mr. Wheatley’s Aboriginal background and the traumas he suffered growing up appear to have been “lost in the shuffle” when it came to the imposition of a sentence. The Court of Appeal held that “[t]oday, reference to an Aboriginal offender’s circumstances should be seen as mandatory”. The sentencing judge erred in failing to particularly consider Mr. Wheatley’s Aboriginal circumstances and Gladue factors, resulting in an unfit sentence.

R v Daybutch, 2016 ONCJ 595: The Ontario Court of Justice ordered a curative discharge for Ms. Daybutch with respect to her convictions for impaired driving offences, finding it to be both appropriate for the defendant and in the public interest. Earlier in these proceedings the Court had concluded that Ontario was in violation of the s 15 equality rights of Indigenous people in Ontario by failing to request the proclamation into force of a curative discharge option for impaired driving offences. This decision on sentence adopted a remedial approach under s 24(1) of the Charter. The Court had before it a Gladue report on Ms. Daybutch that indicated how her offences related to the systemic and background factors she faced as an Aboriginal woman. The Court took the view that the use of a curative discharge where warranted for Aboriginal offenders would permit sentencing judges to act in a Charter-compliant manner in accordance with the Supreme Court’s directions in Gladue and Ipeelee.