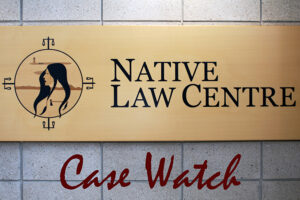 A claimant should not be barred from seeking leave of the court to pursue a s. 35 claim because his claim engages collective Aboriginal rights or incidentally engages questions of self-government.

In Beaver, Lauwers J.A. reversed the motion judge’s ruling, which dismissed Mr. Hill’s claim under s. 35 of the Constitution Act,1982. In his claim, Mr. Hill sought to challenge the applicability of the Children’s Law Reform Act, R.S.O. 1990, c. C.12 and Family Law Act, R.S.O. 1990 c. F.3, on the basis that he had a right to resolve support obligations under the Indigenous family dispute laws of the Haudenosaunee. The motion judge barred Mr. Hill from pursuing his claim on grounds of standing and justiciability. Regarding standing, the lower court pointed to the uncertainty in the law regarding an individual’s ability to personally pursue Aboriginal rights. Regarding justiciability, the motions judge cited Delgamuuk for the proposition that courts cannot adjudicate on claims involving broadly framed rights of self-governance.

In reversing this ruling, Lauwers J.A. pointed to various governing principles established in the case law. Among these was the principle that the basic purpose of s. 35 articulated in Van der Peet, Delgamuukw and Haida Nation, is to pursue reconciliation of the pre-existence of Aboriginal societies with the sovereignty of the Crown. Secondly, citing Behn, Lauwers J.A. emphasizes that in matters engaging Aboriginal treaty claims, a full hearing that is fair to all stakeholders is essential. Thirdly, he restates Binnie J’s caution in Lax Kw’alaams Indian Band that judges should avoid making definitive pronouncements regarding s. 35 at these early stages in the jurisprudence. He further adds that the reconciliation of individual and collective aspects of Aboriginal and treaty rights is an unresolved issue. Citing Behn, Lauwers J.A. notes that the Supreme Court “resisted the invitation of intervenors to classify or categorize [A]boriginal or treaty rights into those that are exclusively collective, those that are predominantly individual and those that are mixed.”

Applying these principles, Lauwers J.A. concludes that Mr. Hill’s claims are not exclusively claims to self-government. Instead, he seeks a right to have his support obligation determined by the Indigenous family system, which isn’t itself a claim to self-government. Moreover, while Mr. Hill’s claim may affect other Haudenosaunee people, this is simply the nature of constitutional litigation. Mr. Hill does not make claims for the Haudenosaunee peoples as a group. Lauwers J.A. continues to clarify that while this decision would enable separate spheres of jurisdiction (i.e. the provincial family law system and the Indigenous family law system) this is in keeping with the vision of s.35 as a tool for reconciliation.

By Daniel Quainoo and Benjamin Ralston

In Mikisew Cree the Supreme Court of Canada considered the question of whether the Crown’s duty to consult and accommodate Aboriginal peoples extends to the legislative process. Mikisew Cree First Nation sought a declaration acknowledging the role of ministers in developing policy for the formulation of legislation as “Crown conduct” that triggers the Crown’s duty to consult and accommodate. The Court also addressed whether s.18 of the Federal Courts Act provides the Federal Court with jurisdiction to review matters engaging the law-making process and whether enabling courts to review legislative processes would be in keeping with Canada’s constitutional order. While the Court was unanimous in deciding that the Federal Court lacked the jurisdiction to consider the question under s.18 of the Federal Courts Act, it was divided as to whether an executive actor could be said to have a duty to consult while participating in the legislative process and why.

Karakatsanis J, writing the judgment for herself, Wagner CJ and Gascon J, held that the duty to consult cannot apply to the law-making process as this would contradict the constitutional principles of the separation of powers, parliamentary sovereignty and parliamentary privilege. She added that as a matter of pragmatism, imposing a duty to consult on the policy development stage of the legislative process could limit the possibility of meaningful accommodation since a proposed bill can be freely amended once introduced into Parliament. It would also lead to incongruous treatment of private member bills that do not involve any comparable Crown conduct to trigger the duty. Karakatsanis J concluded that the duty to consult doctrine is ill-suited to be applied directly to the law-making process.

At the same time, Karakatsanis J held that the constitutional principle of the honour of the Crown applies to the law-making process and that it would undermine the endeavour of reconciliation to allow the Crown to use legislation to circumvent its duty to consult and accommodate Aboriginal peoples. She pointed out the Ross River decision of the Yukon Court of Appeal where it was stated that legislation will be unconstitutional to the extent that it prevents meaningful consultation and accommodation from occurring. Karakatsanis J left open the possibility of other remedies for breaches of the honour of the Crown in the legislative context and suggested that the extent of any consultation may be a relevant consideration to other forms of recourse.

Brown J affirmed the conclusion that the constitutional principles of the separation of powers and parliamentary privilege prevent the judiciary from applying the duty to consult to the law-making process. He also opined that Crown conduct necessarily excludes parliamentary functions of the state and thus these functions cannot be subject to a duty to consult. Finally, he indicated that by leaving open the possibility that there may be other doctrines developed to enable review of the legislative process, even in the absence of a successful claim that Aboriginal or treaty rights have been unjustifiably infringed, the judgment written by Karakatsanis J undermines the conclusion that constitutional powers prevent judicial review of the legislative process. He stated that this position leaves the law in a state of considerable uncertainty and invites Aboriginal peoples to return to the courts to identify what “other form of recourse” might be available as an alternative to the duty to consult in the legislative context.

Writing for himself along with Moldaver and Cote JJ, Rowe J affirmed the arguments articulated by Brown J, and elaborated on three further points. First, he indicated that Aboriginal claimants continue to have remedies pursuant to the Sparrow, Haida and Rio Tinto decisions once legislation is enacted. Second, he outlined how the recognition of the duty to consult in the legislative process could be disruptive to the legislative process and pointed to numerous questions that are raised by imposing a duty of consultation on legislatures. Finally, he argued that providing the Mikisew Cree with the declaration they sought would demand that courts become interventionist in a manner that is not in keeping with the principle of separation of powers.

Abella and Martin JJ articulated a different vision for the judicial review of the legislative process. Writing for both Martin J and herself, Abella J held that any consideration of the duty to consult must begin with the Honour of the Crown and the overriding goal of reconciliation. In that light, she stated that the Court must reconcile the need to protect the legislative process from judicial interference with the need to protect Aboriginal rights within the legislative process. Abella J acknowledged that recognizing the honour of the Crown and duty to consult in this context may impact the legislative process, but held that the need for adjustments could not justify the erasure of constitutionally mandated rights. She noted that section 35 was recognized as a constitutional limit on the exercise of parliamentary sovereignty in the Sparrow decision and objected to parliamentary sovereignty now being used as a shield to prevent a claim for consultation. Abella J’s reasons highlight the essential role that the honour of the Crown and the duty to consult play in reconciling Aboriginal and Crown sovereignty. Abella and Martin JJ reasoned that the courts ought to play a role in evaluating whether legislative processes are in keeping with the special relationship between Indigenous peoples and the Crown.

The full reasons of the Supreme Court of Canada can be found here and a short summary is provided here.