Canada’s flooding crisis is spilling over our shores. Only urgent action can dam the breach

Amidst all its other woes, the city was lashed recently by an extreme rain and hailstorm that closed Deerfoot Trail, destroyed scores of homes and flooded streets. Fire crews had to rescue stranded motorists from the highways by boat. Estimates of the financial costs go as high as $1-billion.

Calgary’s plight has been endured by many other Canadian cities. Only six weeks earlier, warming temperatures and rapid snowmelt resulted in ice jams in northern Alberta, which caused record-high flooding on the Athabasca River in Fort McMurray; more than 14,000 Albertans had to flee their homes. Premier Jason Kenney put it well when he said that “the devastation caused by the flooding … has impacted thousands of lives, washing away memories and losing the security of your home.”

And Alberta is not alone among provinces hit by extreme flooding while trying to cope with a pandemic. The story is the same in southern Manitoba and Saskatchewan, where local municipalities have declared states of emergency to evacuate residents from the rising Roseau River.”

Alberta wrestles with its most critical resource: water
The Narwhal, June 18, 2020
Sarah Lawryniuk

“A severe thunderstorm in Calgary in mid-June delivered a salvo of hail that shattered windshields and stripped siding off houses. The accompanying rain flooded streets to the point of closure — though not before submerging dozens of cars.

In a press conference on June 15, Mayor Naheed Nenshi said the magnitude of damages within the city exceeds even those of 2013, when the Bow River swelled to precipitate the largest flood Calgary had seen since 1932.

“Over the last 15 years, Alberta has had the most severe environmental disasters associated with water of any part of Canada,” says John Pomeroy, director of the Global Water Futures program, which is based at the University of Saskatchewan.”

Featuring The Honourable Ralph Goodale, this workshop will build on the discussion that began with the National Water Policy Panel on May 13th by diving deeper into priority water issues as they relate to agriculture. The workshop will include the latest scientific advances from GWF projects, science-to-policy discussions with ag-water leaders, and opportunities for participants from diverse agricultural sectors to offer perspectives and identify science synergies and policy implementation.

Abstract
Vegetation has a tremendous influence on snow processes and snowpack dynamics, yet remote sensing techniques to resolve the spatial variability of sub-canopy snow depth are not always available and are difficult from space-based platforms. Unmanned aerial vehicles (UAVs) have had recent widespread application to capture high-resolution information on snow processes and are herein applied to the sub-canopy snow depth challenge. Previous demonstrations of snow depth mapping with UAV structure from motion (SfM) and airborne lidar have focussed on non-vegetated surfaces or reported large errors in the presence of vegetation. In contrast, UAV-lidar systems have high-density point clouds and measure returns from a wide range of scan angles, increasing the likelihood of successfully sensing the sub-canopy snow depth. The effectiveness of UAV lidar and UAV SfM in mapping snow depth in both open and forested terrain was tested in a 2019 field campaign at the Canadian Rockies Hydrological Observatory, Alberta, and at Canadian prairie sites near Saskatoon, Saskatchewan, Canada. Only UAV lidar could successfully measure the sub-canopy snow surface with reliable sub-canopy point coverage and consistent error metrics (root mean square error (RMSE) <0.17 m and bias −0.03 to −0.13 m). Relative to UAV lidar, UAV SfM did not consistently sense the sub-canopy snow surface, the interpolation needed to account for point cloud gaps introduced interpolation artefacts, and error metrics demonstrated relatively large variability (RMSE<0.33 m and bias 0.08 to −0.14 m). With the demonstration of sub-canopy snow depth mapping capabilities, a number of early applications are presented to showcase the ability of UAV lidar to effectively quantify the many multiscale snow processes defining snowpack dynamics in mountain and prairie environments.

For the full article, go here. 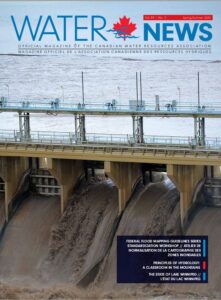 Principles of Hydrology: A Classroom in the Mountains

The second part of the Global Water Futures webinar (see the first show here) will feature two of the titans of contemporary climate science research in the world.

Dr. Trevor Davies, the force behind the creation of the Tyndall Climate Research Centre at the University of East Anglia in Britain, the first dedicated climate research unit in the world, and the scientist who also led the careful and thoughtful response of the global climate community to the Climategate crises that derailed climate action at the failed IPCC climate conference in Copenhagen in 2009, will discuss the history of sabotage of climate science.

Dr. John Pomeroy, who currently directs the largest water and water-related climate research program in the world, will then discuss how the world can transcend the mistakes of the past to ensure the scientific findings generated by leading edge contemporary research can inform evidence-based policy decisions in the future, not just in Canada but around the world.

This session will be moderated by award-winning author Bob Sandford, senior advisor on water policy and as the 20-year Chair of Water and Climate Security at the United Nations University Institute for Water, Environment and Health.

Abstract
Climate change is anticipated to impact the hydrology of the Saskatchewan River, which originates in the Canadian Rockies mountain range. To better understand the climate change impacts in the mountain headwaters of this basin, a physically based hydrological model was developed for this basin using the Cold Regions Hydrological Modelling platform (CRHM) for Marmot Creek Research Basin (∼9.4 km2), located in the Front Ranges of the Canadian Rockies. Marmot Creek is composed of ecozones ranging from montane forests to alpine tundra and alpine exposed rock and includes both large and small clearcuts. The model included blowing and intercepted snow redistribution, sublimation, energy-balance snowmelt, slope and canopy effects on melt, Penman–Monteith evapotranspiration, infiltration to frozen and unfrozen soils, hillslope hydrology, streamflow routing, and groundwater components and was parameterised without calibration from streamflow. Near-surface outputs from the 4 km Weather Research and Forecasting (WRF) model were bias-corrected using the quantile delta mapping method with respect to meteorological data from five stations located from low-elevation montane forests to alpine ridgetops and running over October 2005–September 2013. The bias-corrected WRF outputs during a current period (2005–2013) and a future pseudo global warming period (PGW, 2091–2099) were used to drive model simulations to assess changes in Marmot Creek’s hydrology. Under a “business-as-usual” forcing scenario, Representative Concentration Pathway 8.5 (RCP8.5) in PGW, the basin will warm up by 4.7 ∘C and receive 16 % more precipitation, which will lead to a 40 mm decline in seasonal peak snowpack, 84 mm decrease in snowmelt volume, 0.2 mm d−1 slower melt rate, and 49 d shorter snow-cover duration. The alpine snow season will be shortened by almost 1.5 months, but at some lower elevations there will be large decreases in peak snowpack (∼45 %) in addition to a shorter snow season. Declines in the peak snowpack will be much greater in clearcuts than under mature forest canopies. In alpine and treeline ecozones, blowing snow transport and sublimation will be suppressed by higher-threshold wind speeds for transport, in forest ecozones, sublimation losses from intercepted snow will decrease due to faster unloading and drip, and throughout the basin, evapotranspiration will increase due to a longer snow-free season and more rainfall. Runoff will begin earlier in all ecozones, but, as a result of variability in surface and subsurface hydrology, forested and alpine ecozones will generate the greatest runoff volumetric increases, ranging from 12 % to 25 %, whereas the treeline ecozone will have a small (2 %) decrease in runoff volume due to decreased melt volumes from smaller snowdrifts. The shift in timing in streamflow will be notable, with 236 % higher flows in spring months and 12 % lower flows in summer and 13 % higher flows in early fall. Overall, Marmot Creek’s annual streamflow discharge will increase by 18 % with PGW, without a change in its streamflow generation efficiency, despite its basin shifting from primarily snowmelt runoff towards rainfall-dominated runoff generation.

For the full article, go here.