A new study finds that ice is disappearing around the globe at an alarming rate and glaciers represent a significant amount of ice loss. Researchers in Canada say the retreat of glaciers will have major impacts on water security in Canada.

Scientific and Human Errors in a Snow Model Intercomparison

Abstract
Twenty-seven models participated in the Earth System Model–Snow Model Intercomparison Project (ESM-SnowMIP), the most data-rich MIP dedicated to snow modeling. Our findings do not support the hypothesis advanced by previous snow MIPs: evaluating models against more variables and providing evaluation datasets extended temporally and spatially does not facilitate identification of key new processes requiring improvement to model snow mass and energy budgets, even at point scales. In fact, the same modeling issues identified by previous snow MIPs arose: albedo is a major source of uncertainty, surface exchange parameterizations are problematic, and individual model performance is inconsistent. This lack of progress is attributed partly to the large number of human errors that led to anomalous model behavior and to numerous resubmissions. It is unclear how widespread such errors are in our field and others; dedicated time and resources will be needed to tackle this issue to prevent highly sophisticated models and their research outputs from being vulnerable because of avoidable human mistakes. The design of and the data available to successive snow MIPs were also questioned. Evaluation of models against bulk snow properties was found to be sufficient for some but inappropriate for more complex snow models whose skills at simulating internal snow properties remained untested. Discussions between the authors of this paper on the purpose of MIPs revealed varied, and sometimes contradictory, motivations behind their participation. These findings started a collaborative effort to adapt future snow MIPs to respond to the diverse needs of the community.

Abstract:
The 30-year simulations of seasonal snow cover in 22 physically based models driven with bias-corrected meteorological reanalyses are examined at four sites with long records of snow observations. Annual snow cover durations differ widely between models, but interannual variations are strongly correlated because of the common driving data. No significant trends are observed in starting dates for seasonal snow cover, but there are significant trends towards snow cover ending earlier at two of the sites in observations and most of the models. A simplified model with just two parameters controlling solar radiation and sensible heat contributions to snowmelt spans the ranges of snow cover durations and trends. This model predicts that sites where snow persists beyond annual peaks in solar radiation and air temperature will experience rapid decreases in snow cover duration with warming as snow begins to melt earlier and at times of year with more energy available for melting.

It may seem unfathomable, but these masses of ice are melting at an alarming rate. Canadian glaciers have shrunk 15 per cent since 1985, and estimated glacier loss in the Rockies could rise to 100 per cent by the end of the century, according to University of Saskatchewan (USask) hydrology PhD candidate Caroline Aubry-Wake.

One of the areas that Aubry-Wake conducts research at is the Peyto Glacier in Banff National Park and the Athabasca Glacier in Jasper National Park. It’s an area that’s a cause for alarm—not just the immediate region, but also those areas downstream—and a look at the region’s rapid ice loss makes this clear. 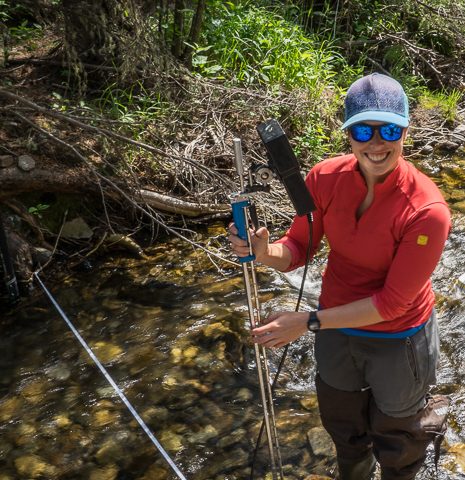 Read the full article at: https://news.usask.ca/articles/research/2021/what-canadas-melting-glaciers-tell-usask-researchers.php