As of April 30, Agriculture Canada said 99 per cent of Saskatchewan’s farmland was “abnormally dry” or worse

Climate Crisis: Elephants in the Room are Getting Nastier

The year 2020 will forever be notorious for the COVID-19 pandemic but it might also be known by historians for a precipitous rise in second order climate change consequences — a new elephant in the room.

Familiar first order consequences, as documented in the World Meteorological Organization’s most recent State of the Global Climate report in April (at https://bit.ly/3eyrPwU), were the ongoing temperature rise over land and sea, melting sea ice and glaciers, higher sea levels, and changes in precipitation patterns.

Also in 2020, continuing a decade-long trend: widespread drought, heat waves, wildfires, cyclones, and flooding, especially in Africa and Asia but also in South America and the United States.

All these led to the second order consequences: Greater food insecurity and an accelerated explosion in involuntary human migration and displacement worldwide.

Abstract
East of the Continental Divide in the cold interior of Western Canada, the Mackenzie and Nelson River basins have some of the world’s most extreme and variable climates, and the warming climate is changing the landscape, vegetation, cryosphere, and hydrology. Available data consist of streamflow records from a large number (395) of natural (unmanaged) gauged basins, where flow may be perennial or temporary, collected either year-round or during only the warm season, for a different series of years between 1910 and 2012. An annual warm-season time window where observations were available across all stations was used to classify (1) streamflow regime and (2) seasonal trend patterns. Streamflow trends were compared to changes in satellite Normalized Difference Indices.

Clustering using dynamic time warping, which overcomes differences in streamflow timing due to latitude or elevation, identified 12 regime types. Streamflow regime types exhibit a strong connection to location; there is a strong distinction between mountains and plains and associated with ecozones. Clustering of seasonal trends resulted in six trend patterns that also follow a distinct spatial organization. The trend patterns include one with decreasing streamflow, four with different patterns of increasing streamflow, and one without structure. The spatial patterns of trends in mean, minimum, and maximum of Normalized Difference Indices of water and snow (NDWI and NDSI) were similar to each other but different from Normalized Difference Index of vegetation (NDVI) trends. Regime types, trend patterns, and satellite indices trends each showed spatially coherent patterns separating the Canadian Rockies and other mountain ranges in the west from the poorly defined drainage basins in the east and north. Three specific areas of change were identified: (i) in the mountains and cold taiga-covered subarctic, streamflow and greenness were increasing while wetness and snowcover were decreasing, (ii) in the forested Boreal Plains, particularly in the mountainous west, streamflows and greenness were decreasing but wetness and snowcover were not changing, and (iii) in the semi-arid to sub-humid agricultural Prairies, three patterns of increasing streamflow and an increase in the wetness index were observed. The largest changes in streamflow occurred in the eastern Canadian Prairies.

Abstract
Hydrological processes in mountain headwater basins are changing as climate and vegetation change. Interactions between hydrological processes and subalpine forest ecological function are important to mountain water supplies due to their control on evapotranspiration (ET). Improved understanding of the sensitivity of these interactions to seasonal and interannual changes in snowmelt and summer rainfall is needed as these interactions can impact forest growth, succession, health, and susceptibility to wildfire. To better understand this sensitivity, this research examined ET for a sub-alpine forest in the Canadian Rockies over two contrasting growing seasons and quantified the contribution of transpiration (T) from the younger tree population to overall stand ET. The younger population was focused on to permit examination of trees that have grown under the effect of recent climate change and will contribute to treeline migration, and subalpine forest densification and succession. Research sites were located at Fortress Mountain Research Basin, Kananaskis, Alberta, where the subalpine forest examined is composed of Abies lasiocarpa (Subalpine fir) and Picea engelmannii (Engelmann spruce). Seasonal changes in water availability from snowmelt, precipitation, soil moisture reserves yielded stark differences in T and ET between 2016 and 2017. ET was higher in the drier year (2017), which had late snowmelt and lower summer rainfall than in the wetter year (2016) that had lower snowmelt and a rainy summer, highlighting the importance of spring snowmelt recharge of soil moisture. However, stand T of the younger trees (73% of forest population) was greater (64 mm) in 2016 (275 mm summer rainfall) than 2017 (39 mm T, 147 mm summer rainfall), and appears to be sensitive to soil moisture decreases in fall, which are largely a function of summer period rainfall. Relationships between subalpine forest water use and different growing season and antecedent (snowmelt period) hydrological conditions clarify the interactions between forest water use and alpine hydrology, which can lead to better anticipation of the hydrological response of subalpine forest-dominated basins to climate variability and change.

Snowpack isn’t a predictor for floods, but it is a factor and it is above average in the headwaters of the Bow River basin this year.

Read the full article and watch the video here.

The Canadian Geophysical Union is accepting abstracts for its planned online series of summer research seminars.  Centre for Hydrology researchers, Chris Marsh, Phillip Harder, and Vincent Vionnet will be convening the following session:

Session 9 – Observation and modelling of snow processes: New advances in an era of big data, UAVs, and high-performance computing

Session Description:
Seasonal snowpacks store substantial volumes of water and their melt provides fresh water supplies to downstream users and ecosystems. Globally, they are estimated to provide essential flows for about one-sixth of the world’s population. Ongoing anthropogenic climate and land use change are dramatically impacting the snowpacks driving these critical flows. There is therefore significant incentive to provide better estimates of these snowpacks and their physical processes through improved observations, analysis, and modelling.

Innovations in modelling, analysis, and observations have expanded predictive and observation capacity in unprecedented ways. Tremendous advances in all types of remote sensing platforms have expanded observation capabilities. For example, the rapid democratisation of remote sensing technology via UAVs have allowed individual researchers the capabilities to observe particular snow processes at unprecedented spatial and temporal resolutions. Broad access to high performance computing resources through academic institutions and commercial vendors have enabled increased resolution, larger spatial and temporal coverage of numerical models, and improved representation of physical processes. The creation of massive datasets constitutes a challenge for the snow community and requires new developments to generate substantial scientific advances in the coming years.

In this session we invite contributions from the broader snow science community who are interested in observations, analysis, and/or models to share their experiences, insights, and new advances in utilizing these next-generation tools. Canada boasts impressive, but at times disconnected, snow science capabilities and we envision this session to be a forum to highlight and discuss areas of recent progress and collective gaps.

For more information and to submit an abstract, go to: https://meeting2021.cgu-ugc.ca/session-9/

CBC News and Dr. John Pomeroy address the drought and fire conditions in Southern Saskatchewan that have farmers and fire chiefs hoping for rain in an article here.

“In 2018, Cape Town was steadily inching toward Day Zero. Three years of punishing drought had reduced the city’s rain-fed reservoirs to just 17 percent capacity. It seemed possible that the South African metropolis might become the first major city in the world to run out of water. Luckily, disaster was narrowly averted when rain arrived in the fall of 2018 and restored the water supply.

But scientists warn that, as the planet continues to warm and extreme weather events become more common, scenarios similar to what transpired in Cape Town will surface in other parts of the world. Even Canada is not immune to this threat. In fact, some places in Canada have already had to cope with water shortages….” 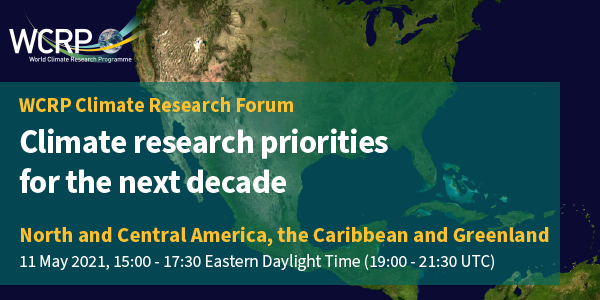 The World Climate Research Programme (WCRP) local organizing committee for the North and Central America, Caribbean and Greenland region, warmly invite you to the upcoming WCRP Climate Research Forum on “Climate research priorities for the next decade.”

This Forum will begin with an overview of WCRP from the Chair and Vice Chair of the WCRP Joint Scientific Committee (the scientific steering body of WCRP), Detlef Stammer and Helen Cleugh, followed by three invited talks on:

This will be followed by a moderated discussion session that will include short presentations on:

This is the third in a series of online Climate Research Forums, aimed at exchanging ideas, discussing new activities and opportunities being developed by WCRP, and exploring ways that our climate science community of scientists, partner programs, funders, and end-users can engage towards building “a world that uses sound, relevant, and timely climate science to ensure a more resilient present and sustainable future for humankind.” The Forum is without charge and is open to all, but we do ask that you register your interest.

Further information and details of how to register can be found at:

Water is life. A secure and reliable supply of water is essential for all life forms.

For more information and to register for the live webinar and free video replays, go to: https://creativelyunited.org/climate-artists-series/