Does the largest planet in our solar system hold the biggest mysteries? The gas giant, Jupiter, certainly has its fair share of unanswered questions just begging astronomers to answer. Jupiter’s striped and spotted surface has a commanding presence, but its most striking feature is the large red oval crossing its lower hemisphere. This is the Great Red Spot.

Figure 1. A look at Jupiter and its Great Red Spot from Voyager 1, https://photojournal.jpl.nasa.gov/catalog/PIA02855, NASA/JPL.

A Background on Jupiter

As the largest planet in our solar system, Jupiter’s striped and spotted surface has a commanding presence. Jupiter has an extremely fast rotation which forces its atmosphere in to a turbulent state, forming storms that dazzle. The extreme speed of Jupiter’s rotation is in part due to the rapid size change between its equator and poles. To put this difference into perspective, the diameter of Jupiter is roughly 11 times that of Earth, but the diameter of the poles is almost 10,000 km shorter.1 This actually gives Jupiter a somewhat squished shape, which is only possible because Jupiter is made up of compressed gases and not solid rock like earth. It is important to note that gas planets like Jupiter use vaporized rock and gas as their starting ingredients,2,3  which could explain why Jupiter’s shape is not uniform. It is theorized that Jupiter was formed with multiple clouds of gases in our solar system, which accounts for the diversity of Jupiter’s gases.3 The gases of Jupiter’s atmosphere are being violently mixed together by its intense wind speeds of over 650 km/hr. These winds act on layers 3,000 km deep into the planet.2 Jupiter’s upper atmosphere has been the easiest to observe and determine its composition. Methods include spacecraft observations at a (relatively) intimate level to Jupiter and observations made through technology here on earth.4 The key elements of Jupiter’s upper atmosphere are carbon, hydrogen, oxygen, helium, and nitrogen,4 components that closely resemble those of earth, but are contained in molecules and states much different than those here at home. Do not let these elements fool your perception of Jupiter’s atmospheric layers. The presence of other gases like methane, argon, neon, sulfur, krypton, and others throughout Jupiter’s gaseous layers show an environment that could not be more shockingly different from Earth.5

What is the Great Red Spot

Figure 2. A close up of Jupiter’s massive storm as seen from the JunoCam, https://solarsystem.nasa.gov/planets/jupiter/overview/, NASA/JPL-CALTECH/SWRI/Kevin M.

Whether the spot that we know as the Great Red Spot — rather than a different spot on Jupiter — was initially discovered by Hooke, Cassini, or Pritchett, this violent storm has been raging for a century and a half at the very least. The storm is still studied today due to the fact that it is an astonishing phenomenon and because it has importance in the modern scientific world. NASA’s Amy Simon, who specializes in planetary atmospheres, suggests that the study of the Great Red Spot can lead to a better understanding of the Earth’s weather. The idea behind this is that the physics involved in Jupiter’s weather is the same physics that applies to Earth’s weather. She is also hopeful that the studies of the Great Red Spot will improve our understandings of possible conditions for extrasolar planets.8

The Colour of the Great Red Spot 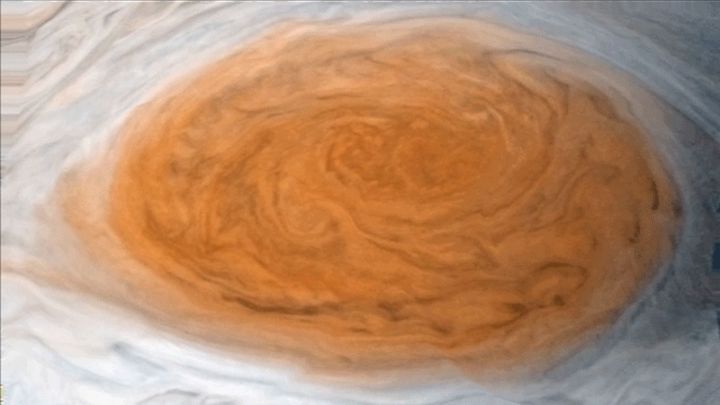 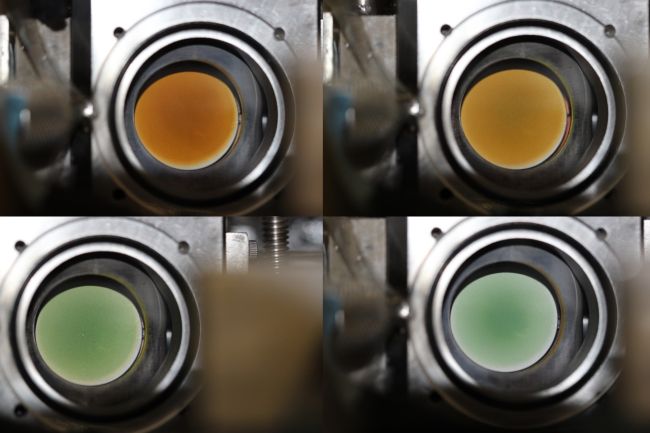 NASA’s Cassini team scientist, Kevin Baines, first had other thoughts about the source of the red colour. He theorized models that proposed the Great Red Spot is a white or grey colour under the red layer that forms from the Sun’s rays. This means that the red we see is only thin top layer to the spot that is red due to interactions with solar rays. To test this theory, Baines and his team members had initially hypothesized that it was the breakdown of ammonium hydrosulfide — which is part of one of Jupiter’s major cloud layers — that caused the red colour. After testing this hypothesis with the application of UV light however, the substance was green instead of red. They then turned to combinations of ammonia and hydrocarbons before discovering that ammonia and acetylene, when hit by UV radiation, would cause an effect that was the same as the red colour of the storm.10 These experimental results are shown in Figure 4, which display images taken during Baines’ experiments. Over 200 experiments on composition and conditions have been conducted in an attempt to determine why the Great Red Spot has such an intense colour,9 but all of this is only theoretical and speculative. Until a probe can be sent into the spot and collect actual samples, we may never have a definitive answer on the colour of the Great Red Spot.

Jupiter’s Weather and how it Favours the Great Red Spot

The Juno mission has been able to do what has not been done before, and that is to involve the public in the gathering of data. This concept is called citizen science and allows members of the public to access and analyze the images that are taken by Juno in an open database. In this database, called JunoCam, there is the ability for anyone to contribute to what they would like to see the Juno spacecraft cover, the images that have been captured of Juno, and to discuss findings and research related to the Juno project. This is an important development in astronomical research as it allows more data to be processed than would be possible in the time that scientists have, as well as bridging a relationship between the average person and the scientific community. These opportunities are critical to fostering care and support from people on a global level, and we can only hope that citizen scientists will be able to contribute answers to the mystery of the Great Red Spot throughout this project. If you would like to contribute to NASA’s Juno mission, its homepage can be found here: https://www.missionjuno.swri.edu/junocam

Juno was able to figure out more properties than the previous missions to Jupiter and the Great Red Spot. While passing over the Great Red Spot, as of April 3, 2017, Juno recorded the size of the storm to be 16,350 km, or 1.3 times the size of Earth.10 Juno was also able to determine that the roots of the storm go as deep as about 300 km into the atmosphere. This is between 50 and 100 times deeper than the oceans on Earth reach. It was also found that the base of the storm is warmer than at the top.11