A look at the globe of Venus. Image courtesy of NASA/JPL

An Introduction To Venus

While Venus and Earth are very similar in their size, mass, and gravitational strength, the atmospheric composition of these two planets is extremely different. Venus has a very dense atmosphere that is composed of 96.5% carbon dioxide.1 This leads to a runaway greenhouse effect that traps heat within the atmosphere.2 This is one of the major factors that causes the average temperatures on the surface of Venus to be 464°C.1 The planet of Venus is covered with clouds composed of sulfuric acid that are several kilometers thick.2 Because of this, we can’t view the surface of Venus simply by looking at it, we need the assistance of other imaging equipment.

In the following paragraphs we will look at the history of various probes sent to Venus while discussing their findings and the equipment used by each probe. Initially we will discuss the Mariner 2 probe and its findings on Venus’ atmosphere. Next up we will look at the Vega 1 & 2 probes with a brief discussion of the equipment they used to study Venus. Following that will be an examination of the Pioneer Venus Orbiter and its various findings with regards to Venus. Finally we will finish up with a mentioning of the Venus Express and its relevance to the study of both Venus’ atmosphere and Venus’ surface.

In the link embedded below the video will give a brief overview of Venus including but not limited to some facts on Venus’ orbit, temperature, and atmosphere, the view of Venus from Earth and a discussion of the finding of probes sent to Venus including the Venera probes. 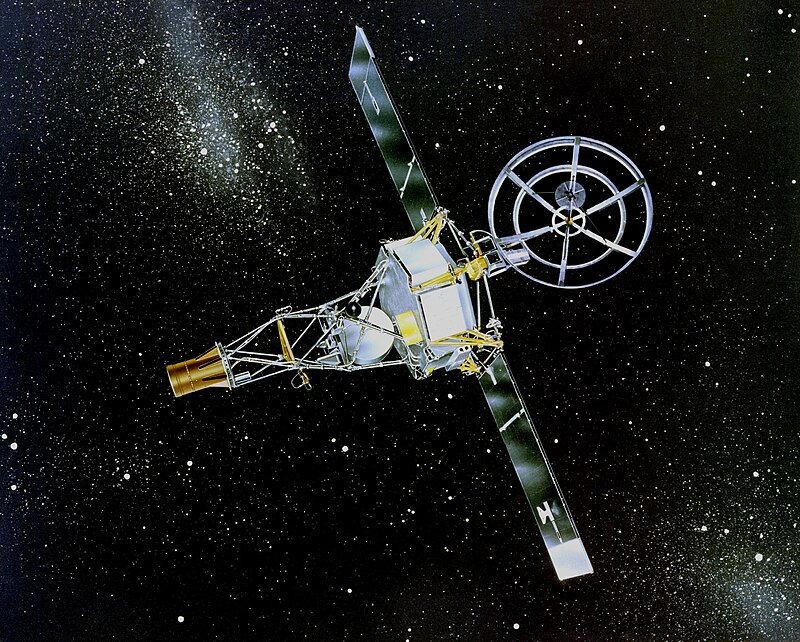 An artists concept of Mariner 2 courtesy of NASA/JPL.

Mariner 2 was launched in the Atlas-Agena B rocket on August 27, 1962 from Cape Canaveral.3 Its objective was to observe and return information on the atmosphere, magnetic field, charged particle environment, and mass.3

The equipment on this mission managed to observe Venus’ slow retrograde motion, a high surface pressure caused by the atmosphere, high surface temperatures, an atmosphere mostly composed of carbon dioxide, constant cloud cover with the highest altitude reaching 60km, and was unable to detect a magnetic field.3

Having the atmosphere composed of mainly carbon dioxide is a major cause of the runaway greenhouse effect on Venus.4 As the Sun heats up Venus this causes the planet to emit infrared radiation which is trapped because of carbon dioxide acting opaque on the infrared wavelength.4 This is part of the reason the planet’s surface temperature is extremely high.4

The video outlines how the Mariner 2 could make the trip all the way to Venus using computers from that era. It discusses how the mission took a long curving orbit rather than a straight path towards Venus. It also highlights the success of Mariner 2 in reaching its intended orbit on the proper date of arrival. A picture of Vega 2 courtesy of NASA

Vega 1 was launched December 15, 1984 and Vega 2 was launched on December 21,1984.5 The two Vega satellites were identical and transported the Venus entry probes to Venus. Once there they would release the probes into the atmosphere before moving on to observe Comet Halley.5 The probes were used to study the atmosphere and the superficial crust of Venus.5

Once it landed the probe would acquire a small surface sample on which to perform a gamma spectroscopy and x-ray fluorescence.5 A constant-pressure balloon was also released into the atmosphere with the probe. This balloon was used to measure aspects of the cloud system of Venus and it floated at approximately 50km.5

The launch day for this orbiter was May 20, 1978. 6 The Pioneer Venus Orbiter was put into orbit around Venus, to carry out several different experiments, on December 4, 1978. 6

The orbiter could measure the vertical distribution of clouds, surface characteristics, infrared emissions, ultraviolet emissions, magnetic field, thermal characteristics, gravity field, and the upper atmosphere of Venus.6 There were also a couple of experiments to determine solar the solar wind and its interactions with Venus. 6

This video discusses how the major objective of the Pioneer Venus Orbiter was to investigate the effect of Solar wind on Venus’ environment, use radar imaging to map the surface, and to study the upper atmosphere.

The Venus Express was launched on November 9, 2005 and arrived at Venus on April 11, 2006. 7 The Venus express then remained in orbit and operational until contact with the satellite was lost on November 28, 2014. 7

The Venus Express is very important to our research because the focus of its mission was to study the atmosphere and plasma environment of Venus. 7 It looked at the role greenhouse gases played in the creation of the atmosphere and studied aspects of the surface such as volcanoes and seismic activity. 7

A topographical map of Venus, image courtesy of NASA/JPL/USGS

Even with its harsh surface conditions and its intense atmospheric conditions Venus can still be measured with the help of tools created specifically for the job. A different experiment must be developed for each separate group of data that is being collected. Looking at the tools used to obtain data on an extreme planet such as Venus gives us a better understanding of how scientists obtain data throughout space and how they can overcome conditions where most equipment would be unable to survive.