Saturn’s Rings and the Cassini Division 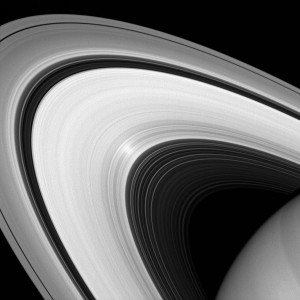 Saturn’s rings puzzled astronomers for many years after they were first observed in 1610. Saturn is not the only planet with rings. In fact, all the other gas planets-Jupiter, Uranus, and Neptune-also have rings but they are just not as large or vivid as Saturn’s. They are not as vivid because they contain fewer particles and thus do not reflect as much light.1 Saturn’s rings are not solid as they may appear, but are made up of particles of water ice of varied sizes. Each ring is named with a letter in alphabetical order as they were discovered. These bands are separated in many cases by gaps of varying sizes, the largest of which is between the “A” and “B” rings. There are several factors which contribute to the impressive appearance of Saturn’s ring system, such as their origin and composition, and their interactive relationship with Saturn’s moons. These observable characteristics of the rings have contributed to scientists’ ability to determine the origins of features in the rings, such as the divisions between them.

Origin of the Rings 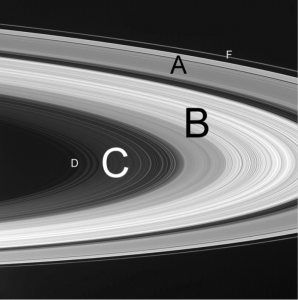 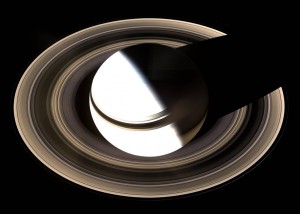 Saturn’s rings have several gaps between them that are caused by gravitational forces between the particles in the rings and the moons orbiting nearby. The largest gap is between Saturn’s A and B rings which is called the Cassini Division, and it is caused by the pull of one of Saturn’s moon- Mimas.2 The division is 4,795.845 kilometres across (around half the distance across Canada), and is located 118,125.85 kilometres from Saturn’s surface (approximately the same distance as three trips around the earth). Mimas is about 183,465.216 kilometres from Saturn’s surface (about four and a half trips around the earth) and is 395.899 kilometres across (less than ¼ the size of Earth’s Moon). Mimas is about 65983.104 kilometres away from the Cassini Division (or about one and a half trips around the Earth).3 The relative distances of Mimas and the Cassini Division from Saturn are an important factor in explaining what causes the division.

What do we Know about the Cassini Division?

The three main rings of Saturn have been observed for centuries, and over this time many astronomers have studied their properties and their behaviour in relation to the planet itself. One of the first things they discovered is that the rings are unattached to Saturn, but remain suspended in space because of the gravitational pull of the planet. They move in orbit around Saturn at speeds that depend on their distance from the planet, opposing the pull of gravity.4 The inner parts of the rings move around Saturn faster than the outer parts, all in accordance with Kepler’s third law for small objects revolving about a much larger one.

In words, Kepler’s Third Law states that “The ratio of the squares of the revolutionary periods for two planets is equal to the ratio of the cubes of their semi-major axes.” This means that the particles closer to a large body (in this case, Saturn) will orbit faster than particles that are farther away. The array of the particles has been flattened and spread out to a thin, wide disk as the result of collisions between particles over the course of many years.4

Orbital resonance is a gravitational phenomenon that occurs when two smaller bodies are orbiting a parent body in a particular pattern. The pattern is determined by the relative sizes and orbits of the objects.5 Astronomers have observed that a ring particle in the Cassini Division goes around Saturn twice for every time Mimas goes around once. This is known as a 2:1 resonance orbit. The resonance between Mimas and the particles in the division destabilizes the orbit of the particles (since they are generally smaller than the moon) and pulls the particles out toward Mimas, causing the gap between the rings.5

The destabilization occurs because every second time the particle orbits Saturn, it passes Mimas in the same spot, meaning that the ring particle is pulled on by Mimas’ gravity at the same spot in its orbit every time it aligns with Mimas (every second orbit of the particle). Mimas has a substantial gravitational pull and over millions of years, this periodic tug has yanked out all the particles between the A and B rings, causing the Cassini Division.5 The Cassini division was named after the Italian astronomer, Giovanni D. Cassini (1625-1712) who discovered the division in 1675.6 Cassini was born on June 8, 1625 in the Republic of Genoa- now a part of Italy. Cassini’s research focused almost exclusively on astronomy and became increasingly involved in this area during the Scientific Revolution and throughout his life. He was the first to observe four of Saturn’s moons: Iapetus (1671), Rhea (1672), Tethys (1684) and Dione (1684).7

After Cassini’s findings, there were no major discoveries made regarding Saturn and its ring system until spacecraft flybys were made possible by advancing technology in the 1970s fuelled by the ‘space race’ of the Cold War. NASA’s Pioneer 11 spacecraft was the first to visit Saturn in 1979, getting within 20,000 km of the planet’s cloud layers.8 It was followed by Voyager 1 in 1980, and Voyager 2 in 1981, which came within 124,000 kilometers and 101,000 kilometres of Saturn’s cloud tops on their respective flybys.9 Pioneer was able to send back low resolution images of Saturn’s surface. The Voyager crafts measured Saturn’s atmosphere, rotation temperature, and density as well as capturing higher-resolution photographs of the planet’s surface and rings.9 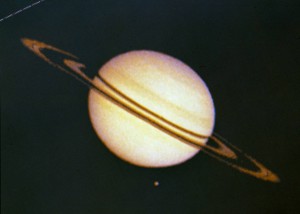 Pioneer 11 Image of Saturn and Its Moon Titan. Credit: NASA

Data Collected by the Voyager Spacecrafts:9 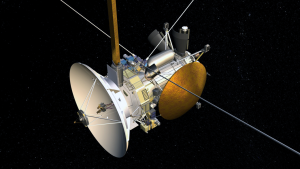 There is currently a satellite in orbit around Saturn called the Cassini Satellite, which is presently on its second extended mission known as the Cassini Solstice Mission. The satellite’s first extended assignment was called the Cassini Equinox mission. The Cassini Solstice mission will continue until September 2017. The satellite arrived at Saturn just after the planet’s northern winter solstice so it will be in space for a complete seasonal period. Saturn’s orbital period (the length of time it takes to complete one full orbit of the sun) is 29 years. During this mission, the Cassini Satellite will study the moons Titan and Enceladus. Close to the end of the mission it will more closely explore Saturn and its ring structures.10

The spacecraft was launched with two main elements: The Cassini orbiter and the Huygens probe. The probe was designed to explore the surface of Saturn’s largest moon, Titan. When the probe landed on Titan, it allowed scientists to study the complex organic chemistry of the moon’s atmosphere for the first time. The orbiter of the spacecraft remains in orbit and takes readings and measurements from a distance. Between the two parts of the satellite, the spacecraft was equipped with the necessary instruments to gather data on 27 diverse scientific investigations.11 A few examples of the types of instruments used are:11

The video below gives a brief overview of the Cassini missions and the information it has gathered over its fifteen years of exploration.