An Exploration into the Exoplanet “Luyten B”

Exoplanets are planets that are located outside of our solar system. They were once thought to be rare but, as time has gone on, more and more are being discovered. Luyten, or GJ273, is a star located 12.36 light years away from the sun.(1) Surrounding it, are two incredibly intriguing exoplanets that have caught the attention of many astronomers. Luyten B is a planet that is incredibly close to earth, and is categorized as a potential “Super-Earth”. While there are many variables that are unknown, which may dismiss the planets habitability, the possibility and promise of Luyten B having potential to hold liquid water on its surface makes it one that can bring excitement to research and curiosity. What our research will explore is how Luyten and its exoplanet Luyten B were discovered, the type of star it is and how this affects habitability, the habitability zone and its implications for potential life, and its orbit and rotation. Luyten C, Luyten’s inner planet, is located too close to its host star to have the chance to have liquid water, as shown in Figure 6 below.An incredibly fascinating aspect of this exoplanet in particular is that upon the release of the hopeful likelihood that this planet could potentially support life, METI (Messaging extra-terrestrial Intelligence) International put together an encoded sonar message containing 6 different musical compositions and encoded mathematical and scientific tutorials. Doug Vakoch, president of METI states that; “we’ve sent a signal we would like to receive here on earth”. They predict that if the message is received and processed we could receive a response as soon as 2042.(2)

Luyten b, or GJ 273b, was discovered on March 17, 2017. (3) It was discovered at the High Accuracy Radial Velocity Planet Searcher (HARPS). HARPS is basically an extremely powerful telescope used for finding planets and it was developed in 2002.(4) HARPS has been used to find over 130 planets and Luyten B was one of them. The method that was used in order to discover Luyten B was Doppler spectroscopy. Doppler spectroscopy is also referred to as the radial velocity method. (5) This method observes the light given off by a star and any variations in the stars light waves will often be due to a planet that is orbiting it. (6) Doppler spectroscopy is a common method used when discovering exoplanets. 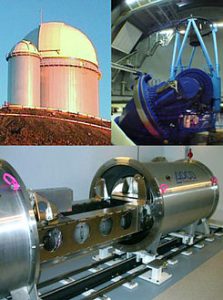 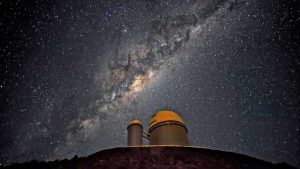 Luyten happens to be a red dwarf star. Red dwarf stars are faint and cooler than the sun, but are the most common star in the Milky Way. They are also found to have an increased chance of an orbiting habitable planet around them. Their zone of habitability happens to be much closer to the star than with our sun, and red dwarfs are known to have stellar eruptions that could project extensive amounts of radiation onto the potentially habitable planets. (7) The zone of habitability goes by a few names such as the life zone or the Goldilocks zone. This is a zone where a planet is in orbit far enough away from it’s home star so that it is not too hot or too cold. (8) Being in this zone however does not automatically mean that it fits these parameters as there are other factors that can play into a planet’s habitability which we will discuss in more detail later on. 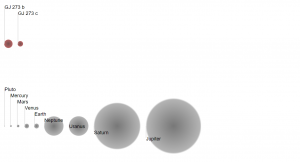 Few things are known about Luyten B’s orbit. What is known is that the orbit of Luyten B is heavily dependant on the existence of other planet in the system, Luyten C. Also that Luyten B has an orbital period of 18.65 days, which is much shorter than even that of Mercury in our own Solar System, which is 88 days.(9) With an orbital period of this length, Luyten B’s distance from its parent star, Luyten, is only 0.091101 AU. Now at a distance such as this, many expect Luyten B to be tidally locked to its parent star, however this is not the case. Due to its orbital resonance with Luyten c, Luyten b has avoided becoming tidally locked with its star.  (10) An example of tidal locking can be seen in the Moon which is held by Earth’s gravitational pull so that it always having the same face towards the Earth. Orbital resonance involves the way Luyten B and its sister planets orbit the parent star. For instance every time one planet orbits the star 4 times, the other planet will orbit the star 3 times. The small integers are what matter, for the planets exert a gravitational force on each other periodically throughout orbit and keep the planets from colliding, but also keep them from being tidally locked to the parent star.(11) This is the exact case for Luyten B, Luyten C, and the parent star Luyten A. Below is a picture outlining the simple integer orbits of Orbital Resonance. For every orbit the middle moon makes, inner most moon will have completed exactly 2 orbits. 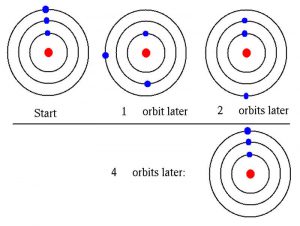 The discovery Luyten B and it’s orbit were by the radial velocity method, which relies on the fact that a star does not remain completely stationary when it is orbited by a planet. It moves in a small circle or ellipse, responding to the gravitational tug of the planet. When viewed from a distance this affects the star’s normal light spectrum. If the star is moving towards the observer, then its spectrum would appear slightly shifted towards the blue; if it is moving away, it will be shifted towards the red. Using highly sensitive spectrographs, it is possible to track a star’s spectrum. If the shifts are regular, repeating themselves at fixed intervals it means that the star is moving ever so slightly towards the Earth and then away from it in a regular cycle. This is caused by a body orbiting the star. (12)

The habitable zone has been discussed above in “Luyten, The Red Dwarf Star” however there are other factors that are also important in determining habitability. The star that the planet orbits must also be in a stable state. Some variable stars, such as Scuti’s and Cepheids, not only have great changes in the way they appear to us in the night sky, but they also have a large change in their characteristics, such as the radius and temperature,(13) which we already determined are major factors in establishing this zone of habitability. If this zone constantly flux’s then the conditions on the planet will also be varying to an extreme degree, which hurts the ability of the planet to be able to sustain life. Luyten B’s star, GJ 273, is a main sequence red dwarf star, meaning it is smaller in size to our own sun, and mostly inactive, so it could very well fit these parameters. (14) The catch to this star is that with being smaller and much cooler, the habitability zone is much closer to the star then in other exoplanet systems. This makes the chance of encountering stellar activity much more likely.

The planet as well would need a particular type of inner core. What makes the Earth so unique is the magnetic field that is generated, which protects the planet from dangerous solar radiation and flares that are emitted by the star that we orbit. This magnetic field is created by the core of our planet. The inner core, being solid due to the mass amounts of pressure and forces exerted on it, is surrounded by a liquid outer core, in that state because of less pressure applied to it and being mostly made of metals. The outer core being a liquid means that it has currents, just as the ocean does. The less dense matter rises to the top while the denser matter sinks, all while the Earth rotates, which creates what is called a Coriolis force. All this motion of liquid metals creates electrical currents, which can produce magnetic fields. These now charged metals move through magnetic fields and continue to create more and create a self-reliant loop known as Geodynamo. The Coriolis force continues to be in play as it helps to align the magnetic fields as they produce and maintain one vast magnetic field that covers the Earth, which acts as our shield against the sun’s radiation and flares.(15) So, for a planet to be habitable it must be kept safe from the sun that it relies on, and to do that it must have a magnetic field of some degree. To have this field it must have some type of molten core able to produce it, either through the same method or some way that we have yet to observe.

The planet in question also should be able to sustain an atmosphere, although it does need a magnetic field to sustain long term, but the atmosphere is important for being able to regulate a planet’s temperature. (16) An atmosphere can help to regulate temperature, the same way it does on earth here, by being able to trap infrared radiation from the star if it is composed of elements such as carbon dioxide and water by using the greenhouse effect (An extreme example of this is is Venus). This can create a larger area of the planet that may be hospitable.

The difficult aspect about this planet though is the way that it was discovered. Using a Radial Velocity method(17) instead of a Transit method means there are many unknowns about the planet. The transit method (a method of exoplanet detection by examining the dimming of a star as a planet orbits in front of it(18))  helps to determine a planet’s radius and mass by combining spectroscopy and photometry. Using this we can usually gather its density as well as it’s general composition.(19) So, without being able to see an exoplanet transit with Luyten B there is still much about it that we do not know.

While there is much we do no know about Luyten B there is still much potential. It’s theorized orbit puts Luyten B at an acceptable range from its star to have potential of being able to host liquid water.

Luyten B has much mystery surrounding it due to the nature of it’s star, Luyten, as well as the orientation of the planet’s orbit, which still has much to be known about it, such as it’s composition and atmosphere. The size of Luyten, being a dwarf, makes the radius small and difficult to observe and creating trouble in seeing an exoplanet transit as there is a smaller area to observe. We resorted to learning about the planet through the radial velocity method. We have been able to determine an orbit of 18.65 days, while also being in resonance as to not be tidally locked. Beyond this, we can only hypothesis about the planets habitability as we do know know of its chemical makeup, atmosphere, or true rotation. It is a planet that will continue to exhibit wonder, curiosity, and hope.

(2) CNet. We just sent a message to aliens who could respond by 2042, https://www.cnet.com/news/seti-space-aliens-extra-terrestrial-intelligence (Accessed Feb 2 2018)

(13) AAVSO. Variables: What Are They and Why Observe Them?, https://www.aavso.org/variables-what-are-they-why-observe-them (accessed 01 March 2018