The Effects of the Sun on Comets

Heat, radiation, solar wind, and gravity are four major influences and effects between comets and the Sun. Comets were first discovered with a telescope in 1680 by Gottfried Kirch and have two origins, the Kuiper belt and Oort Cloud. Depending on the comet’s age and their interaction with the Sun, the surface of each comet differs. We see this in the different variations between the Wild 2 and Temple 1; with the Wild 2 comet maintaining its surface due to lack of interaction with the Sun, and the Temple 1 comet losing its surface because of its constant orbiting of the Sun. Gottfried’s discovery of comets has led to other discoveries including how comets interact with heat, radiation, solar wind and gravity. The Sun’s solar heat causes the formation of the comet’s coma. Comets that get close to the Sun warm up and develop this coma, which causes the ice on comets to turn into gas. The more exposed comets are on their elliptical pathway, the more gases are produced. This gas trail is known as a plasma tail. Due to the charge-exchange reactions in the coma from the Sun, it creates the distinctive twists and knots. In addition, radiation from the Sun is wave energy that directs the dust and gas tails of a comet. The radiation is coming directly from the Sun, so as a result the tails are pushed away from the Sun as well. Solar wind is particles shot out from the Sun that knock loose material from a comet’s surface, causing it to erode. Both radiation and solar wind from the Sun play important roles in a comet’s display and life. Finally, gravity is the force that powers the orbits of comets, and an understanding of gravitational force allows us to interpret the elliptical motion of these bodies in our pursuit of astronomical understanding. The comet’s constant speed changes as a result of distance changes in relation to the Sun help to explain why the orbits are so elliptical in contrast to the planets, we are more familiar with. Comets are one of the smaller bodies in our solar system and help show us how much the Sun influences everything around it. This paper will examine four major influences and effects that occur between comets and the Sun’s heat, radiation, solar wind and gravity.

The Sun and Comets 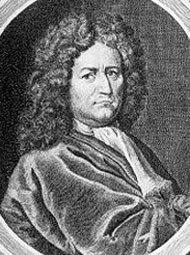 The Sun is a “hot ball of glowing gases” while comets are “cosmic snowballs of frozen gases, rock and dust” that orbit the Sun.1 As comets get closer to the Sun, they heat up, discharging gas and dust.2 Prior to discussing the effect of the Sun on Comets, outlined below is an overview of Comets. Gottfried Kirch (Figure 1), a German, discovered comets in 1680. Kirch was first to view a comet with a telescope, an important discovery.3 Comets have two origins: first, long-period comets that come from the Oort Cloud. Second, short-period comets originate from the Kuiper Belt. In general, comets are too faint and must be viewed through a telescope. However, when comets pass close to the Sun, their tails and coma reflect sunlight absorbed from the sun, making them visible without a telescope.4 There are four parts to a comet: the coma, the ion tail, the dust tail and the nucleus (Figure 2).5 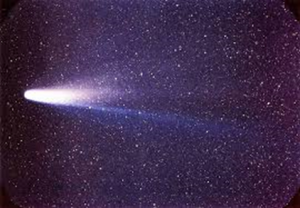 The coma made of comet dust and ice are particles and gases that form clouds around the nucleus while the ion tail is created from gases from the coma. The dust tail is formed from dust particles of the coma.6 The nucleus, referred to as the heart of the comet, is a mixture of dust and ice particles along with carbon dioxide, methane and ammonia and is the solid part of a comet.7, 8 The surfaces of a comet nuclei (the nucleus of the comet) differs (Figure 3) depending on Sun’s alteration of it. As we see in Figure 3: Comet Wild 2, the comets are covered in craters: these surface holes are “consistent with high-velocity collisions between the comet and smaller meteorite like objects” while the surface of Temple 1 reveals an older comet.9 Referenced as a “marshmallow dipped in sugar,” every five and a half years, Temple 1 “is moved nearer the fire and withdrawn to a cooler place. With each approach to the Sun, a bit more of its constituent dust and volatile material is driven off into interplanetary space; so it evolves.”9 Using the marshmallow analogy, as marshmallows dipped in sugar get closer to the fire, they start to lose their surface like with the Temple 1 comet which also starts to lose parts of its surface (i.e., its constituent dust and volatile material) as it nears heat; in this case, the Sun. Unlike Temple 1, Wild 2 is a newer comet and has not orbited the Sun as much at a close distance.10 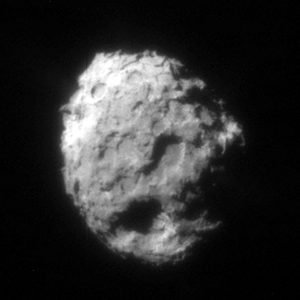 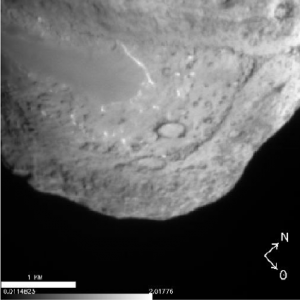 Solar heat is important to consider while examining the effects of the Sun on comets. As theorized by astronomer Gerard Kuiperin in 1951, comets come from a disc-like belt of icy bodies.11 The extreme solar heating and plasma environments that comets encounter can explain to us the aspects of their behavior.12 These icy objects are often pushed by gravity into the orbit of the Sun. Each comet carries a part called the nucleus which contains icy lumps and frozen gases. When comets come into orbit with the Sun, they warm up and develop an atmosphere. The solar heat from the Sun affects the comet’s ice and changes them into gases, therefor the atmosphere or coma will become larger and can extend hundreds of thousands of kilometres.11 Comets are completely frozen when they are far away from the Sun, and as they move closer, their appearance changes aggressively. By the time a comet reaches 5 AU within the Sun, the solar heat begins to form the coma, while the escaping atmosphere drags away the dust particles which were mixing with the sublimating ice. The gas tail is also known as a plasma tail, and due to the charge-exchange reactions and photo ionization of atoms in the coma from the Sun, they create the distinctive twists and knots.13 The closer the comet reaches the Sun, the more ice turns into a gas and the intense heat vaporizes the gas and releases the dust which creates the two distinct tails behind the comet.14 The striking feature of the comet’s nuclei is that they can show unexpected behavior. Some will outburst when they are close to the Sun and others will when they are far away.15 That is why while examining comets it is important to consider other factors such as the electromagnetic radiation released from the Sun. 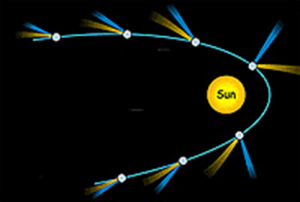 Figure 4: Comet’s tails as they go around the Sun. Sun© NASA
https://www.nasa.gov/audience/forstudents/5-8/features/F_Space_Rocks.html

Gravity is a force that attracts any two bodies toward each other and is the driving force behind orbits in the universe. This gravitational force was first defined by Isaac Newton and is described in Figure 5 below.

One of the interesting properties of comets is the shape and behavior of their orbits caused by this gravitational force. Planetary orbits around the Sun are nearly circular in nature, meaning that they have an almost constant speed and trajectory as they orbit around the sun. Comet orbits around the Sun are more elliptical in nature, and the speed of their orbit is constantly changing as a result. This can be easily explained by the equation outlined in Figure 5. While the masses and gravitation constant stay about the same, the distance is constantly changing, causing the pulling force between the two objects to be constantly changing .19 As a comet approaches the Sun for instance, the distance is decreasing, causing the force between the objects to increase at a rate proportional to (1/d2), thus causing acceleration of the comet towards the Sun. It is worth noting that the reason that the comet is accelerating, and the Sun is staying relatively stationary, is because of Newtons second law(force=mass*acceleration) which essentially states that the force required to accelerate an object is proportional to its mass meaning that in order to move the Sun’s very large mass, a very large force would be required. The gravitational force acting on the Sun from the comet is negligible from the Sun’s perspective, thus allowing the Sun to win the tug of war battle between the two bodies. Getting back to the acceleration of the comet towards the Sun, once the comet passes the Sun, the distance between the two objects is so small, that it causes the comet to take a pretty hard turn and start to travel away from the Sun, following it’s elliptical path. However, once they have passed the Sun, the distance between the two is increasing, causing the pulling force between the two objects to decrease at a rate of (1/d2). This causes the comet to begin decelerating. Once the comets speed has decreased enough, they begin to turn around and follow its elliptical orbit back to the Sun and the whole process starts over again. This orbit is demonstrated by Figure 6. It should be noted that the gravitational forces of other astronomical objects. Planets for instance, can exert enough gravitational force on comets to deflect them from their solar orbit and onto new trajectories. 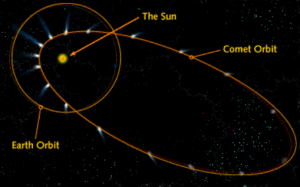 Figure 6: Diagram demonstrating the orbits of a comet and Earth around the Sun http://cse.ssl.berkeley.edu/SegwayEd/lessons/cometstale/frame_orbits.html

In conclusion, comets are beautiful, dazzling objects in the night sky. Discovered in 1680, these chunks of ice and rock tell us a lot about heat, radiation, solar wind and gravitation. Comets come from either the Kuiper belt between Mars and Jupiter or the Oort cloud past Neptune. When comets enter our solar system, the heat from our Sun melts the comet’s ice. The ice turns into a gas, creating a coma and making the comet look like a hairy star. Radiation is energy that is emitted from the Sun and always directs a comet’s tails away from our star; while solar wind comes from the Sun and pelts comets with many little particles that remove dust and other loose material from the comet resulting in erosion. Gravity from the Sun, as well as other bodies, shape the behavior of a comet’s orbit. Newton’s second law and his law of Universal Gravitation are connected broadly to how the Sun affects comets. Many of a comet’s traits are majorly affected by the Sun. Comets are little bodies in the universe that the Sun affects by heat, radiation, solar wind and gravity.

17Williams, Incoming solar radiation is short wave radiation, which is visible light and ultraviolet and NOT ABSORBED by CO2. This radiation is absorbed by the Earth and re-emitted as infrared radiation (long wave) which IS absorbed by CO2., WWW document https://medium.com/@budwilliams/incoming-solar-radiation-is-short-wave-radiation-which-is-visible-light-and-ultraviolet-and-not-1fc99dcd480f