Proxima Centauri B: Is there an Earth-like planet orbiting our nearest neighbour?

Proxima Centauri B is a planet that orbits a star outside of the solar system, which is known as an exoplanet. This exoplanet was thought to be previously discovered in 2012 by astronomers but proved to be a false signal due to insufficient data. Advancements in instruments allowed researchers to verify the signal which led to the discovery of exoplanet Proxima Centauri B in 2016. This is an important finding in astronomy due to Proxima Centauri B’s potential to sustain life with its small orbital axis and optimal temperature range.1 The results of this research will determine what improvements have been made in the field of astronomy that resulted in the discovery of Proxima Centauri B and what that means for the science community today. 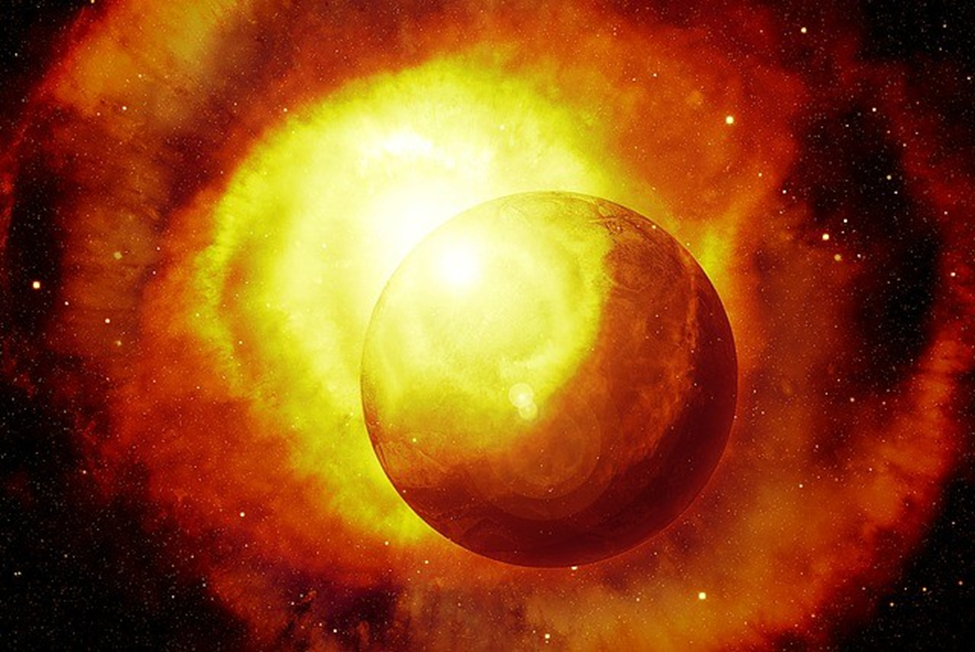 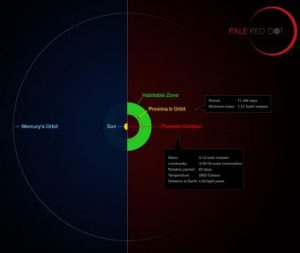 Proxima Centauri (also known as α Centauri C, GI. 551, HIP 70890) is a red dwarf star that is Earth’s closest neighbor, located only 1.295 parsecs away.1 It has an effective temperature of ~3050 Kelvin, luminosity of ~0.2 percent of the sun, radius of 0.14R2, and mass of 12% of the Sun.1 However, it is not able to be seen with the naked eye due to its relative2 magnitude of 11.05, making it impossible to be seen with the naked eye. Proxima Centauri is known as a flare star which means its magnetic activity is unstable and will brighten dramatically at random times.3

However, despite seeming quite different from our own Sun, inhabited within its solar system lies a small planet which is at minimum 1.3x the mass of Earth and orbits Proxima Centauri every 11.2 Earth days.4 Due to its small orbital axis (0.05 AU) and low luminosity, this small distance from the star puts the planet within a region that astronomers call the “habitable zone”, where liquid water could potentially exist on its surface.4 The reason that this planet is so important to us is due to its relative proximity to our own solar system. Potentially inhabitable planets are characterized as having a similar atmosphere to Earth, are less likely to have rocky compositions, maintain a habitable distance from their parent star, and are likely to sustain surface water. However, it cannot be guaranteed that the atmosphere and activity of Proxima Centauri would be able to sustain life as it is close but still far by today’s technology. That is why the planet must be studied extensively before any plans to investigate more closely are made.

Instruments Used in 2012 to Discover Exoplanets

In the early 2000’s, the search for habitable planets around Proxima Centauri became the focus of many astronomers. Michael Endl, an astronomer at the Macdonald observatory in Texas was a part of a team for the search of such planets. The search began with the European Southern Observatory’s (ESO) Very Large Telescope in Chile, but nothing was detectable at the time because Proxima B was a lesser mass than what they were looking for. The search required dedication and tedious observation of data.

The astronomer, Anglada-Escude, claimed that they could have found Proxima B earlier if they had the technology to do so. However, Proxima B was so small that the wobble used to detect orbiting planets fell short of the limit they used for detection. The key instrument used in the detection of Proxima Centauri B was the High Accuracy Radial Velocity Planet Searcher instrument (HARPS).5

The High Accuracy Radial Velocity Planet Searcher or HARPS, is the instrument that was used to first detect the small variation in Proxima B. Radial velocity is the crucial element in the detection of a mass and is used to formulate the existence of a planet using the binary mass.  The Doppler spectroscopy is a technique used to measure radial velocity which relies on a high signal to noise ratio that limits the HARPS technology to closer stars, about 160 light years from Earth.6

When a mass orbits a star, the star does not remain completely stationary. In response to the gravitational pull of the smaller mass, the star will move slightly in a circle or ellipse and cause them to have a different light spectrum.7 This spectrum will shift towards blue if the mass is moving towards the observer and when it is moving away, it will shift towards red. By observing UVES spectrographs, astronomers can map out the shifts from blue to red and detect any patterns of intervals. Observers can then approximately confirm that there is a body orbiting the star and if that body is sizeable to a planet.8 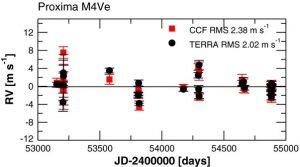 There are advantages and disadvantages to radial velocity. This instrument has proven its technique by identifying hundreds of outer masses, stars, and planets alike. Radial velocity is limited in that it does not confirm detection of potential life-sustaining planets. More commonly, when a variant in the light spectrum is discovered it is that of a larger gas planet that is orbiting the star rather than a inhabitable planet. Large gas planets are in closer proximity to the star and orbit at greater speed causing the star to have a noticeable wobble in the light spectrum. Smaller rock planets are typically farther away and cooler, have longer and slower orbits around the star, and therefore cause only a slight wobble in the star’s spectrum.9

Observing a star while on Earth with the radial velocity is difficult because the observer will be unaware to the mass’ existence if its orbit around the star is perpendicular to the Earth.

In response to these weaknesses in the pre-2016 data, the Pale Red Dot campaign was created and collaborated a collective of observations and analysis of data that astronomers had gathered over the years. The final information would be scrutinized by other scientists, which could take up to a year or two to complete.10 Since 2012, the instruments used in the detection of exoplanets such as Proxima Centauri B have become more sensitive and have had significant increases in resolution which made the likeliness of discovering a planet orbiting Proxima Centauri become more promising.11

Instruments Used in the 2016 Discovery of Proxima Centauri B 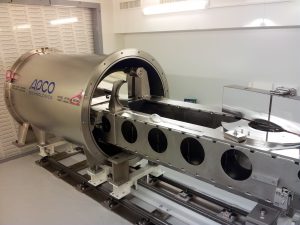 Using previous Doppler data obtained from HARPS and UVES measurements, the signal that detected Proxima Centauri B in 2012 was found to be weak which led to the 2016 re-discovery of the exoplanet. Using new measurements and up to date methods allowed researchers to determine the clarity of signal in the previous data and confirm the signal in the Pale Red Dot campaign (PRD) in 2016. Instruments used in the PRD discovery of Proxima Centauri B were designed to eliminate period uncertainties using new High Accuracy Radial Velocity Planet Searcher (HARPS) observations and quasi-simultaneous photometry, and the Ultraviolet and Visual Echelle Spectrograph (UVES) with iodine gas to attain high-precision radial velocity measurements.1

The ASH2 telescope was used to obtain quasi-simultaneous photometric data. This telescope is a 40cm robotic telescope with a CCD camera and a FOV of 52×82 arcmin.1 Photometric measurements were performed using aperture photometry that identified Proxima in a reference image.

Because of the unclear and variable results of the pre-2016 data using UVES and HARPS instruments, the PRD campaign was necessary. The HARPS PRD observations clearly identify the signal of Proxima Centauri B with the same period as previous data, approximately 11.2days. The combination of all the data from previous and present observations of the exoplanet Proxima Centauri B resulted in a very high significance implying that the period, amplitude, and phase are consistent. The Detection of a Doppler signal at 11.2 d. is shown below in Figure 1.1 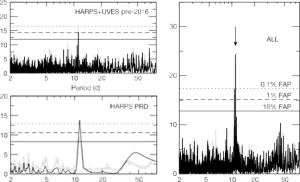 An Exoplanet’s Ability to Sustain Life 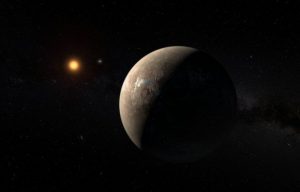 For a planet to be habitable, it must meet some certain criteria to sustain life. The first step is its proximity to a star, its light and heat source.  It cannot be too close that temperatures rise so high that life cannot be supported but it also needs to be within a certain range of survivability, even at the farthest point of its orbital period. The next stipulation is that it is a rock based planet, unlike gas based such as Jupiter, Saturn, and Uranus. The third step is that it has enough size to have a molten core that provides geothermal energy as well as a magnetic field that can protect the atmosphere from solar winds. Finally, an atmosphere is important to maintain the presence of water and provide a greenhouse effect that warms the planet and increases its blackbody temperature.

Being within the habitable zone is not the only reason that Earth can sustain life. Another important factor is the presence of liquid surface water. In order for there to be surface water on a planet, there are four agreed upon conditions that must be met: the geology of the planet must be able to support water, it must contain a substantial enough magnetic field, the planet needs an adequate atmosphere, and the presence of water. The magnetic field’s main purpose for water sustainability is protection from the solar winds bombarding the Earth which can strip away the atmosphere as well as the hydrogen atoms presented after the photo-dissociation effect. The atmosphere is also needed for water to circulate, allowing a constant supply of fresh surface water that can accumulate on the surface. Although it seems strange, one of the reasons for water to be on a planet is that water must first be on the planet. Whether this water came from comet collisions or some other source, for the water to enter the atmospheric cycle, it must first be present. 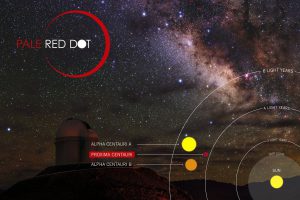 A planet with the potential to sustain human life that is near to our solar system is an extremely hopeful prospect for the human race. However, any mission to provide physical evidence of Proxima Centauri B’s sustainability within our lifetime would be impossible as humans have only briefly begun to explore the universe around us. Despite this fact, technological advances in space exploration are exponentially progressing. Advances in technology between 2012 and 2016 for example, had helped to change Proxima Centauri B from a possible planet that’s existence was called into question, into a confirmed planet of the Proxima Centauri solar system that’s period, magnitude, semi-major axis, and possible temperature range have been able to be accurately identified.

In the future, it is therefore not unreasonable to assume more characteristics of this planet will come to light and help piece together the puzzle about whether or not this exoplanet would be habitable for life. Proximity to the parent star yields hope for the exoplanet but to show further evidence of planetary life, astronomers must scientifically confirm if Proxima Centauri B is a rocky planet, contains a molten core to provide geothermal energy, and an atmosphere that can sustain surface water. Only time will tell what scientific breakthroughs will lead to the confirmation or denial of these important, life-giving steps. 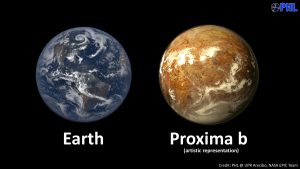