Io | The Moon of Constant Eruption 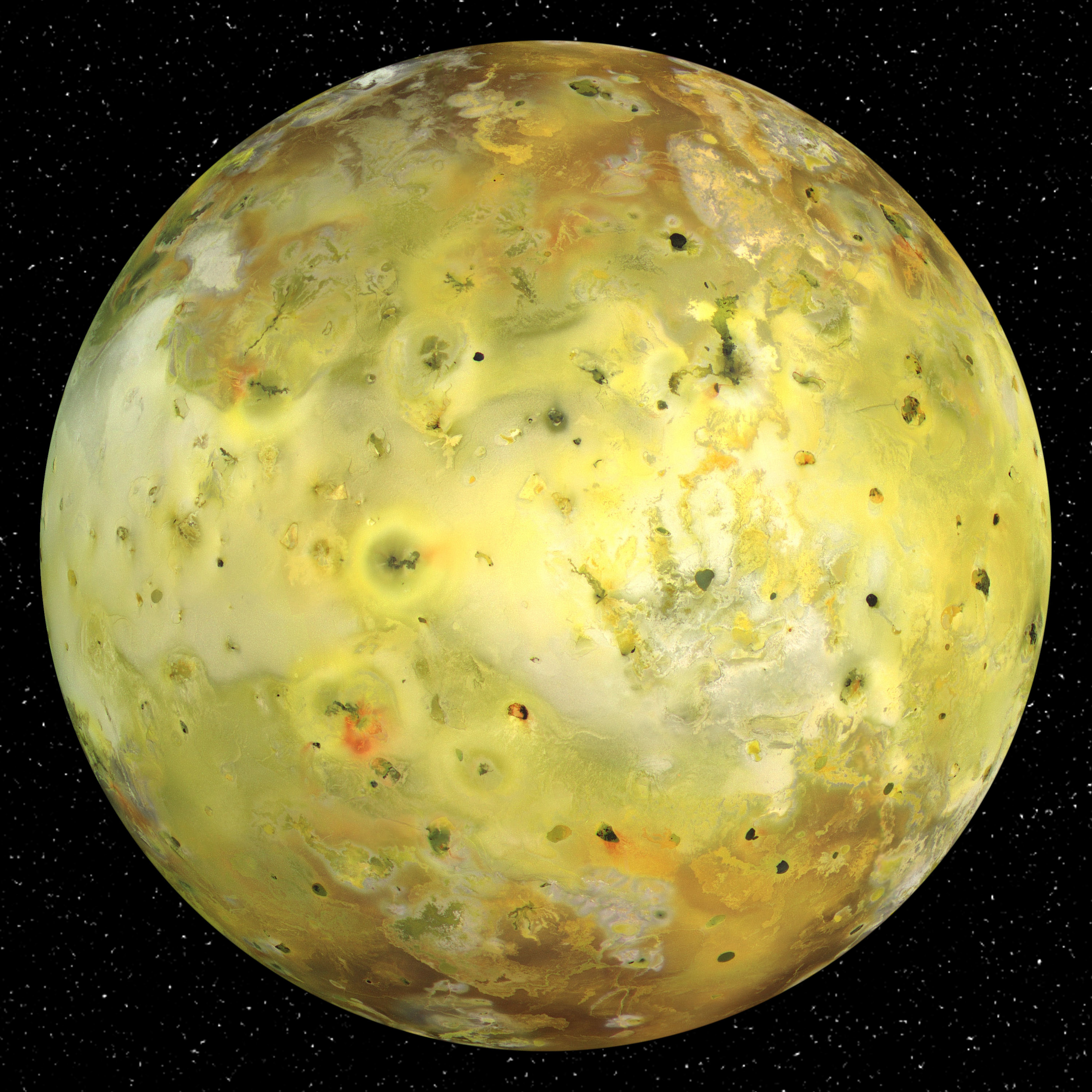 Io is a Galilean moon which rotates around the planet Jupiter, it was discovered on January 8th, 1610 by Italian astronomer Galileo Galilei. Depending on its current rotation Io is around 900,000,000 kilometres from Earth. In 1973, humans were able to better understand the moon as the Pioneer 11 was able to get a closer look at the moon. In the future decades after the initial discovery, many were shocked to find exactly how many volcanoes are on Io. The most recent mission, the New Horizons has shown that Io’s surface has changed significantly compared to the pictures taken from the first images.2

On Earth there are approximately 1500 volcanoes, 500 of which have erupted in recorded history. On a single moon revolving Jupiter, despite being less than a quarter the size; 400 volcanoes lay upon the moons surface with nearly 130 erupting at any given time. This extremely rare phenomenon makes Io the most volcanically active planet or moon in the solar system. From Io’s extremely hot surface to Jupiter’s orbit, there are many reasons to explain Io’s volcanic features.2

( Artists representation of what Io’s interior may look like.  credit: Kelvinsong https://en.wikipedia.org/wiki/Io_(moon) )

Io is subjected to extreme heat which melts away large portions of Io’s interior. The high volcanic activity, which is seen in the numerous volcanic eruptions, lava flows, and uncooled lava lakes, is the result of this heat being released from beneath Io’s hard outer crust.

Io is composed of mostly iron, iron-sulfide, and silicate rock, this matter is constantly subjected to extreme temperatures caused by tidal heating. Some believe of the possibility of a magma ocean existing beneath Io’s crust consisting of both molten and solid rock.6 The movement of a thick liquid such as magma pushing and pulling against the solid rock would cause such friction that would easily explain the intense internal heating of Io. The tidal heating that causes this friction is due to the gravitational pull of the other Galilean moons, Ganymede and Europa, as well as Jupiter itself.

Including Io, there are four Galilean satellites that orbit Jupiter. The other three are named Europa, Ganymede and Callisto.  These moons were discovered by Galilei Galileo in the early 1600’s, thus the name. It’s also worth mentioning that Callisto, the outermost of the four moons, is dependent on Io, Europa or Ganymede, and simply orbits Jupiter at its own pace.7 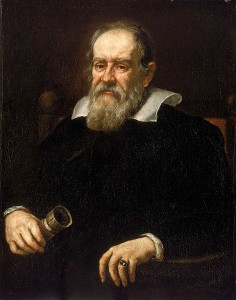 Galileo Galilei.
Courtesy of Wikimedia.                  Galileo was a notorious astronomer during his time. Known as the father of astronomy. His achievements include discovering Jupiter and its moons.

The orbits of Io, Europa and Ganymede are locked together in a pattern. It’s also worth mentioning that Io does four orbits of Jupiter and Europa does two orbits while Ganymede does one orbit in the same amount of time.  The significance of these orbits was realized 200 years later in 1979 when S. J. Peale, P. Cassen, and R. T. Reynolds published their prediction that this accelerated orbit might lead to tidal heating and the melting of Io.8  This “interlocking” of the orbits is called a Laplace Resonance. Each moon is also tidally locked to Jupiter with its rotational and orbital periods being equal. That being said, the alignment of these satellites forces them into peculiar orbits; so much so that the moon’s shape themselves change.  This change is seen most prominently in Io, as it’s the innermost planet to Jupiter. This change is shape and orbit induces more tidal heating between Io and Jupiter, as the gravitational pull reacts to these changes. In turn, this tidal heating is one of the causes of the many volcanoes on Io. 8

The Relationship between Jupiter’s magnetosphere and Io

A magnetosphere is the region where the magnetic field generated by a celestial body dominates over all other magnetic fields. A magnetosphere protects planets, along with their atmospheres, from charged particles which travel out from the Sun. These “spheres” are usually formed from rotating, liquid metal in the core which generates electric currents, and following that, magnetic fields. Many of these fields are in the shape of a comet due to the solar wind which influences the shape of the field. The part of the field closest to the star will become compressed towards the planet, and the part furthest from the star will stretch out and form an elongated “tail”. These fields can range in strength based on factors such as the amount of material generating the field, or if there are any other celestial bodies interacting with the field. 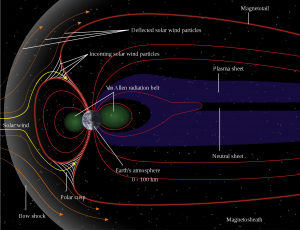 Io is able to generate its own magnetic field due to its core of iron and sulfur which generates a magnetic field as Io rotates. This field weakens and strengthens depending on where Jupiter’s magnetosphere is in relation to Io. Jupiter, and by extension, its magnetosphere, is rotating at a rate faster than Io is moving, and this wreaks havoc with Io’s magnetosphere. Jupiter’s field is generated due to its outer core of liquid metallic hydrogen. Jupiter also rotates at such a speed that gives it a ten hour day. Since Jupiter is moving so fast its magnetic field gets a super charge from the orbital energy of Io. This interaction between Jupiter and Io gives Jupiter a magnetic field strength of around 20 000 times that of Earth’s and around 1 200 times the size, with a similar shape. This is not the only interaction between the two bodies however because Jupiter’s magnetosphere also strips particles off of Io as it sweeps by, and these particles help to heat up Io. 1 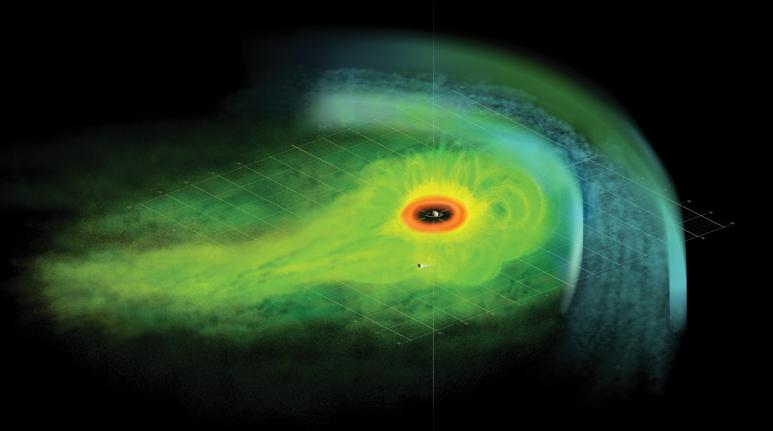 (Artist rendition of the electrical current flowing between Io and Jupiter: https://airandspace.si.edu/files/images/microsites/etp/jupiter-magnetic-field.jpg)

As Jupiter rotates, its magnetosphere rotates with it.  This leads to the gasses expelled from Io’s volcanoes (primarily SO2 and SO) to being ionized and break down into other particles. As these newly ionized particles are magnetic, they are striped from Io’s atmosphere with the sweeping of Jupiter’s magnetic lines over Io, forming a cloud of intense radiation called a plasma torus. This strips Io of about 1 ton or 1000 kilograms every second. As this ionization happens, Io releases light along the whole electromagnetic spectrum. Io orbits at around 17km/s and is embedded in the plasma torus which rotates at about 74km/s. What this means is that the torus moves past Io at a relative velocity of about 57km/s. As Io passes through the plasma torus the plasma density, momentum, and energy is changed through elastic and inelastic collisions with Io’s atmosphere, as well as photoionization. Io will also absorb any plasma that is transferred to the surface. All of these interactions cause Io to be an “electric generator” of sorts. The interactions cause an electric current system with about 3 000 000 amperes. This immense amount of electricity travels between Io and Jupiter via lightning, and it heats up Io’s atmosphere, and in turn Io’s core, in a beautiful display of colours. 4, 9

These interactions that take place between Jupiter and Io are incredible. Thanks to Io’s contribution of mass and energy, Jupiter’s magnetosphere is double in size, compared to what we might expect. This massive magnetosphere helps Io to maintain its constant volcanic activity because of the ionization and stripping of material which then causes the immense amount of electricity on Io. This electricity pumps heat into Io’s atmosphere and so, is able to contribute to the vast amount of volcanoes on Io. This all contributes as to why Io is so interesting, it is the only known place in the solar system where this type of dynamic exists. 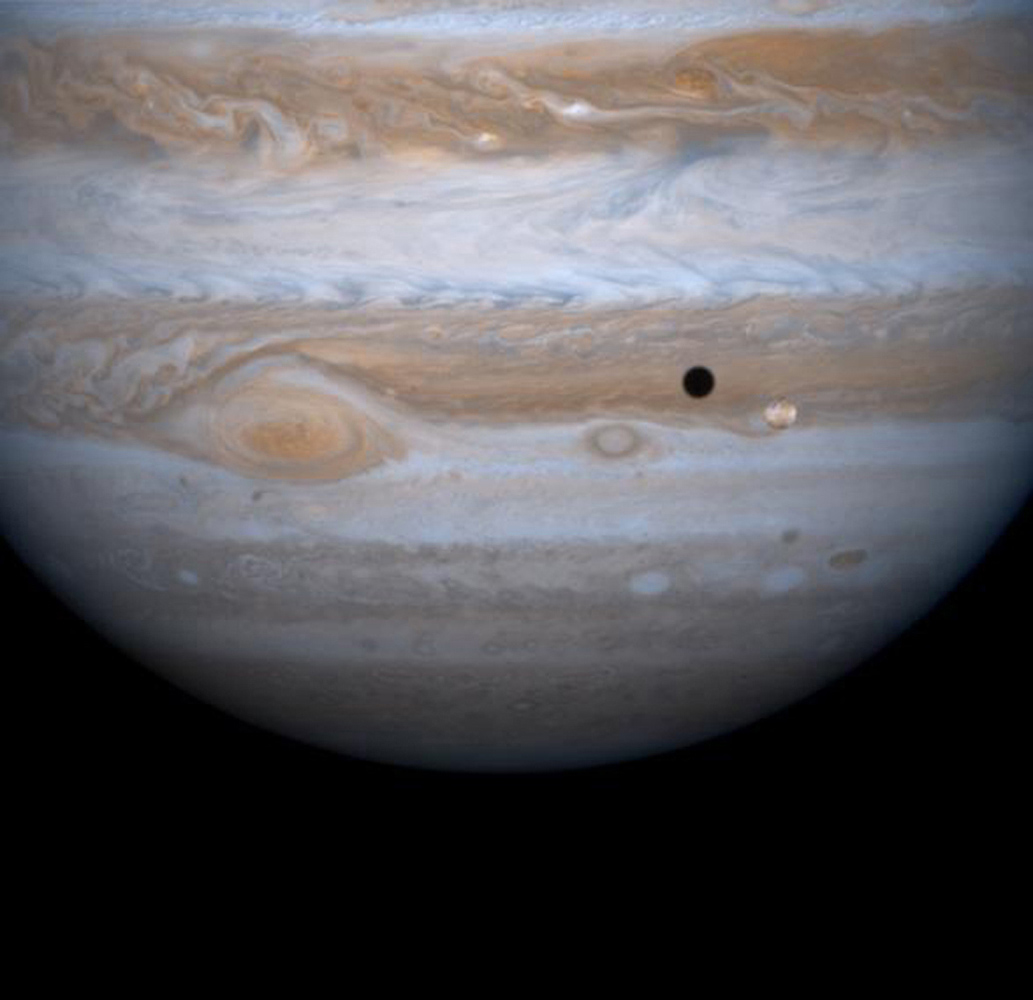 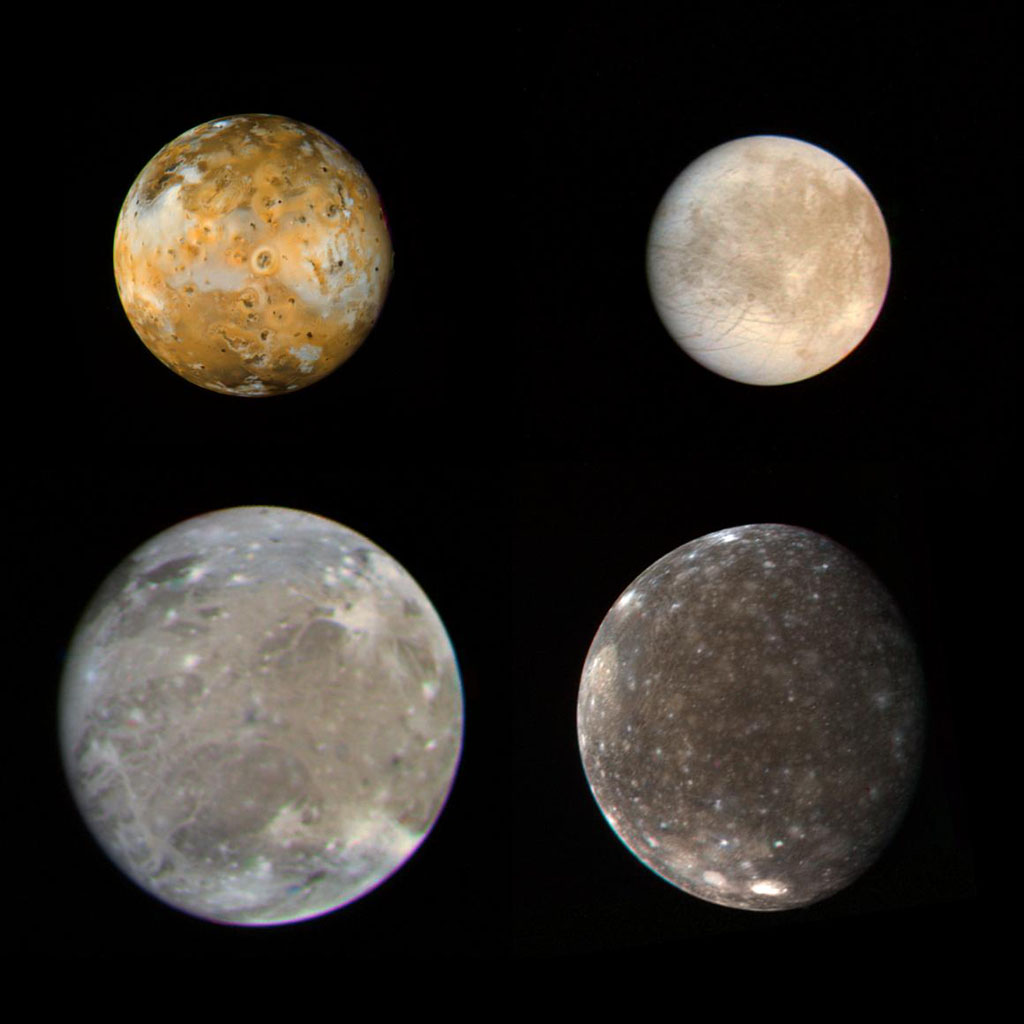 In our solar system Io is the most volcanically active which makes it especially unique. The reason for this is caused by the magnetosphere keeping Io’s temperature extremely hot changing the torus to have sulphur and oxygen Ions. The geology of Io, the makeup of the moon comprised of silicate rock which is able to keep Io in an almost constantly molten state. Finally, the relation Io has with Ganymede and Europa as well as Jupiter constantly pulling on Io molding and shaping it in the process.  These factors combine to make the perfect conditions for the most volcanically active place in the solar system.