The Earth, The Moon, & Climate Change 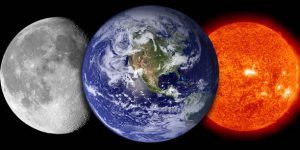 There are many different reasons that people believe the Moon has the ability to affect Earth, and its weather patterns. The real question however, is are they just myths, or can scientific exploration add weight to our observations. This webpage is laid out into different sections that play a part in answering the basic research question, how do we know if and how the Moon affects the Earth's climate? Through extensive research we found many scientific facts to back up certain reasoning, while shutting eliminating others. The following headings are looking into how the Moon affects the four seasons, storms, polar temperature, tides, and most importantly, climate change.

People overlook how important the Moon is in the operation of planet Earth. The Earth and Moon are attracted to each other through gravitational forces. The Moon is attracted to the Earth’s gravitational pull and because of this it rotates around it. When it does this it also helps keep the Earth spinning regularly as, without the Moon, the Earth would wobble as it rotates.1 The Moon also keeps the Earth’s axis at a consistent angle, so without the Moon this angle would vary, making the four seasons of the year inconsistent and difficult to predict. While the top half of Earth is tilted towards the Sun this is when we have our summer months and when the bottom half is tilted towards

the Sun this is when we have our winter months. A shifting angle of Earth's axis would also impact length of days and temperature as well, making them both inconsistent.

Seasonal moons have been believed to have a significant impact on the seasons but this is actually incorrect.3 The moons are named after specific times of the year. For example, the Harvest Moon is the full moon closest to the autumnal equinox, which is the beginning of fall. Traditionally, farmers used the light of the Harvest Moon to extend their harvesting hours but that has no connection to the actual beginning of fall, which can come before or after the Harvest Moon.1

As we strive to find ways that the moon is linked to climate change, it is easier to look at certain effects separately. For example, how the Moon can affect a storm? It has been widely known that a Full Moon can amplify a storm, but how can this happen?

During both full and new moons, the Sun, the Earth and the Moon all align in a straight line. In turn, this intensifies their gravitational effects on Earth. The Moon's do not directly affect the weather. However, when the tides and weather work together, the situation can be worsened. This will lead to problems on shore, such as the hurricanes and storms we face. The problem is, researchers believe this all happens, but have a hard time proving it.

Peter Yaukey, professor at the University of New Orleans, analyzed hurricanes that occurred between 1950 and 2007.2 Peter was able to conclude that hurricanes form and intensify more often following a new moon, than they do during other phases of the lunar cycle. To be exact, the intensification was 49% more than at any other time in the cycle.3  He found that when the moon crosses the equator heading north, it means that the storm will stop its westward motion, and begin heading north. An example of this happening is Hurricane Harvey.

More evidence has since been found suggesting that rain follows the full and new phases of the moon. Calculations were done to find the Moon’s phase for each measurement and it was discovered that there is a slight increase in stream flow around the quarter moon, halfway between the full and new moons. Some believed this was just farmers’ wisdom. In order to link this, the researchers used a database with daily precipitation information for more than 1200 stations, beginning as early as 1895.4 This showed that the farmers’ wisdom was correct. Perhaps these are only small linkage, that in the big picture do not completely have an effect on storms. But, there is enough research to show there is in fact some sort of linkage between the Moon, and storms. 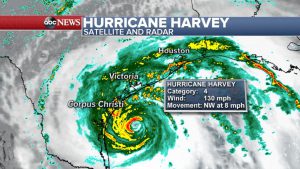 Explaining the effect that the Moon can have on polar temperature can be difficult because the contributions that the Moon has are truly minimal. The infrared energy received on the Earth from the Moon is .00005 times that of the Sun.5  Other studies performed did show a difference the Moon has toward temperature from a full to half moon5.

The study showed that the full Moon had a temperature affect of .2 degrees celsius. Even though the Moon has a little effect directly on the Earth on polar temperature, the Moon does have a large effect on Earth’s oceans which correlate to have an effect on the Earth’s temperature. The atmosphere is also a fluid. The Moon’s gravitational waves also influence this fluid. As well, the impact of the Moon depends on the perigee and apogee according to NASA. The perigee is when the Moon is closest to the Earth and apogee is when the Moon is farthest away from the Earth. Climate models and paleoclimatic evidence also suggest that the polar regions are responsive to climate forcing.6

Climate forcing pertains to the difference in energy or radiation of the sun's rays absorbed by earth and the energy that is radiated back into space. This has some effect on the temperature of the Earth because of the constantly radiating heats waves traveling through the atmosphere warming it.

This topic has been researched and observed by many people throughout time as early as the 1600’s. The early observations of Isaac Newton guided him to establish his beliefs that there is such thing as Ocean tides caused by the Moon.  Born in 1643 in the UK, for many years Newton researched the movements of celestial objects and provided theories on his observations.7 His famous theory of gravity provided the first suitable description of ocean tides and their long-known correlation with the phases of the moon. His theories have now been validated. Ocean tides are complex; this is caused by the uneven waters, the depth and the presence of land. At the point on the ocean's surface closest to the moon, the lunar gravitational attractive force is strongest and it pulls the ocean toward itself. On the opposite side of Earth, its attractive force is weakest, which allows the ocean to bulge outward again, in this case away from the moon.7 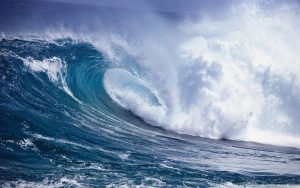 For this segment, we will turn to Pierre-Simon Laplace, as a French scholar whose work was important to the development of mathematics, statistics, physics and astronomy. Born in 1749, for 78 years he had provided the scientific world with extreme accounts of opinions from his years of observations until his death in 1827.8 A century after Newton, Laplace’s theories were later used to predict the existence of atmospheric tides when Laplace developed a theory based on a tidal equation now bearing his name. Laplace's describes the motions of an ocean of uniform depth covering a spherical Earth. Laplace's theory is perfectly applicable to the atmosphere if ocean depth in the tidal equation is replaced by a quantity called equivalent depth, characterizing the extent of the atmosphere above the surface.8

Does the Moon Affect Climate Change?

Recently, global warming has occurred at a rate much higher than typical over the Earth’s history.  Contrast to that, the Moon has been receding at a constant rate of about 4 centimeters per year, and the rate has only increased over geologic time scales.9  The lack of consistency between the Earth’s warming and the Moons receding rate is evidence that the recession of the Moon’s orbit is not a direct factor when considering climate change.

However, recession of the Moon transfers an estimated three terawatts to Earth in the form of energy dissipation by the friction between ocean tides and the Earth.9 It is suggested that nearly 30% of this entire tidal energy system may be distributed in deep oceans that help sustain ocean currents.  Because both deep ocean and surface currents are important drivers for climate change, the recession of the Moon may be an important key to the stability of the climate.9  Even though the Moon may not be directly contributing to global warming, the recession of its orbit may assist in driving climate change over the long term. 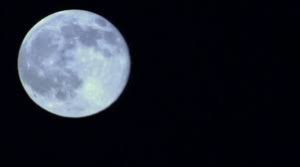 In terms of climate change, it was discovered that in the short term, the moon does not have a major impact.  However, the moon affects the seasons by keeping the earth’s axis at a constant rate which affects our climate.  Storms are intensified by the moon, and tidal waves are impacted from the moon that can change the Earth’s temperature.  The moon may not promptly cause climate change, but it can impact the Earth’s weather systems, and it may impact climate change long term.