As our population continues to grow and Earth becomes overcrowded, Mars is the natural next step in colonization. Due to its similarities and close proximity to our home planet, Mars has been viewed as the best option for the expansion of humanity for many years. Once thought to be a theme of pure science fiction, astronomers have begun researching and planning for the colonization of an area of our Solar System no human has been before. A seemingly desolate planet, the surface of Mars shows little promise for life at first glance, but as recent studies have shown, there may be more there than meets the eye. After taking a closer look at what the Red Planet truly holds, the possibility of colonization has never looked brighter.

Research in recent years has taken an in-depth look at the atmosphere of Mars, both as it was historically and how it has changed to become what it is today.  The spacecraft MAVEN is taking measurements that will help us to understand the evolution of the atmosphere through several different characteristics. The current Martian atmosphere poses one of the biggest problems when it comes to colonization, as it is unsuitable for human life as we know it. The possibility of terraforming, a method to transform the atmosphere and climate of Mars to become more Earth-like, has also become a hot topic in the discussion of colonization and offers some solutions to the current problems facing it.  Even with these obstacles, several plans are being constructed that include preparations for manned missions to Mars and assembling a Martian colony. 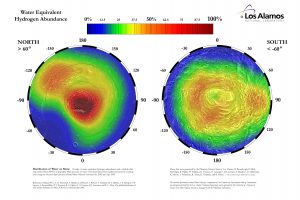 Figure 1 Displays proportion of water ice of the upper and lower 30 degrees of Mars
(https://commons.wikimedia.org/wiki/File:Water_equivalent_hydrogen_abundance_in_the_high_latitudes_of_Mars.jpg)

At surface level, Earth and Mars do not seem to have much in common, but when compared to the great variability of all the planets in our solar system, they begin to look very similar.  The two planets have similar length of days, with a Martian day lasting 24 hours and 40 minutes.  Mars also has a similar axial tilt to that of Earth’s, which means it experiences seasons much like we are used to.1

NASA has confirmed that water is available on the surface of Mars, making it one of the only other places that share this in common with our home planet.2 Most of the water on Mars today is either frozen in polar ice caps or underground, but evidence suggests that water once flooded the planet’s surface in liquid form, making it humid and hospitable.3

The atmosphere of Mars consists of:

The atmosphere of Mars poses one of the largest problems in the future of colonization.  It is extremely thin; about 100 times thinner than our atmosphere on Earth with no breathable air. Humans require between 19.5% and 23.5% oxygen in the atmosphere for optimal breathing, while the recommended maximum concentration of carbon dioxide by the U.S. EPA is below 0.1%, but Mars has an atmospheric composition of 95.32% carbon dioxide.5 With the air pressure being so
low, water at body temperature would boil.5 Current research suggests that the atmosphere is too thin to support any kind of human life, but just thick enough to still exhibit weather, clouds and winds.4 Gigantic red dust storms are common on Mars and because of the iron-rich rusty soil, it is commonly known as the “Red Planet”. These storms can cover the entire planet and last for months, making them the largest dust storms in the solar system, creating an undesirable environment on the surface of Mars.4

Table 1. Summarizing the similarities and differences in several features of Earth and Mars. (http://www.universetoday.com/22603/mars-compared-to-earth/)

Mars exists within our Sun’s habitable zone, acting as the last stepping stone to what lies beyond.6 Although it is within this zone and closer to the Sun than the outer planets, it is much colder than Earth, with average temperatures of -60 Celsius, varying from -125 Celsius near the poles during winter to a warm 20 Celsius at midday near the equator. Sometimes it even snows on Mars, but instead of snow produced from water, they are carbon dioxide snowflakes about the size of red blood cells. The north and south poles of Mars are capped with ice much like Earth, but certain portions are predominantly made from frozen carbon dioxide.7

How Do We Observe Mars? 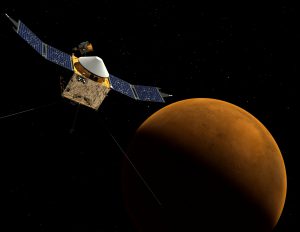 MAVEN (Mars Atmosphere and Volatile EvolutioN) is a space probe placed in orbit with Mars that was developed to study the remains of the Martian atmosphere.

NASA’s latest probe, which has been on mission since November 2013, might be the most crucial yet in investigating the history of the Red Planet and foreseeing the future of life and colonization on Mars.

MAVEN reached its destination in September 2014, with the ultimate goal of exploring the planet’s upper atmosphere, ionosphere, and interactions with the Sun and solar wind.8 The spacecraft will collect data using eight different instruments and will examine the loss of volatile compounds such as carbon dioxide, nitrogen gas, and gaseous water from the Martian atmosphere to space.9 Understanding atmospheric loss will give scientists insight into the history of Mars’ atmosphere and climate, liquid water, and planetary habitability.8

The MAVEN probe is still gathering data and the final results have not yet been compiled. After the completion of the project, we should have a better understanding of the structure and composition of the Martian upper atmosphere and the processes controlling them; finding out what gases are escaping the atmosphere and how they escape, giving us more information about the possibility of colonization.

Evidence strongly suggests that Mars previously had a warm and wet climate, caused by the thick CO2 atmosphere it once possessed and a strong greenhouse effect. Although the planet is now dry and desolate, it could be possible to make Mars habitable again in the future through the use of advanced technology. This would include changing the atmospheric composition over time, making both the climate and geology of the planet more familiar to humans.

Several methods for creating a new atmosphere and warming the planet have been proposed. The first method would be to use large orbital mirrors or other power sources to reflect the sun’s radiation towards selected areas of the planet, such as the southern polar ice cap, creating an artificial greenhouse effect, trapping the Sun’s heat within the atmosphere and warming the surface.10 When released, the estimated amount of CO2 frozen at the southern ice cap and adsorbed into the soil would be sufficient to thicken the atmosphere, causing the atmospheric pressure to reach about 30% that of Earth.11

Figure 3. Artist’s concept of the process of terraforming Mars
(https://en.wikipedia.org/wiki/File:MarsTransition.jpg)

A second proposed method of terraforming is to build greenhouse gas-producing factories on the surface of Mars to trap solar radiation, therefore causing an effect that many people here on earth are familiar with; global warming. This same heating effect could be produced on Mars by setting up several factories with the sole purpose of producing CFC’s, methane, carbon dioxide and other greenhouse gases into the atmosphere.10

Importing ammonia ices from objects from the outer regions of the solar system, such as comets and asteroids, and impacting them on the surface of Mars also appears to be a promising method of terraforming. Ammonia is a powerful greenhouse gas, and when introduced into the Martian atmosphere, it would create the required greenhouse effect to thicken the atmosphere and raise the global temperature.12 Also, because ammonia is mostly nitrogen by weight, when it combines with oxygen gas it would create a potentially breathable atmosphere for humans.12

This third proposed method also addresses the most technologically challenging aspect of terraforming Mars; the creation of sufficient oxygen in the planet’s atmosphere in order to sustain animal life.  More recent proposals include the creation of sealed biodomes on the surface containing colonies of oxygen-producing cyanobacteria and algae. If proved successful, NASA intends to create several of these in order to harvest oxygen for future human missions to Mars, reducing the amount of oxygen that needs to be transported.12

The prospect of terraforming Mars comes with many difficulties.  Copious amounts of resources are required, the time factor is an unfortunate reality, and there is the concern that any undertaking on an unknown planet will have unintended consequences.12 Even with these potential complications, terraforming Mars is still not impossible but an already large and difficult task may prove itself to be even more demanding than previously thought. 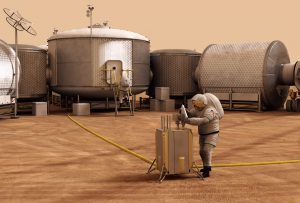 Several organizations have proposed manned missions and plans to establish colonies on Mars in the near future.  Dutch entrepreneurs revealed MarsOne in 2012, a plan that calls for multiple one-way missions to establish a permanent and expanding colony on Mars. Set to begin in 2023, the plan also includes a telecom orbiter to be sent by 2018, a rover in 2020, followed by base components and settlers in 2023.  The first crew of 4 astronauts are planned to land on Mars in 2025; followed by a new crew of 4 members every two years.13

Tesla CEO and SpaceX founder, Elon Musk, unveiled plans to establish a colony on Mars with a population of 80,000 people. SpaceX’s plans rely on the development of the Mars Colonial Transporter (MCT), a space travel system that is unlike any other due to its unique ability to reuse its rocket engines. In September of 2016, Musk announced successful tests of the Raptor rocket engine for the MCT.14

NASA also has plans for a manned mission to Mars in the 2030’s using the Orion Multi-Purpose Crew Vehicle (MPCV) and Space Launch System (SLS). This mission is not only intended to send humans to the Red Planet but to also aid in more ambitious exploration from federal space agencies and nonprofit organizations. The European Space Agency (ESA) and Roscosmos (Russian Federal Space Agency) both are planning manned missions and are collectively participating in Mars-500.  This is a cooperative project preparing astronauts both mentally and physically for long exploration missions.13

Mars looks like the best possible option for colonization, due to it being in the habitable zone and having similar day lengths to Earth. However, Mars’ atmosphere is going to be a major hurdle as it is extremely thin, which causes water at body temperature to boil. It also has an extremely low level of oxygen and high levels of carbon dioxide which would make it a harsh environment for humans to breathe in. In combination with the extreme cold, the massive dust storms, and the task of getting everything we need to the planet’s surface, Mars is going to be extremely difficult to colonize.

Plans to colonize Mars are still ongoing, despite the possible hurdles these organizations may encounter. To make the transition from Earth to Mars easier for humans, several methods to terraform the planet are being proposed.  The future challenges that have been uncovered while planning for both terraforming and colonization on the Red Planet are daunting, but the innovative minds behind these projects have a positive outlook. As technology continues to advance and breakthroughs are made, the dream of one day converting from Earth dwellers to Martians may just become a reality.