The night sky has fascinated humans on Earth for centuries. What, and possibly who, is living in the black abyss has continued to puzzle generations of scientists. There are endless hypotheses of how the solar system was created and how it functions. However, the only way to test those theories is to explore the diverse and unknown territory beyond Earth. As technology advanced, humans began to explore outer space which strengthened our knowledge of the solar system. Since the evolution of man we learnt to understand our history. From early ages of discovering the universe around us we adapted to new techniques. One particular mission caught the attention of many by attempting to solve the mysteries of comets and how life on Earth began. This mission was named the Rosetta Mission. The Rosetta Mission has taught us what we know about comets and in particular Comet 67P/Churyumov-Gerasimenko.

Comets have intrigued the minds of many for the last few centuries. The mystery of what lies beyond Earth is being solved one step at a time by missions such as the Rosetta Mission. Comets are unique because they are a mix of icy matter and dust, so we want to know how the sun can alter the characteristics of these icy objects. The Rosetta Mission was one of the first missions to explore the surface of a comet by exploring Comet 67P/Churyumov-Gerasimenko. In this paper, we first discuss the history of the Rosetta mission followed by the instruments used by the Orbiter to collect and analyze the comets make up. Next, we’ll look at the history of  Comet 67P/Churyumov-Gerasimenko and how it started out in the Kuiper Belt but later fell to the Jupiter-family. Lastly, we’ll touch on Philae’s historic landing on Comet 67P/Churyumov-Gerasimenko and it’s final contact.

History of the Rosetta Mission

The purpose of the Rosetta Mission was to unravel the mysteries of the evolution of the solar system. Scientists anticipated this would include information about the origins of comets and their physical characteristics1 . Also, to confirm the major role comets were thought to have in the formation of planets2 . Comets were hypothesized to have brought water and complex organic molecules to Earth and other planets. This mission’s distinctive proposal was to land on a specific comet to observe the changes as it approaches the Sun3. This outline made it a pioneering mission. The Rosetta mission and its findings were an important step towards our pursuit to understand the solar system.

The Instruments of the Rosetta Orbiter

The many great discoveries made by the Rosetta Mission were thanks to the Rosetta Orbiter. The Spacecraft is an aluminum box made up of 11 main instruments which allow it to monitor and analyze objects in our solar system. First the Ultraviolet imaging spectrometer (ALICE) provides information about the exterior makeup of the comet by measuring the amount of water and carbon monoxide/dioxide that the comet is producing. Next there is the Comet Nucleus Sounding Experiment by Radiowave Transmission (CONSERT) which studies the interior of the comet by analyzing the comets radio waves. The Cometary Secondary Ion Mass Analyser (COSIMA) takes dust particles that have been released through the process of outgassing and analyses them. The mass, momentum, velocity and amount of dust particles coming from the nucleus is all measured by the Grain Impact Analyser and Dust Accumulator (GIADA). Particle population, size, volume, 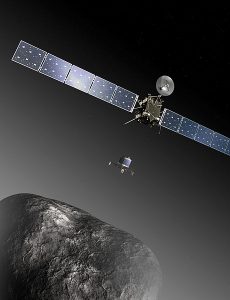 and shape is all given by the Micro-Imaging Dust Analysis System (MIDAS), which is responsible for analyzing the dust environment surrounding the comet. The Microwave Instrument for the Rosetta Orbiter indicates the surface outgassing rate and the subsurface temperature of the comet’s nucleus. Optical, Spectroscopy and Infrared Remote Imaging (OSIRIS) is a combination of a wide-angle and a narrow-angle camera that takes high resolution pictures of the nucleus. Two sensors, known as the Rosetta Orbiter Spectrometer for Ion and Neutral Analysis (ROSINA), determine what the atmosphere and ionosphere around the comet is made up of. Rosetta Plasma Consortium (RPC) is five sensors that study the physical characteristics of the nucleus. These sensors also monitor the activity among comets and solar wind. To calculate the density and structure of the comet, the Radio Science Investigation (RST) uses frequency shifts in the orbiter’s radio signals and measures the mass and gravity of that comet. The 11th, and final instrument is the Visible and Infrared Thermal Imaging Spectrometer (VIRTIS) and its job is to map the nature of the solid object and determine the exterior temperature of the nucleus4. Along with these instruments, two enormous solar panel “wings” extend from either side of the orbiter to collect sunlight.

The most important findings of the Rosetta Mission was Comet 67P/Churyumov-Gerasimenko. The comet was an inadvertent discovery made in 1969 by Klim Churyumov who was studying an underdeveloped photographic plate taken by Svetlana Gerasimenko, hence how the comet got its name5. The astronomers made the accidental discovery while studying a different comet, comet 32P/Comas Solà. We now know that the comet measures 3 x 5 km across in size, has a mean diameter of 4km and orbits the sun roughly ever  6.45 years6. The comet is impossible to find with the naked eye and even basic telescopes, however it has been found through the Hubble Space Telescope multiple times. 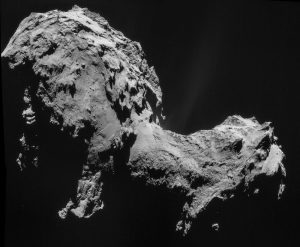 Comet 67P/Churyumov-Gerasimenko is said to have originated in the Kuiper Belt and it is made up of carbon based molecules and inorganic minerals, like silicates. We know this thanks to the Rosetta Mission and its COSIMA instrument, which collected data from over 35,000 dust particles that were given off of the comet7. As comets get closer to the sun, solar energy heats the nucleus, causing it to emit gas and sometimes even dust particles, a process called outgassing.  The Kuiper Belt  and the Asteroid Belt share many different characteristics, but the main different is that the Kuiper Belt  is much larger in size. It is located about 30 astronomical units (AU) to 50 astronomical units (AU) away from the sun, reaching past Neptune’s orbit8 (shown in figure 3). Being that the Kuiper Belt is located so far away from the sun, it is made up of thousands of ices, which are comprised of methane, ammonia, and water ice. Instead of being a classic mixture of rock and metal, these objects are more like a frozen mass9. Comets from the Kuiper Belt are short period comets; they have orbital periods that are less than 200 years. Along with Comet 67P/Churyumov-Gerasimenko, the Kuiper Belt consists of many other large discoveries like dwarf planets Pluto and Makemake (2005 FY9)10. Anything orbiting within the Kuiper Belt is said to be a Kuiper Belt Object (KBO).

Jupiter-family comets are also consider short-period comets and almost all of them are thought to have originated in the Kuiper Belt. Comets in the Jupiter-family are said to be “active” comets, meaning their nucleus is approaching the sun and warming up11.  There orbits are controlled by the gravitational pull of Jupiter. Short-period comets are also called periodic comets because they make regular rotations through the inner solar system. In 1840, while Comet 67P/Churyumov-Gerasimenko was orbiting through the inner solar system, it had a close encounter with Jupiter, the largest planet, which bumped it closer to the sun. The initial gravitational pull off Neptune slowly pulls comets in the Kuiper Belt closer to the inner solar system, eventually the comet will have a run in with Jupiter, like Comet 67P/Churyumov-Gerasimenko12.

Philae was able to make these great discoveries due to 5 main instruments that made up the space lander. The Alpha X-ray Spectrometer (APXS) is a device that can be lowered 4cm into the land to detect alpha particles. The information gathered from the APXS grants researchers information to the comets composition. Sic micro-cameras, called the CIVA, take pictures of the surface of the comet to later analyze the physical characteristics of the comet. The density and temperature of the comet is monitored using the Multi-Purpose Sensors for Surface and Subsurface Science (MUPUS). Sensors are attached to Philae’s anchor and exterior body to accurately collect this data. The Rosetta Lander Imaging System (ROLIS) is another type of  camera that takes high resolution images. This instrument however, captures images on the lander’s descent towards the comet. Lastly, the Sample and Distribution Device (SD2) collects samples of the comet by drilling 20cm into the ground and collecting chunks. These small bits of the comet are then in different ovens to be examined18.

Figure 4 – The Kuiper Belt is larger than the Asteroid Belt and is home to many well known objects like Comet 67P/Churyumov-Gerasimenko and Pluto Source:https://commons.wikimedia.org/wiki/File:Sonnestelsel.png

The European Space Agency’s Rosetta mission ended on September 30, 2016 when the spacecraft lost its solar power due to its distance from the sun. It was confirmed by the ESA that Rosetta died on a Friday at around 4 20 a.m..19 According to NASA’s associate administrator Geoff Yoder the Rosetta Mission was a “magnificent demonstration of what excellent mission design, execution, and international collaboration can achieve”20.

With an accomplishment that ended dramatically NASA and other Space Agencies are now satisfied with Rosetta’s findings of the comet 67P/Churyumov-Gerasimenko measurements of gas and analyzing images of the comet’s nucleus.21

The Rosetta Mission was the first of its kind in comet exploration. The mission examined the many questions scientists had about comets such as the changes that occur as they travel close to the Sun, what they are composed of and their role in the formation of planets. The mission used cutting-edge technology to ensure precise and clear data. The choice in comet to study was crucial for the success of the mission. Comet 67P/Churyumov-Gerasimenko with its longer orbit and smaller size made the conditions more suitable for the mission. The findings of organic compounds and elements on Comet 67P/Churyumov-Gerasimenko until the final day of the project, September 30 2016, supported the hypothesis that comets brought what was needed to establish life to Earth. The pivotal discoveries made about comets and the solar system are a result of the brilliant minds and contemporary equipment behind the Rosetta Mission. This revolutionary exploration has inspired many scientists in further space exploration.