One solution to improving the world’s food security is the development of genetically modified foods. Farmers have long bred plants to produce hybrids with traits that can withstand drought, excessive heat, excessive moisture, or to improve yields and nutritional values for example. GM food is also touted as being more environmentally friendly by some because they require fewer chemicals, less water, and are better for the soil. Today, much of the research and development is carried out by universities, governments, non-governmental bodies, and industry, most of which occurs in laboratories. Furthermore, some of this work involves genetic modifications that introduce traits into foods to achieve specific goals. One recent example of genetic modifications includes Arctic® Apples. Genes in the apple were modified to prevent browning. The result is a more aesthetically pleasing food and less waste.

Another example is golden rice. The golden rice project addressed nutrient deficiencies caused when people don’t get enough iron, vitamin A, iodine and zinc. Vitamin A deficiency (VAD) is serious and leads to a range of illnesses that largely affect pregnant women and children, many of whom live in countries where people eat rice as a staple. Modifying rice to provide vitamin A is predicted to reduce mortality and lead to substantial gains in health, but can be done only through genetic modification.

While this seems like a fairly innocuous issue, environmental and anti-globalization activists that are dead set against genetic modifications to food have vehemently opposed golden rice and genetic modifications in other foods (see Wesseler & Zilberman 2014; Harmon 2013). While there are no known links to adverse health or environmental problems related to GM food, some individuals and groups suggest that we don’t have enough information yet to make informed decisions. Economically, this has negatively affected trade (e.g. the European Union bans the imports of GM foods in many countries), and the wellbeing of farmers (e.g. visit EcoWatch to read about the ban of GM seeds in Kenya and the controversy surrounding a potential lifting of the ban).

The debate about GM foods is often intense and heated on both sides. Those who support the development, commercialization and adoption of GM foods suggest that yields will rise, the nutritional quality of food will improve, and that food waste will decrease. There are strong social and environmental arguments to support the use of GM foods as well: human health and wellbeing will be enhanced; there will be gains for labourers, who will pick fewer weeds; and there will be environmental benefits derived from better water and soil conservation, and lower chemical use. To gain a better perspective on both sides of the issue, and how to balance the pros and cons, read the article from the Cornell Alliance for Science pictured in Figure 10-3. 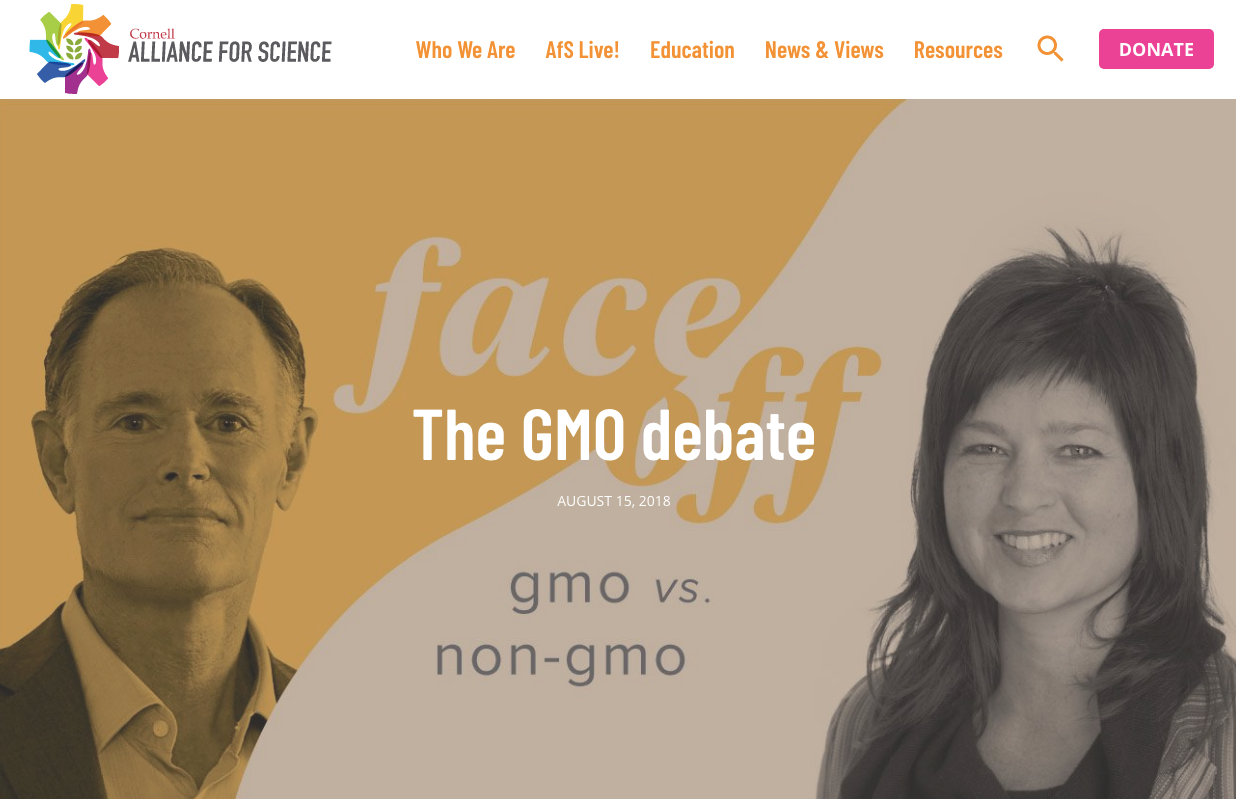 Figure 10-3: The debate about GMOs in our food - how do we strike a balance? ? Source: https://allianceforscience.cornell.edu/blog/2018/08/the-gmo-debate/ Permission: This material has been reproduced in accordance with the University of Saskatchewan interpretation of Sec.30.04 of the Copyright Act.

Before we move on to the next topic, let’s look at applying some of the theories we discussed up to this module. First, we could describe the increase in yield and how this increases supply (a key argument for adopting GM food). Figure 10-4 shows how the production function might change as a result of enhanced genetic technology for cereal.

The left panel shows the original total product (TP0) for cereal and the increased product (TP1) as a result of genetic engineering. The result is the increased yield for each level of input. We could go through each step to assess the costs and revenues to eventually arrive at the market supply (or marginal cost curve). Increased yield means lower marginal cost, or higher supply depending on how you want to look at it. Either way, the result is a shift in the supply curve to the right. Given our demand curve, this means decreased price, and increased quantity demanded. The economic arguments are clear, and we can also see that lower food prices are socially beneficial, especially in regions where lower-income families spend a greater proportion of their income on food.

Now let’s take a look at an economic argument against GM foods. Environmental groups have long said that GM foods have not been fully tested and could have negative effects on the environment and human health, for example. Greenpeace is one such group that suggests genetic organisms can damage the natural integrity of the environment, and that people have a right to know what’s in their food but don’t because such foods are not labelled. This sounds like two examples of market failure from Module 9. Not having food labelled could be a case of information asymmetry. And, if genetic materials do contaminate natural processes and organisms in a negative way, we could think of this as an externality: a case where the social costs of producing such foods are higher than the private costs.

These two arguments have resulted in demand for governments to not only label foods that contain GM ingredients, but to regulate and ban the products of technologies to safeguard society.

Where do you see yourself on this issue? To answer this question, you will have to consider the costs and benefits of GM production and consumption, the risks (if any), and what the social and ethical implications are.