Let’s add more information to our analysis.  First, think about all the things you might have to pay for as inputs in the production process. You might come from a dairy farm, or you might be a poultry producer or a hog producer.  What are the costs of production related to those businesses?  We can list each cost, but we can simplify this a little bit by looking at the types of costs.  There are three categories: fixed, variable and sunk.

Fixed costs are fixed over production: they remain constant regardless of how much is produced.  Using a personal example to illustrate the point, if you pay rent for an apartment and you decide to go home for the weekend or stay with a friend, you must still pay the full amount of rent to the landlord/lady regardless of the fact that you didn’t spend the night (or several nights) in the apartment.  That cost is fixed on a monthly basis.

Variable costs vary with production.  This means that the more of an input you use, the more you have to pay.  And, if you use zero input, you don’t pay anything at all.  Variable costs would include labour (the more people you hire, the more people you must pay), fertilizer, seed, herbicide, baking ingredients, feed, etc.  Personal variable costs are costs that vary with use.  For example, a cell phone plan that charges for each text you send would make texting more expensive the more you texted.  Water use in your home is partly variable because there is a water metre: the more you use, the higher your bill.

Sunk costs are costs that occurred in the past, and cannot be recovered.  Today, as I write this I am considering some options for travel.  I would like to cancel a trip I booked because I don’t have time to go, but I cannot get a refund on the hotel I booked and I must forfeit $300 of the airfare I’ve already paid.  My decision is whether to go on the trip or not.  In this case, the costs I cannot recover should not enter into my decision whether to go because they are sunk.  I am out that money regardless of the decision I make.

List one cost of production for any agricultural product you can think of.

And now back to our willow example.  We will assume all inputs not being used are fixed at a cost of $40/ha.  We must pay this regardless of how much we produce, even if that amount is zero.  Our only variable cost will be for fertilizer.  In our example, the cost of fertilizer is $10.20/kg. We already have enough information to determine the full cost of our production decisions. 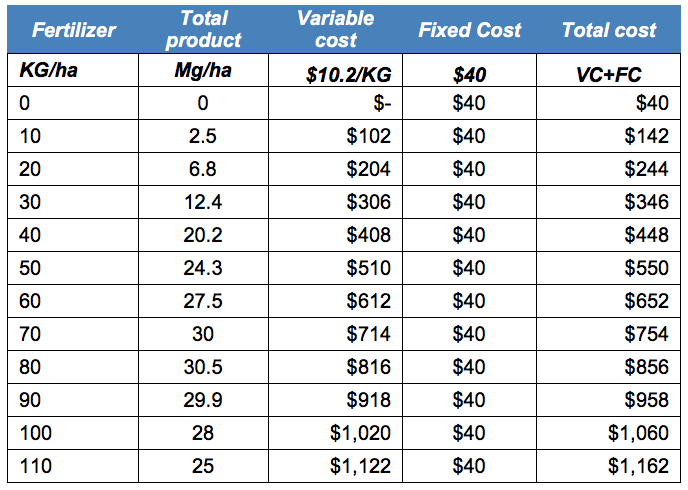 We can also map this relationship to see how costs are associated with the output we produce.  Take note of the difference in axes.  The cost curves map quantity produced (kg/ha of willow) on the x-axis, and costs in dollars ($) on the y-axis.  This differs from the production graph, which mapped input on the y-axis and output on the x-axis. 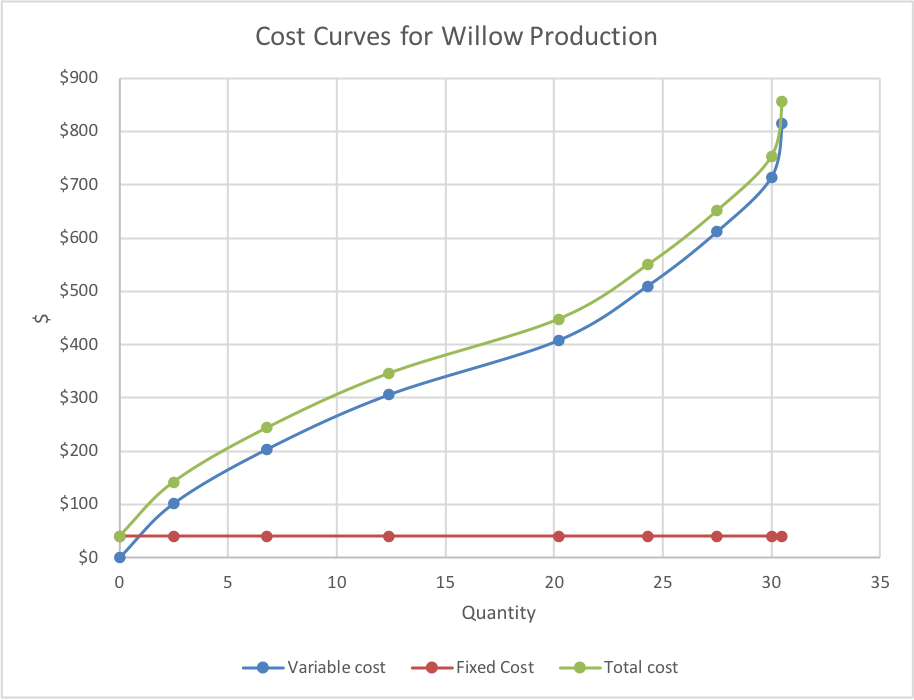 Figure 5-4: Total cost of willow production. Fixed cost is flat (it doesn’t change over production). Variable cost increases as we produce more products. Total cost also increases because variable cost is increasing. Note: the graph does not include points beyond the maximum quantity produced. Permission: Courtesy of course author Hayley Hesseln, Department of Agriculture and Resource Economics, University of Saskatchewan.

The cost curves above show fixed cost in red, which doesn’t change over production.  The variable cost is illustrated in blue.  Adding the two together results in total cost, illustrated in green.

You’ll also notice that the total cost starts to fall after the maximum amount of production.  Typically a producer will not combine resources in such a way that continues to increase costs when production starts to fall.  In the future, we will truncate these graphs before the total product starts to decrease because we are really only interested in the range over which a producer can make money.

We now have two pieces of the economic puzzle. We know how production changes over input, and we know how our costs change as we use more of that input.  But we don’t yet have enough information to make an informed production decision. Next, we will introduce our last piece of the puzzle – price.