A growing population means a growing demand for food – people have to eat. The question is, can the agriculture industry keep pace with population growth? This has been an age-old question: one that has often been answered pessimistically. Remember Thomas Malthus? He was an economist back in the 1700s that observed that human populations grow at exponential rates whereas food supply grows arithmetically. In a nutshell, his observations pointed to the inevitable fact that we would all starve to death. His outlook was bleak but didn’t pan out. What happened was that innovation outpaced population growth and society was able to produce increasingly more food. Population growth is now back on the agenda – see Figure 10-1. 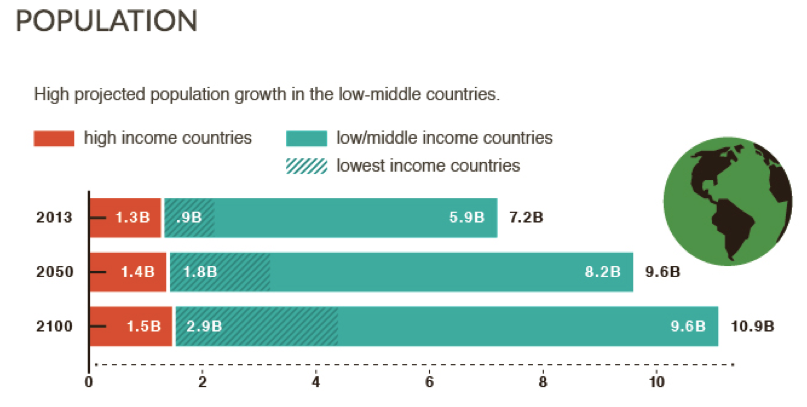 Figure 10-1: What does population growth mean for agriculture? Visit CCAFS and look at the “Big FACTS”. Source: https://ccafs.cgiar.org/bigfacts/#theme=food-security&subtheme=population Permission: This material has been reproduced in accordance with the University of Saskatchewan interpretation of Sec.30.04 of the Copyright Act.

Can society continue to grow at this pace? What will happen to the demand for food if it does? Economically, we could look at the market for food in general and describe the expected changes using a market framework (Figure 10-2.) 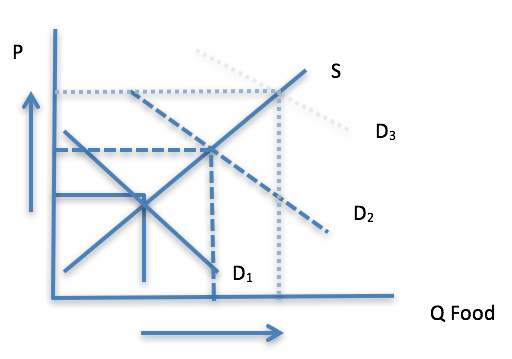 D1 represents demand today where the population is just over 7B people. An exogenous shock (increasing population) will shift the demand curve to the right. D2 might represent 9.6B people as predicted by 2050. Continuing along this trajectory, we could even imagine D3 by the year 2100.

What can you say about expected food prices and the increase in quantity supplied? Prices will certainly rise given an upward-sloping supply curve, which could lead to concerns about food affordability for lower-income groups. Quantity supplied will also have to rise to meet new demand (movement along the supply curve). But, will the supply remain the same, or can we expect it to shift as a result of innovation? Another way of stating the same question is to ask if technological improvement at all points along the supply chain will continue to ensure growing food availability, thus keeping costs down. Or, will climate change adversely affect worldwide growing conditions resulting in falling food production and further increases in price? Using the market framework above, you could explore different scenarios and test different hypotheses.

Research done by a group known as CCAFS – Climate Change, Agriculture and Food Security, suggests that population growth will be the greatest in the lesser-developed countries where people spend a greater proportion of their income on food. The group also points out the large amounts of food that is wasted every year.

The problem of food security can be dealt with in a number of ways – economically, by changing production, supply, and demand, through continued improvements in science, better food distribution networks, stronger social programs that ensure food is delivered to those who need it… the list goes on. If you decide to debate the issue, you should answer the question posed in the section header by answering either YES or NO and providing justification using economic theory with expanded arguments around SPLEEEMR. Consider what food security means, how much food we waste, and what trade-offs will be required to meet future nutritional needs.