The answer is, lots! The position and slope of the curve provide information as does price and quantity and the areas under the curves. Let’s start with something you are already familiar with – total revenue. We know from a former module that price multiplied by quantity gives us revenue. Looking at Figure 7-4 below, you can see the same is true – TR is the area of the shaded rectangle. 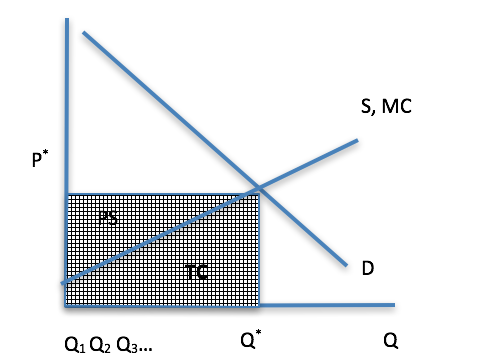 The hashed area represents total revenue, which is a transfer of money from the consumers who purchased Q* goods at price P*. But we know that not all the money is profit. Producers had to incur costs to produce those goods, and we can read that from the supply curve, also known as marginal cost.

That leaves only one small shaded area not accounted for – the area above the MC curve. We can calculate that as TR – TC = Producer surplus. When we calculated break-even analysis, we called this value, “profit.” It is in fact profit, also known as “rent,” and producer surplus that accrues to the producer for his or her entrepreneurial talents.

Source: http://www.usnews.com/news/us/articles/2013/01/12/with-almonds-rising-revenues-land-values-soar Permission: This material has been reproduced in accordance with the University of Saskatchewan interpretation of Sec.30.04 of the Copyright Act.

To see why this is important consider the almond market! While this article is a bit older, it captures the importance of revenue.

“Revenues for almonds and walnuts increased by 30 percent between 2010 and 2011, and revenues for grapes rose by 20 percent, according to the USDA. California's agricultural exports during that time grew by more than $3 billion” (Wozniacka, 2013).

The price of nuts in California was increasing quite rapidly in 2013. This was great news for producers because it was due to increase demand. How does this look in terms of changes in the market? The article suggests that people in India and China with new income to spend were the leading case. We know this is an exogenous factor that affects the demand curve, causing it to shift to the right. 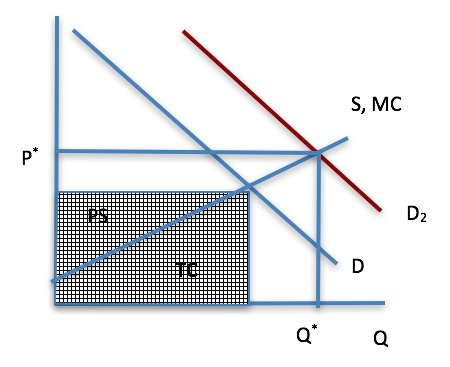 The shift of the demand curve to the right results in higher prices and higher quantity traded in the market. You can see that total cost would increase because there’s more area under the MC cure, but you can also see TR would increase resulting in greater producer surplus. The article goes on to discuss land values – because the value of the crop has gone up, so too has the value of the land.