The last section taught us that there are winners and losers when it comes to trade: sometimes, domestic consumers pay more, and sometimes, domestic producers face competition from foreign producers and are squeezed out of business. Overall, the net gains from trade are positive. The model we looked at above is strictly economic and doesn’t consider many “real world” issues that can tip the balance one way or the other. The analysis looked at purely free trade without considering issues such as protectionism; non-tariff barriers, tariffs, or quotas that affect the costs of production. We will cover each of these issues in turn.

Trade deals are often negotiated between countries where interest groups who stand to gain or lose lobby political parties to ensure a favourable outcome. Trade policy (the rules and regulations regarding trade) is concerned with the winners and losers. Furthermore, you are likely to see policy that reflects decisions to support local producers. Canada’s authority on trade in agricultural produces is Agriculture and Agri-Food Canada (AAFC). The website discusses goals to “improve and secure market access” and to “achieve a more level playing field” in international markets. Click on Figure 9-7 to read more.

Figure 9-7: Canada's authority on trade in agricultural products. Source: http://www.agr.gc.ca/eng/industry-markets-and-trade/agri-food-trade-policy/?id=1383918945146 Permission: This material has been reproduced in accordance with the University of Saskatchewan interpretation of Sec.30.04 of the Copyright Act.

What does “improve and secure market access,” mean? Economic growth occurs through an expansion in demand, and we know that access to new populations and markets will be better for producers. Exporting Canada’s agricultural products leads to significant gains for farmers because Canada has a comparative advantage in producing raw materials (grains, pulses, meat, animal feed, etc.).

The second bit about a “level playing field” has to do with situations where trade is not free. In many cases, goods coming into a country are taxed to make them competitive with locally produced goods. This helps local producers compete, but at the same time takes away the gains from trade by significantly hurting consumers of those goods. There is a long-standing trade war between the United States and Canada on softwood lumber. While Canada has a significant comparative advantage, the US has claimed for years that Canada is not trading fairly and charges fees on all Canadian softwood entering the US.

We’ve already looked at the model for free trade, which occurs when governments allow goods and services to move across borders freely without tariffs, quotas or any other restrictions. While this is highly desirable on paper, it doesn’t necessarily work out in the real world. For example, consider a situation where the energy produced in a country that does recognize or support basic human rights or environmental protection is allowed into Canada. The cost of the foreign energy will be very low as will be the price because labour was exploited and the environment poisoned from poor mining practices – in other words, there will be externalities that make the price artificially low as a result of human and environmental costs. Trade authorities could ban the import of the product but would likely impose a tariff – also known as a tax or duty – to bring the price up to the domestic energy price or make it even higher so it is not competitive with domestic energy. Here’s how it works: 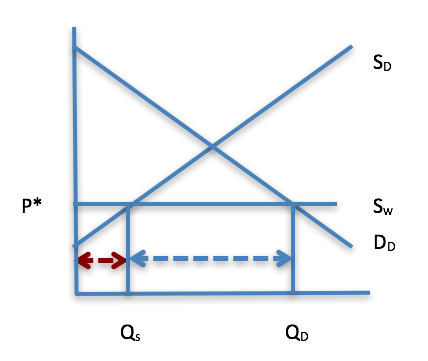 If the government implements a tariff (Figure 9-9), the price will rise to P1, which is reflected by the new world supply (Sw + tariff), which is the marginal cost plus the added cost of the tariff. 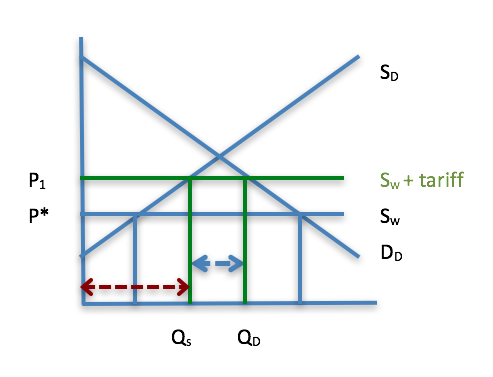 Figure 9-9: Equilibrium with imports - and a tariff. Permission: Courtesy of course author Hayley Hesseln, Department of Agriculture and Resource Economics, University of Saskatchewan.

You can see that domestic production increases (the red arrow is longer), and imports fall (shorter blue arrow) resulting in higher prices and lower quantity demanded by consumers. The tariff serves to help domestic producers but hurts domestic consumers.

What happens to the area that represents the gains from trade?

In some cases, tariffs and duties help to deal with unfair trade practices and production or to protect a young industry just long enough to get on its feet, whereas other times, it is merely protectionist. While not an agriculture product, I purchased a winter parka from L.L. Bean, which is located in Maine in the US. Thinking that the final price would be the price quoted on the Internet site (plus Canadian tax of course – can’t escape that), I ordered it. Also knowing about NAFTA – the North American Free Trade Agreement – I expected no mystery fees and that I could “import” this parka freely.

However, I was unhappy to discover that when UPS showed up, the Canadian government had imposed an additional 25% duty! This certainly lowered my consumer surplus considerably! And what was the reason for the hefty fees? I can only speculate that it was to protect Canadian clothing manufacturers who do not have a comparative advantage due to high labour costs. The “F” in NAFTA clearly does not mean “Free.” Just sayin’…

OK, now that my rant is over… let’s look at other clever ways of restricting the entry of goods into Canadian markets. Another way to prevent foreign goods from entering a domestic market is to implement non-tariff barriers. These are any rules or regulations that the exporting country must meet before its products are permitted for sale in the domestic country. There are many such barriers, which can include quotas, customs delays, health and safety restrictions, sanctions, levies and other restrictions to prevent trade.

Protectionism occurs when governments impose rules and regulations merely to protect domestic producers, often at the expense of domestic consumers. This is where powerful lobby groups are able to influence government decisions. As a group, farmers and other producers are able to offer strong incentives (votes, campaign contributions) for government officials if such officials make decisions in the producers’ favour. Consumers who stand to lose only a few dollars here and there as a result of higher prices don’t have the power or the incentive to pay lobbyists to fight for lower prices through policy

In Canada, the dairy industry, poultry producers and other groups have very strongly influenced trade policy. As a result, Canadians pay much greater prices for dairy products, eggs, chickens and other poultry.

Let’s take a closer look at Canadian trade policy concerning eggs. Global Affairs Canada posted a notice to importers on its website (see Figure 9-7, and visit the link). Not only are eggs controlled there is both a quota and a tariff. The egg trade is definitely not free.

Lobby groups are not limited to agriculture. The move to reduce duties and tariffs has implications for which country will produce what type of good, and as we explored, there are always winners and losers associated with trade. When the North American Free Trade Agreement was being negotiated among Canada, the US, and Mexico, an American presidential candidate named Ross Perot was very much against the deal. “A giant sucking sound” is what he used to refer to as jobs being sucked out of the US as corporations increased manufacturing in Mexico where labour costs were cheaper.

Figure 9-10: Global Affairs Canada - notice to foreign egg producers. Source: http://www.international.gc.ca/controls-controles/prod/agri/eggs-oeufs/notices-avis/887.aspx?lang=eng Permission: This material has been reproduced in accordance with the University of Saskatchewan interpretation of Sec.30.04 of the Copyright Act.

If you are an American egg producer, you must heed the following advice:

For a long list of controlled substances visit Global Affairs Canada. Some items you find won’t be a surprise to you (firearms for example), others might be (margarine). And for an even longer list of fees assessed at the border, check out the 1,470-page manual put out by the Canadian Border Services Agency.

Another form of non-tariff barrier has to do with regulatory approval or health. If you are a student destined for animal sciences, you will likely find many veterinary products that have been approved in the US and other countries are not permitted into Canada. The same is true for human pharmaceuticals. Again, this could be the protectionism of Canadian drug manufacturers, or it could really be to protect animal and human health and welfare. Sometimes it’s difficult to determine.

Yet another agricultural example is GMO foods (See Figure 9-11). There is an outright ban in many countries to prevent products that have been genetically altered to grace the grocery shelves.

Figure 9-11: Countries and regions that have banned GMOs. Source: https://gmowatch.com/where-are-gmos-banned Permission: This material has been reproduced in accordance with the University of Saskatchewan interpretation of Sec.30.04 of the Copyright Act.

This considerably changes how countries trade and can have significant effects, often negative, on the welfare of people in lesser-developed countries who would benefit from better strains of plants. Click on the link to see the long list of countries that have banned GMOs.