Climate change and potential solutions to this problem rank very highly on national and international political stages.  Scientifically speaking, as increasingly more greenhouse gases (GHGs) are emitted into the atmosphere as a result of economic development and growth, the Earth’s average surface temperature could increase beyond historic highs.  The results are predicted to be dire and include the melting of ice caps, rises in sea levels and subsequent flooding, desertification, and threats to biodiversity and human lives and livelihoods.

So what’s agriculture got to do with it? Stephen Russell at the World Resources Institute (2014) explains that 13% of total global emissions came from the agriculture sector in 2011, which was second only to the energy sector.  GHG emissions include methane (MH4), nitrous oxide (NO2), and carbon dioxide (CO2), which are produced as a result of raising livestock and crops.  The majority of emissions come from animal production, animal waste and manure management, fertilizer use, and crop burning and energy use.  While some carbon can be captured in the soil, the agriculture sector is a net emitter.

The climate change problem has not been easy to overcome and will continue to be a problem.  Why?  First of all, the atmosphere is considered an open-access resource (see the sidebar) that nobody owns and everyone can use.  Consider all the countries that emit GHGs. Economic development results in pollution so reducing pollution means slowing economic development.  Is it feasible, or ethical for Canada to suggest that China and India reduce GHG emissions?  Can Australia and the US tell Canada to reduce emissions? If they did, how could they enforce it?

Economically, we can illustrate the problem as an externality whereby the private cost of production doesn’t reflect the social cost. Figure 11.13 shows the supply, or marginal private cost (MPC) and demand.  The equilibrium results in overproduction at Q. 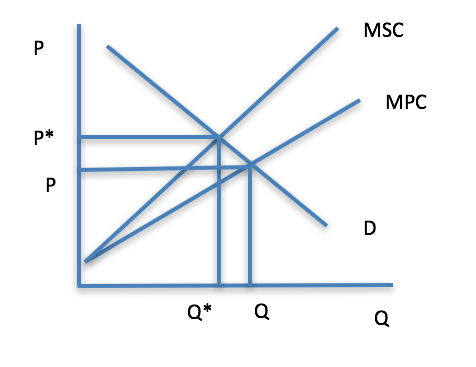 Production of Q goods results in costs that are not captured by the market. To illustrate the cost of the pollution that leads to climate change, would use the MSC or marginal social cost curve.  The new equilibrium results in lower production and a higher price.  How do we get to this point?  The market alone cannot force the point, so we need government intervention at some point.  We will consider two solutions: using a carbon tax or a cap and trade system.

A carbon tax is a tax to reduce consumption.  There are a number of ways this can happen.  It could be by sector (agriculture, energy, manufacturing, etc.) or by emissions (NOx, MH4, CO2, etc. ) or byproduct (meat, grains, vegetables, fruit, etc.).  Each method will have different implications for products and prices. 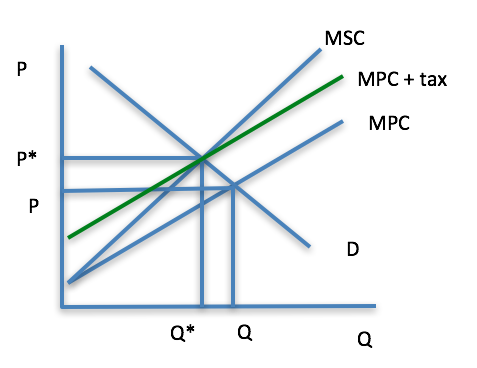 What are the benefits of carbon taxes?  First of all, higher taxes provide incentives to find alternative methods of production and consumption.  If, for example, ranchers are targeted for a carbon tax, the extra cost will be reflected in higher meat prices, causing consumers to reduce meat consumption.  It will then be in the best interest of the rancher to find different feed or different ways of handling manure so that the lower quantity of meat demanded doesn't affect long-term profits.

The second way taxes help solve the pollution problem is to reduce consumption (mentioned above).  The relationship defined by demand shows that as price increases, quantity demanded decreases. Lower production will therefore mean less pollution.  Finally, taxation is considered a double benefit.  Not only does consumption decrease, but the tax revenue can be used to solve the pollution problem by funding innovation, or cleaning the environment (if the government spends the tax revenue wisely).

Taxes can also lead to problems by shifting production from countries with strong regulations to those with weak regulations or without any regulations thereby shifting the problem.  This happens with everything from mining to manufacturing.

There are other practical problems as well.  In some cases, it’s nearly impossible to determine where the pollution is coming from.  This is called non-point-source pollution and, just as its name suggests, there is no identifiable point of origin making it difficult to tax the polluter.  The article by Sean Pratt (linked to Figure 11.15) discusses the implications of a carbon tax on farmers.

Figure 11-15: Article from the Western Producer provides an overview of the effects of a carbon tax. Source: http://www.producer.com/2016/10/farmers-wrestle-with-carbon-tax-fallout/ Permission: This material has been reproduced in accordance with the University of Saskatchewan interpretation of Sec.30.04 of the Copyright Act.

Another economic solution to the carbon problem is to create a carbon market using a “cap and trade” system.  This method requires that the government set an upper limit, or cap, on the amount of emissions allowed.  This would be determined scientifically based on current emissions and current industry operations.  The government then makes it mandatory to purchase the rights to emit GHGs.  A market is developed for trade so that businesses can buy and sell the permits.

A new market requires the cap to be set, and then an initial auction or distribution of permits.  The system also requires clear definitions about who is required to buy permits and initially, how many are available. It would be possible to imagine one company buying as many permits as are available to make sure their competitors didn’t get any and force them to go out of business.  There are many considerations in establishing such markets.

The benefits of a carbon market include flexibility and strong incentives to reduce costs.  Each business can determine the best way for itself to reduce the need to purchase permits.  In this way, businesses have incentives to find alternative production methods and at their own pace.  If a company can reduce emissions, it then gets value from selling its permits.  Another benefit is that over time, as companies reduce their costs and ultimately their emissions, the government can lower the cap to reduce emissions further.

No system is perfect and carbon markets are not without problems.  This method is complex and costly to administer and for the reasons mentioned above, it is difficult to determine the source of pollutants and to force certain businesses to participate.  It is also problematic determining what the cap should be – if it is set too high, the solution won’t be effective, but if it is set too low, it could cause economic hardship.

Finally, this system can cause free riders.  This situation occurs when others (not subject to the cap and trade system) can profit from business as usual without paying and at the same time continue polluting.  Free riders benefit from other companies or countries addressing the problem.

What will happen to farmers and ranchers, and others in the agriculture industry under either of these scenarios?  If you were to vote today, would you support carbon taxation or a cap and trade system, or do you think we should do nothing?

There are significant trade-offs in addressing climate change – what are they and how will producers and consumers be affected?  If you are assigned this topic, you will argue for a carbon tax/cap and trade system, or against it. What are the implications for sustainability?  Are there political considerations that should be taking into account?  Is it ethical to do nothing when considering future generations?  You will be required to conduct independent research and support your arguments.