We can now look at the effects of trade on producers and consumers. Again, we’ll use an agriculture example based on Canada’s comparative advantage in oilseeds. Let’s begin by looking at two markets – the Canadian market on the left, and the Chinese market on the right.

Our assumption is that Canada has a comparative advantage in producing oilseeds and that China is less efficient as evidenced by the higher domestic price in China. What would happen if Canada traded oilseed on the world market? As you will recall from Module 5, expanding the market will lead to an increase in demand. We also know that Canadians cannot influence prices in the world market so the demand curve Canadian suppliers face is flat, or totally inelastic. Figure 9-4 indicates this new demand curve as the world demand (Dw), which results in a higher world price (Pw). 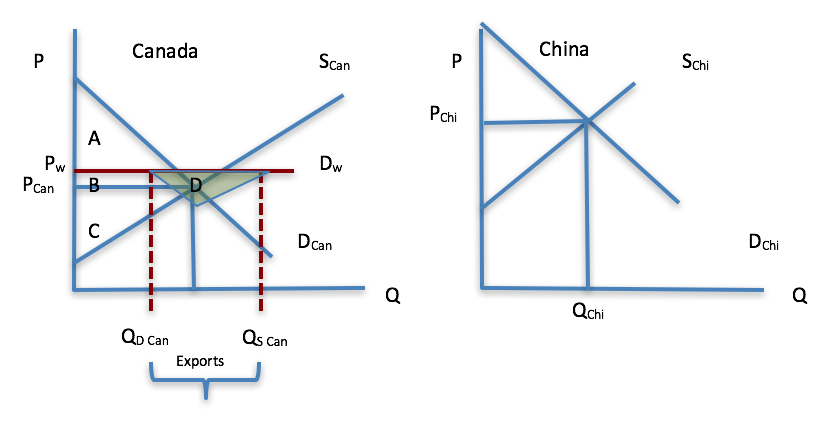 Canadian consumers are actually worse off given the new price, Pw, and reduce the quantity demanded to QD Can. The consumer surplus is now the much-smaller triangle above the price and below the demand curve.

Producers, however, have a greater incentive (Pw) to supply more and so they move to QS Can by increasing production. Notice that price has changed causing a movement along both the supply and demand curves. The effect to producers is positive resulting in greater producer surplus. When we look at the total effects, we can determine that the overall or net effect is positive. The total amount gained through trade is the green triangle, which makes producers better off. Table 9-3 measures the gains from trade.

Canada, before trade, shows consumer surplus from oilseed consumption to be the areas A plus B. Producer surplus is area C. When the price increases to Pw, consumers will decrease consumption and suffer a loss in consumer surplus equal to area B. However, producers increase supply and export the different (Qs Can – QD Can). Because the price is higher, producers add the area B plus the new triangle D. The area B is really a transfer in welfare from consumers to producers so has no effect other than reallocation. The end result is a net gain to welfare equal to the area of  D. While consumers lose in this case, producers gain a greater amount resulting in overall gains from trade.

Let’s take a look at how the import country fares from trade in Figure 9-5.

Because China does not have a comparative advantage in oilseed production, they should import from Canada. From China’s perspective, the world supply is Sw and the price is Pw. This curve is also flat because the Chinese cannot influence prices through production.

The world price, resulting from more efficient production, is lower than the domestic price (PChi). This is good news for Chinese oilseed consumers who will increase consumption to QD Chi by sliding down the demand curve. Producers, who are not efficient, will reduce production as a result of the lower price, supplying only QS Chi. Without trade, this discrepancy between supply and demand would result in a shortage. But with trade, the Chinese can meet demand at a lower world price by importing the difference.

We can also measure gains and losses by looking at changes to consumer and producer surplus in the Chinese market. Table 9-4 shows us the producer and consumer surplus before trade. Opening up trade with Canada to increase imports *QD Chi – Qs Chi), results in a gain to Chinese consumers (Y plus W) and a loss to Chinese producers (minus Y). The gain and loss of the amount Y results in no net change. However, the total gains from trade are measured by the area of triangle W. 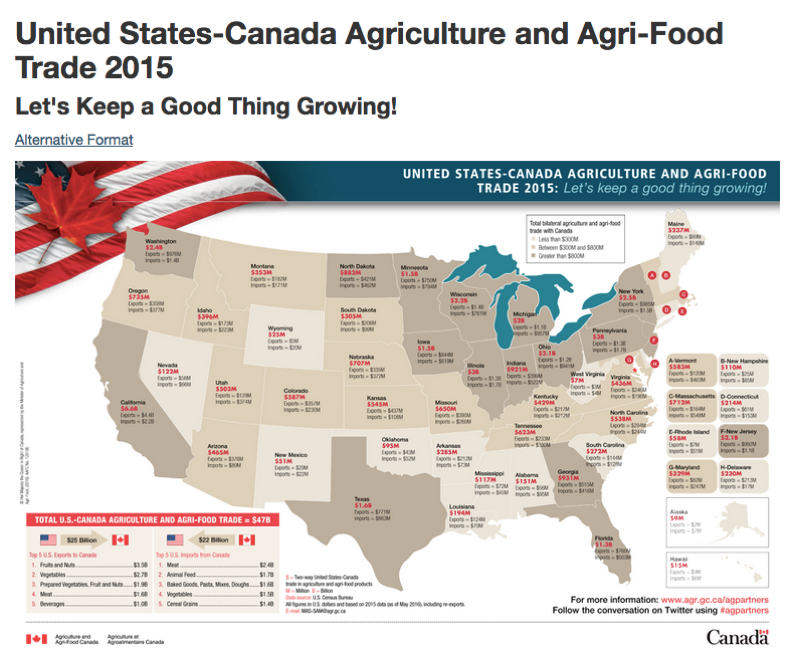 Figure 9-6: Trade in agricultural products between Canada and the US. Source: This material has been reproduced in accordance with the University of Saskatchewan interpretation of Sec.30.04 of the Copyright Act.

What kinds of agricultural products do we trade today? Take a look at the types of food and beverages that move across the border with Canada’s biggest trading partner – the US. Click on the image above and follow the links to see the top export and import products.

The top exports to the US (or Canadian imports if you are an American citizen) meat, animal feed, baked goods, vegetables and cereal grains. This list suggests that Canada has a comparative advantage in the production of these products, which is not surprising given our vast expanses of agricultural land.

In terms of the top imports from the US, we are not surprised to see that the US has a comparative advantage in fruits and nuts (difficult to grow in Canada), vegetables, prepared vegetables/fruits/nuts, meat, and beverages.

Name a product and the country we import from.

Consider where our clothing comes from. While the US might grow tons of cotton, most garments are manufactured in places like Bangladesh and India because the cost of labour is relatively cheaper in those countries. China produces all sorts of manufactured products because it has a comparative advantage in labour and mechanization. Brazil and Ecuador grow coffee. Silicon Valley in California produce ideas and new technology. Finland has a comparative advantage in innovation for bio-production.