There is also value to the consumers that we can estimate using the same framework. Let’s look just at the demand curve for a minute. In Figure 7-6, we’ve got a demand curve and a price (assuming that where price intersects demand is where the supply curve would be).

Demand is sometimes called willingness to pay (WTP). Think of it this way. If you came crawling out of the desert, what would your willingness to pay be for one glass of water? Relatively speaking, probably pretty high. As you consumed increasingly more water (that is to say as the quantity of water consumed increased as measured on the x-axis), your willingness to pay would fall. We could even reach a point where you were being flooded with water and you would actually pay someone to remove water. In other words, you would be willing to pay someone to take away water. 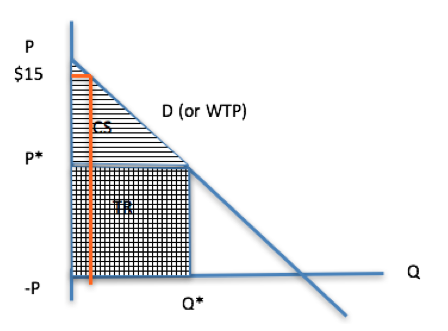 I’ll give you a personal example, and I’m guessing you have many of your own. I went to the store to buy a book. It wasn’t really expensive, maybe only $15. I was prepared to pay $15, but perhaps not that much more. When I got to the cashier, I found out the book was 40% off. So, rather than paying $15, I had to pay only $9. If you look at the orange line in Figure 7-6, it represents a quantity of 1 book, and my willingness to pay $15 as read from the demand curve. The price line is much lower though – it’s at $9. For one book the revenue was $9, but my consumer surplus (the value that stayed in my pocket) was $6.

When the demand curve represents the market, we could theoretically organize all potential buyers from highest WTP to lowest, which could be negative – ever hear someone say, “you’d have to pay me to…?” Because there are many people willing to pay much higher than the market price, we can add that unpaid value to consumer surplus. We can keep adding as we slide down the demand curve to the point where WTP = price. Beyond that point, WTP is less than the price and people will not make any more purchases. Consequently, the shaded triangle above TR but below demand is consumer surplus.

What is consumer surplus if the price is zero?

Consider a case where a price is zero. What products or services might have a price of zero, but for which there is a demand? Quite often farms produce environmental goods and services that are not traded in markets. We might also consider recreation experiences. Have you ever gone to a lake to boat or canoe and there was no fee or price? Did you get value from the experience? 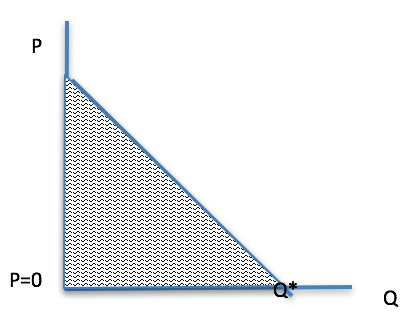 The graph above shows a situation where the price is zero and the quantity demanded is Q*. People will not consume any more recreational trips after this point because they have no value (there would only be negative value… you’d have to pay me to…). You will see that total revenue is zero (P x Q = 0 because P=0). What is the consumer surplus? If you said the entire shaded area you would be right. So in this case, the total value is equal to consumer surplus. There’s value for things we don’t pay for.