We started the last section by talking about how the world might be running out of water.  What about fuel?  Because most of our energy comes from non-renewable resources (oil, coal, gas, etc.) it will likely happen one day that we have used all there is, or it becomes too expensive to extract.  Through science and technological development however, we could switch (to a certain extent) to renewable energy in the form of hydro, wind power, solar power, and bio-energy.  The latter involves using wood by directly burning it, or through gasification.  Another possibility, particularly appealing to farmers, is the increased use of biofuels derived from agricultural crops.

Let’s first look at the production trade-offs.  We will assume that a farmer can grow a crop for food, or a crop for fuel. Figure 11.4 illustrates a production possibility frontier for two crop types – one that produces food and corn that can be used for ethanol. 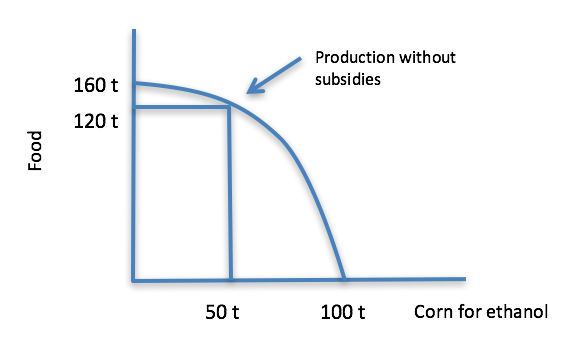 The farmer would choose to grow a specific combination of crops based on land productivity and of course the price he could get on the market for each crop.  Let’s assume that it would be at the point where food was 120 tonnes, and corn was 50 tonnes.

What do you think the farmer would do if there were a subsidy to produce corn for ethanol?  If you answered, “produce more corn,” you would be right.  But why does the US government subsidize corn?

Since its creation of the domestic market for corn ethanol after the energy crisis of the 1970s, the federal government has nurtured and maintained the ethanol industry with a steady stream of subsidies.  Originally sold as a way to achieve energy independence and reduce greenhouse gas emissions, ethanol has been a favorite of many lawmakers:  ethanol producers have received favorable treatment under the tax code, tariff protection from foreign competition, and even a government mandate for its use. As a result, taxpayers have spent billions of dollars over the last 30 years subsidizing the production of corn ethanol, while at the same time creating unintended costs for consumers and the environment. – Taxpayers for Common Sense, 2015

The US government transfers money from taxpayers to farmers to encourage corn production allegedly to sustain farmers’ livelihoods, to promote energy security, and to sustain the environment (whether the policy is ecologically sound and economically sustainable is hotly debated).

Figure 11-5a: Production possibilities frontier with subsidies Figure 11.5b: Reduction in supply for food. Permission: Courtesy of course author Hayley Hesseln, Department of Agriculture and Resource Economics, University of Saskatchewan.

From a social perspective, we can say that subsidies will encourage farmers to grow more crops for energy, thereby reducing the number of crops grown for food.  That would be represented by a move to a new point on the production possibilities frontier as seen in Figure 11.5a, and ultimately, a shift in supply to the left (Figure 11.5b).

Taking this argument one more step: as the supply of food decreases, the price of food will necessarily rise.  While the farmers are making considerable economic gains, it is at the expense of consumers (and taxpayers). Amelia Urry explains how subsidies work, and the types of effects they can have in the market – click on Figure 11.6.

Figure 11-6: US agricultural subsides explained. Source: http://grist.org/food/our-crazy-farm-subsidies-explained/ Permission: This material has been reproduced in accordance with the University of Saskatchewan interpretation of Sec.30.04 of the Copyright Act.

Government intervention into markets can dramatically alter how goods and services are allocated, which usually results in deadweight loss, and in the case of corn, overproduction and adverse affects in other markets at home and abroad.  For example, the price of corn (for food) rose between 2007-2009 as a result of lower food supplies, thus negatively affecting Mexican consumers who use corn as a staple food for tortillas and other dishes.

Figure 11-7: Farm subsidy database for the US. Source: https://farm.ewg.org/progdetail.php?fips=00000&progcode=corn Permission: This material has been reproduced in accordance with the University of Saskatchewan interpretation of Sec.30.04 of the Copyright Act.

You can read more about agricultural subsidies in the US and their pervasive effects to consumers (Figure 11-8) in an article by the Economist.

Figure 11-8: This article by The Economist explains the effects of agricultural subsidies in the US. Source: http://www.economist.com/news/united-states/21643191-crop-prices-fall-farmers-grow-subsidies-instead-milking-taxpayers Permission: This material has been reproduced in accordance with the University of Saskatchewan interpretation of Sec.30.04 of the Copyright Act.

While we looked at farm subsidies in the US, Canada also subsidizes farmers.  Conduct research to determine what crops are being subsidized and the types of programs used to transfer funds to farmers (crop insurance, direct payments, etc.).  What are the effects of agricultural subsides in Canada and how might they distort markets and efficient allocation of resources?  What are the effects of subsidies on free trade?  You should also consider who benefits, and who pays.

The main question is, “should Canadians subsidize agricultural production?”